A Brief Dispatch from “Veils & Icons,” at Creative Alliance by Don Cook

Eric and Bovie Show at the G-Spot, Saturday Dec. 8

A Brief Dispatch from “Veils & Icons,” at Creative Alliance by Don Cook 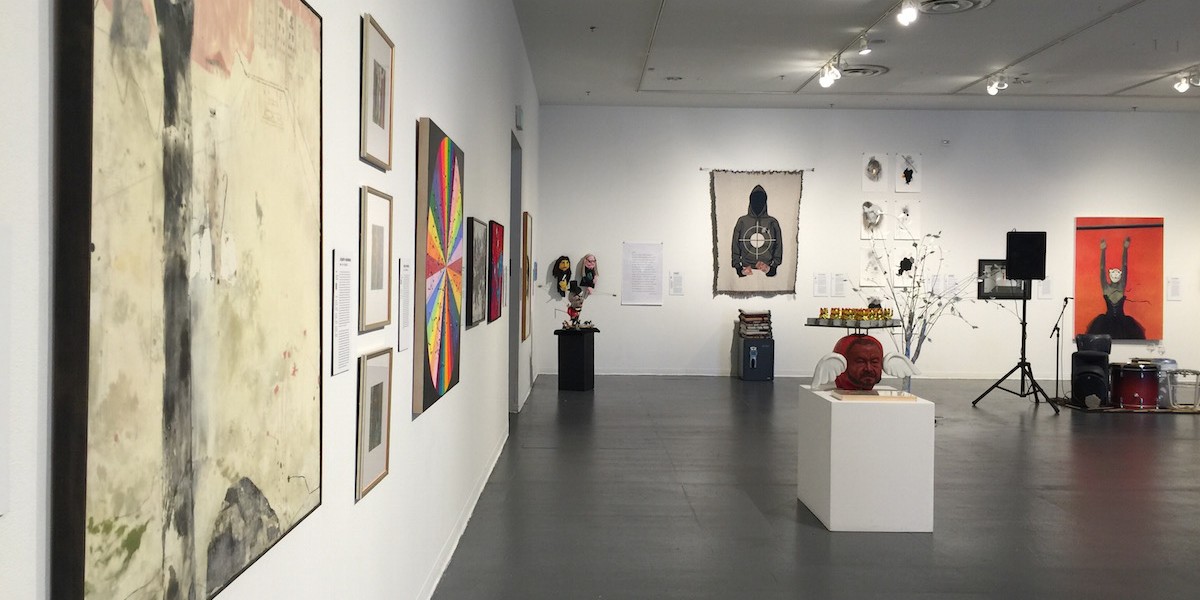 The relationship between art making and risk in today’s art market can be illustrated by the following little parable: An artisan is commissioned to make a pair of dice. This artisan gets so caught up in making a stunning product, or so captivated by their reflected image within the objects’ polished surface, that they forget the purpose of what it is they are crafting. By the time the finished dice get to the showroom they are fatally stilled objects, meant to be admired only for their surface value. The dice are now a pair of precious objects, so removed from their original purpose that no one would think to pluck them from the wall or off their cushioned pedestal and upend the universe by throwing them. The essential, disturbing nature of the dice – that they are agents of disruption, meant to expose everyone, makers and players alike, to the terrible beauty of risk – has been conveniently lost.

These days it takes courage (and some inspired lunacy) to craft a credible, elegantly turned work and then, with equally decisive and unwavering elegance, collapse that work into the leveling realm of Chance – but that’s exactly what happens at the visible heart of Erin Cluley and John Moran’s credible and polished exhibition, “Veils & Icons,” at Creative Alliance, through December 16. To willingly gamble with one’s own handiwork is a brave act, especially when that handiwork is handsome and could easily hold its own in the market stalls of Galleryland. The merits of John Moran’s operatic-scaled iconic images of his muses, and Erin Cluley’s sensual dramas whispered through patterned veils are considerable – but what really gives this show its off-road visual traction is “Veils of Indulgences,” Erin Cluley’s conjunction of hanging screens.

“Veils of Indulgences” is an eccentric array of six tall, narrow Mylar sheets located off-center within Creative Alliance’s main gallery. A large rectangular screened window comprised of tiny hand-cut cruciform apertures perforates each sheet. The conjunction of these six Mylar screens is more architecture than object. Instead of pausing to regard it, you find yourself immediately lured into its translucent chamber – and once enfolded in this structure the conventions of static viewing crumble. The exhibition’s images dissolve or collapse entirely, and recombine themselves, pixilated and animated within the shifting patterns of the screens’ apertures. Passersby are caught in this kaleidoscope, leaving fleeting, delicious afterimages of themselves.

All of the exhibit’s eternal and immutable elements – art history, faith, sex, the entitlements of identity and self-expression – are made ephemeral, fugitive, and contingent – and you’re left with the pure, ass-kicking turmoil and wonder of just SEEING. Yes, indeed – “Veils of Indulgences” is a sure-footed riff on Charles Baudelaire’s pivotal observation that “The Painter of Modern Life” engages “the ephemeral, the fugitive, the contingent, the half of art whose other half is the eternal and the immutable.” And Erin Cluley – in collusion with John Moran – visually riffs on this old dialectic just like jazz players catch an old tune and run with it. And run with it these two painters of modern life do – with bravery, wit, and a spirit of invention that’s to be applauded – and SEEN and seen again.