Jerry Saltz is a Cat Person and So Are You

kind of weird, but … 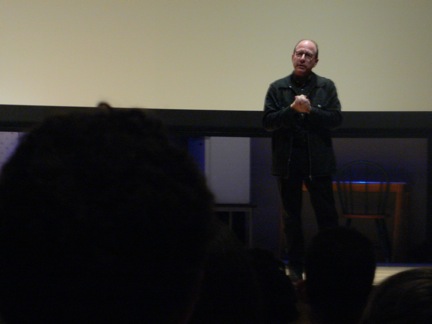 Jerry Saltz loves to talk. The well-known art critic for New York Magazine confided all sorts of odd tidbits of information today at MICA in Falvey Hall. More like an episode of ‘Curb Your Enthusiasm’ than a lecture on art criticism, Saltz tormented and tickled the MICA crowd with a wicked glee, mocking art students good-naturedly and, ultimately, encouraging the hell out of everyone who attended.

Jerry Saltz is a little bit jealous of Jeff Koons. Who can blame him? Saltz was supposed to lecture last week, but didn’t show. My theory is he didn’t want to compete with Jeff Koons for bodies in his lecture because he got bumped to the smaller auditorium. He began his lecture with a credible impersonation of Koons, “I love everybody. I love the art market. I love my asshole…” and did sound a lot like Ronald Regan and John McCain, which he noted. I think he was actually counting the number of empty seats in the audience, of which there were only a few, and wondering if Koons had a full house the week before.

Jerry Saltz is an idealist. Can art change the world? Saltz asked, and actually garnered answers from the crowd. Lots of yesses, a couple of maybes and a no, which is interesting considering that most of the crowd is paying for art school. He said they were all correct. Huh? “It’s not going to stop the spread of AIDS or increase crop yield in Sub-Saharan Africa. But art changes the world by osmosis, incrementally. We don’t really know what makes it work, but you can’t worry about that too much.”

Jerry Saltz has a small plot of grass growing on his countertop. He admitted this while discussing the ‘new academy’ in art today. “The nineties were about the body… lots of art with semen, with menstrual blood, with shit…” But now, according to Saltz we’re in the dawn of a new age. He urged us to embrace the chaos that is destabilizing the art world, because it is creating new opportunities for those on the rise. He asked the crowd to identify the new academy – what are you seeing lots of lately? – and people yelled out things like google images, two by fours, porn, garbage, mirrors, and grass. Grass? He said. “No, that’s just you, honey.” And then he admitted to having a fondness for grass and a plot of it on his countertop. And then someone yelled out DIAMONDS AND SKULLS.

Jerry Saltz has a winning strategy. At that point, he had to discuss Damien Hirst, but you could tell he was really excited to. “So what if you HATE Hirst? Everybody hates him. But guess what? His work is interesting. And I’ll tell you why.” Like a sage imparting wisdom to the devoted, Saltz instructed how to win, in any discussion dissing Hirst’s skull. “That skull integrates two ready-made contents: Wealth and Death. Hirst takes the two biggest issues of contention in the world today and put them together into one piece.”

Jerry Saltz knows how f’d up we are. He looks out at the crowd and deadpans: “Do you know how f’d up you are? You artists – you don’t want JUST to be loved, you want to be loved by everybody, everywhere, for the rest of time. You’re all dancing naked invisibly for the world all the time. Do you know how crazy that is?” Everyone in the crowd, including me, is thrilled to be called out on our bullshit. You know why? Because it’s true.

Jerry Saltz ‘gets’ the art market. The art market featured briefly as a subject in the lecture and Saltz dared the crowd to name the ‘Big Four’ who are mentioned in every boring panel titled ‘Art and the Market.’ Lots of guesses ensued and in the end he declared it was Hirst, Koons, Murakami, and Warhol. Ironically, these are all artists who run factory-style studios with dozens of assistants making their work. “Andy is in every breath we take,” he said, “and there’s nothing you can do about it.”

Jerry Saltz is a cat person. Saltz pitted the dog people in the audience against the cat people, daring people to share their dogs and cat’s names and then using it as a metaphor for how f’d up artists are. “You’re all cats,” he declared. “And so am I. What happens when you try to give your cat some love? They give you a backwards glance, then rub affectionately on the furniture and ignore you. All artists place a third thing – a piece of furniture (i.e. our ART) between us and the world, in order to receive love. How f’d up is that?? To you, your art is like a dog. It can shit on the floor, slobber on your leg, or ruin your life. You love it so much it hurts. But to everybody else, it’s a piece of furniture and it’s in the way.”

Jerry Saltz KNOWS artists. He knows their habits, behaviors, insecurities, and he knows how to make them fall in love with him. He told us that we all could be successful as artists, but it depended on how we defined success. To illustrate he described the difference between a “really sexy thirty month career” vs. a thirty year career. He claimed that success can also be defined as having a three-day workweek, in order to have adequate time to make your work. “If you build it they will come,” he intoned. If you keep making your work, success is inevitable.

Jerry Saltz is sick of art criticism that likes everything. “It’s my job to say what I think is good and what I think is bad. I can’t make or break your career. I can shine a light on it, but that’s it.” Then he posed a situation to the crowd, probably something he deals with all the time. “What happens if I write about you and I am negative to your work? And then we meet at a party and someone introduces us. What do you do now??” He described an irate artist yelling at him that he was “destroying their market!” and another who simply hissed “vendetta” into his ear. I actually thought this was the most interesting part of the lecture, because it’s an unavoidable situation – both for artists and for critics. One artist raised her hand and said she’d be cordial and then invite him to her studio. Saltz said that was a good move. Another artist said they’d make polite conversation, which was, apparently, another good move. “What you DON’T want is to make it so I can never write about you again, so just make me feel a little bit guilty and awkward,” he encouraged.

Jerry Saltz is in love with the world. “Pleasure is an important form of knowledge… It exists in the first kiss, the last goodbye, and in mathematical equations.” He said he walks around falling in love with people and things and scenarios all the time. Saltz claims that we should all just get our egos out of the way and stop trying to be so professional and so normal. He said that answers made for uninteresting art and that questions were good – especially when they yield “clunky dumb answers” that don’t make any sense. He said that art was good when the tools and the message were the same and that you can’t buy credibility. Why do you need credibility? “Well, I guess you really don’t,” he purred, “but I want it anyway.” Meow.