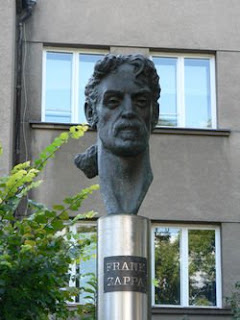 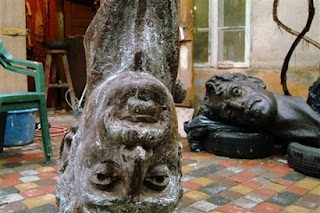 Frank Zappa was born in Baltimore in 1940 and, coincidentally, wrote and recorded a song entitled “What’s New In Baltimore?” Dweezil Zappa, his son, is bringing the ongoing Zappa Plays Zappa/“Tour de Frank” to the Ram’s Head Tavern there on the day designated to honor his late father. Far from a “tribute band,” Zappa Plays Zappa underscores the compositional genius of Frank Zappa much as a symphony orchestra would perform pieces by a master composer.

Article below reprinted from http://inmusictoday.blogspot.com from May 7, 2008:

Frank Zappa, who sang about “Plastic People,” has been cast in bronze. Again.

In 1995, a quirky bunch of Lithuanian artists and intellectuals managed to erect a bust of the eccentric rocker in downtown Vilnius, the capital of the former Soviet republic.

Now, they’ve given a replica to Zappa’s hometown. 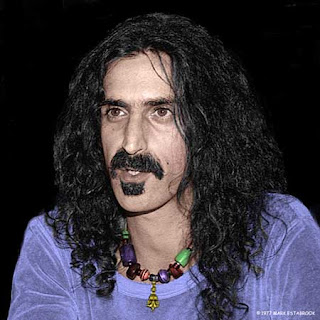 Saulius Paukstys, longtime president of a Zappa fan club, pitched the Zappa bust Wednesday to Baltimore’s public art commission, and the commissioners, clearly charmed by his dogged efforts, voted unanimously to accept the gift. They’ll figure out later where exactly to place it.

“It’s carved already, and it’s ready to be shipped to the U.S.,” said Arturas Baublys, a public relations consultant and Zappa admirer who joined Paukstys for the presentation.

Before the initial sculpture was erected, there was no known connection between Zappa and Lithuania. The mustachioed, antiestablishment musician was born in Baltimore to an Italian immigrant father and died of prostate cancer in 1993 at age 52, never having visited the Baltic state.

But his music was popular among the Lithuanian avant-garde, particularly after the country declared independence from the Soviet Union in 1990. Paukstys, an art photographer, launched the fan club and even set up an art exhibit with imagined correspondence between himself and Zappa, whom he had never met.

The club commissioned the bust from Konstantinas Bogdanas, a respected sculptor who cast many portraits of Lenin during the Soviet era. And members managed to persuade the mayor and city council to place it in a public square, in front of the Belgian embassy.

“It was just four years after independence,” Paukstys said through Baublys, who translated from Lithuanian. “The opportunity for this Zappa statue was also like a trial for the new system and the newly established democracy, if that (was) possible or not.”

Baublys noted that the bust is now the second-most popular tourist attraction in Vilnius after the Museum of Genocide Victims, which is in a former KGB building and includes prison cells and an execution chamber.

Paukstys and Baublys were both delighted at the friendly response from Baltimore, where last year Mayor Sheila Dixon proclaimed Aug. 9 as “Frank Zappa Day.”

“I think it’s an incredibly generous gift,” said public art commission member Steve Ziger, an architect. “I find the piece a good piece of art that I think we would be honored to have here. We just need to find an appropriate placement.”

Vilnius Mayor Juozas Imbrasas also advocated for the Zappa bust in a letter to Dixon.

“I hope that replication of the original statue of Frank Zappa in Vilnius and bringing it to Baltimore will perpetuate the memory of one of the greatest artists of the (20th) century,” Imbrasas wrote.

Baublys estimated the cost of creating and shipping the bust at $50,000. The city will be responsible for installation and maintenance.

Baublys said the project has the blessing of Zappa’s widow, Gail, who as head of the Zappa Family Trust has been protective of her late husband’s image and music. Gail Zappa’s attorney did not return messages seeking comment; neither did agents for two of Zappa’s sons, Dweezil and Ahmet.

The public art commission, created last year, has not always been so quick to approve projects. It effectively quashed plans for a statue of former mayor and governor William Donald Schaefer at the Inner Harbor after commissioners said planners should consider alternate designs and locations.

Sterling Clifford, a spokesman for Dixon, noted that Zappa belongs in the pantheon of Baltimore’s famously offbeat favorite sons and daughters.

“Like John Waters and a lot of artists we’re proud of,” Clifford said, “it’s a big deal that Frank Zappa is from Baltimore.”