A Gorgeous Use of Classic Baltimore Space … [...] 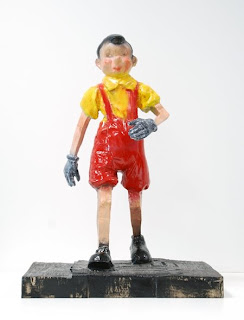 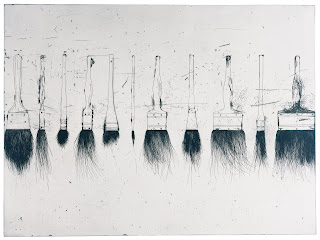 “I don’t deal exclusively with the popular image. I’m more concerned with it as a part of my landscape. Pop Art is only one facet of my work. More than popular images, I’m interested in personal images…” – Jim Dine, quoted in Art News, November 1963.

“The subject is me; my work records the history of me.” – Jim Dine, from Ann Shafer’s Curatorial Essay at the BMA 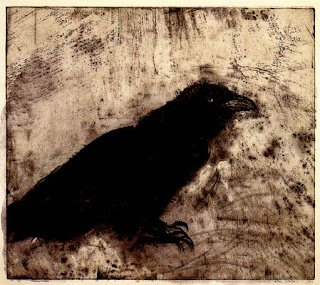 The BMA’s ‘Front Room: Jim Dine’ is a lean retrospective, at just over a dozen prints, with a few artist books and several Dine paintings in the next room over. Dine, now well into his seventies, is a revered contemporary master, who has made a career out of treading lightly on both sides of the Abstract Expressionist-Pop Art divide. For over forty years, Dine’s paintings, drawings, prints, and sculptures have depicted popular cultural artifacts with sensuous and nostalgic precision, combined with abstract, painterly surfaces. After a career of refusing to choose between content and process, you would think the art world would condemn Dine for waffling, however, this exhibit is proof to the contrary. 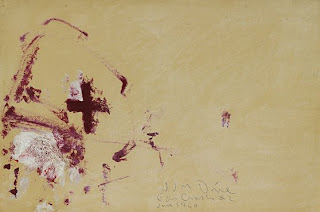 Composed almost entirely of prints, Dine’s exhibit of hearts, scribbles, hardware tools, and ravens could easily be mistaken for a group show. The BMA used works from their permanent collection to form the bulk of the exhibit, a few loans, a gift from the artist, and two new purchases from Pace Prints in NYC. Works run the gamut from Dine’s scribbley ‘crash’ series of five lithographs, which could pass for a Cy Twombley if you didn’t know about his famous car crash and performance piece, to a Carl Andre ‘cool’ minimalist grid in ‘Wall Chart III,’ then, to a Warholian plasticky pop in ‘Flo-master Hearts’ and ‘A Side View in Florida.’ The only obvious ‘Dines’ of the bunch are horizontal depictions of paintbrushes and tools, which combine an appealing feathery contour line with delicate nicks and abrasions from dremels, grinders, and chainsaws. A craggy self-portrait rounds out the exhibit, a Chuck Close-cropped and frontal view, the only work based on clear observation, with the artist’s features dissolving into loose squiggles. 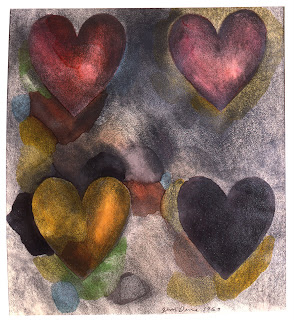 Those of us who survived graduate school know that if this were our show, we’d be criticized handily for veering haphazardly from one subject to another without developing one idea to its fullest extent. However, Dine’s body of work is proof that the evolution of one’s art doesn’t have to follow a linear path. 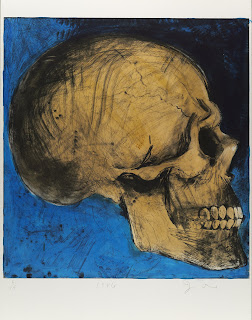 Dine describes himself as a “Romantic Expressionist,” which essentially means he imbues the images and elements of his childhood with layers of meaning, using them as metaphors for the human condition. Words like ‘evocative’ and ‘compelling’ and ‘nuanced’ are often used to elevate Dine’s meandering explorations, which are usually more about the collision of precision and chance than metaphor and meaning. According to Dine himself, the images are just symbols to ‘hang emotions on’ and his work aims to ‘strip away the boundaries between art and life.’ This, to me, is the best and most honest way to experience Dine’s oeuvre.

Like most things in life, Dine’s subject matter and style follow no set of rules or logic. Beyond the consistency of the print and plate, Dine is no purist, unafraid to test every tool and idea that entices him. Some of these works are trite and sloppy, or downright jibberish, and the artist is fine with this. Like the actual car crash in the 1960’s that he references but refuses to discuss, Dine is perfectly comfortable NOT explaining what his works mean, and possibly NOT even knowing. Rather, Dine uses his works as a way to process and connect with the world, to convert a mundane existence into poetic stopping places, and to break down barriers between art and life. This is a simple, yet revolutionary idea, and the reason that Dine is still besotted with his studio life today, not to mention tomorrow. Without explanations and without conceptual or stylistic labels, there is the sincere excitement that can only be cultivated through a healthy insecurity. 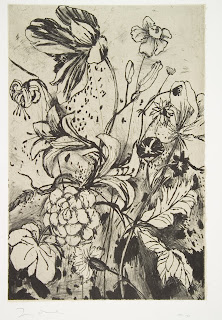 ‘Front Room: Jim Dine’ is not an immediate wow of a show. There’s a lack of subtlety, of cleverness and concealment, all hallmarks of today’s contemporary art world. Sure, Dine is a name worthy of dropping, but don’t see the show for this reason. Experience this exhibit for all that it is not and come away with something raw, palpable, and direct; and then live in this unselfconscious and passionate place for as long as you can. 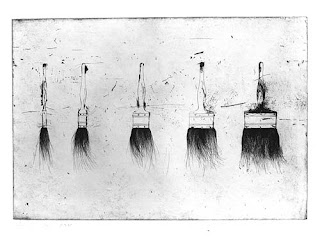 Study for the Boras Monument, 2006