“fresh” paintings and photographs at [...] 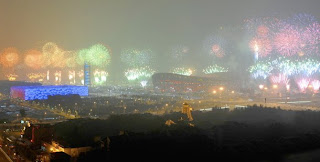 I was very excited to see the opening ceremony for the Olympics this year because Chinese artist Cai Guo-Qiang was hired to design the firework-laden display. I saw his show at the Hirshhorn several years ago which chronicled a series of failed fireworks projects in gunpowder drawings, and have followed his career since then. One bummer: I read today that some of the fireworks which appeared over Beijing during the television broadcast of the Olympic Opening Ceremony were actually computer generated. Fake fireworks? So what people saw here on TV wasn’t the same thing as the people in the ‘birds nest’ stadium saw in China? Apparently, the faux fireworks were set off earlier at the stadium because some of the maneuvers were too dangerous, so people watching it on TV saw a pre-recorded shot, integrated with the rest of the real ones by a computer. Oh well. There’s always got to be some kind of controversy.

CNN’s Anjali Rao talks to Chinese artist, Cai Guo-Qiang about his work for the Beijing Olympics.