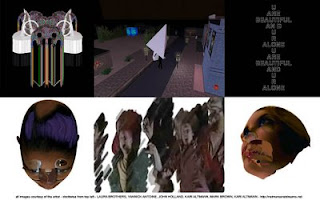 Through a combination of online platforms, the international participants in this show have pulled together their own creations, found material, screen grabs, and more that can somehow be described as a “Netmare” or “Netdream”.

What started out as a collaborative blog, eventually grew to other platforms (like Vimeo and Flickr) where it became an addiction to tag uploaded material at one end or another of the continuum between these two polar titles. In some cases things were tagged at both ends, in an ambiguous middle ground, or in a dimension beyond the reach of the spectrum itself.

As the amount of material grew, so did the definition for each term and the realization that it gave internet users relief to be able to classify the experiences they’re inundated with online as “scary” or “lustworthy”, both of which imply a level of intimacy and intimidation. Since post-structuralism the binary hierarchy has continued to be challenged, but in an online culture it can provide a highly accessible control among the struggle between technolust and technophobia, a duality reinforced by the media itself. Netmares/Netdreams aims to celebrate this continuum, mock it, test it, and ultimately transcend it.

While some participants have submitted their own artwork that already deals with these ideas, others are using it as a chance to exhibit detritus from their own net experiences.