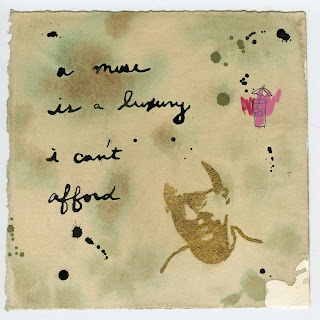 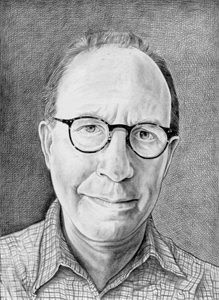 Portrait of Jerry Saltz. Pencil on paper by Phong Bui.

This July, while spending the summer in New York City, New York Magazine art critic Jerry Saltz paid a visit to Rail Consulting Editor Irving Sandler’s home in the West Village to talk about his life and work.

Irving Sandler (Rail): You arrived in New York in 1980; where did you come from, and what was your earlier situation in art?

Jerry Saltz: I’m from nowhere, which means the suburbs of Chicago. I went to art school in Chicago for a couple of years. I never got a degree—although I was recently given an Honorary Doctorate from the Art Institute of Chicago; I asked them to make me a cardiologist. After dropping out of art school I helped found N.A.M.E. Gallery, an artist-run space in Chicago. I co-curated over seventy-five shows there. Eventually, my artist friends started moving to New York. By 1980, I decided to join them and try to become rich and famous. I was twenty-six at the time, and I thought it was too late already.

Rail: What brought you into criticism?

Saltz: It was an accident. Charlie Parker said: “If you don’t play the saxophone for a year, you get a year better.” He could have added, “If you don’t play it for two years, you might not be a saxophone player.” After two years of not working at all and fretting about it all the time I stopped making art altogether. I haven’t made it since. I miss it. I miss being able to listen to music while writing, working with materials, and the amazing psychic space making art creates. Soon, I became a long distance truck driver; my CB radio name was the Jewish Cowboy. I’d come on and say “Shalom, partner.” While driving trucks I thought about how much I loved art and the art world. I knew I wanted to be part of that world no matter what. I thought writing criticism would be easy, so I decided to become a critic.

Rail: How did you first begin to write?

Saltz: I had never written anything in my life. To become a critic I read Artforum religiously. I wanted to write the way they wrote in that magazine, which seemed very cool, smart, and reserved, although I was secretly horrified because I barely understood a syllable of what I read. Worse, when I did understand what I read I kept thinking, “These people hate art!” At first I tried to write like that. Whenever I read what I had written afterwards I had no idea what I was talking about. I had all these other thoughts and feelings I wasn’t sharing. That’s when I began to change in my attitude about writing.

Portrait of Jerry Saltz by Yours Truly. Gold Leaf, Tea, and Ink on Paper. (Part of the Golden Age Series at Imperato last summer).

Rail: You came here to New York at the beginning of Neo-Expressionism. What was your response to it?

Saltz: I loved being in New York just as the invisible rigid rules and regulations of the late-70s were being scrapped. In the 1970s you weren’t allowed to paint, or to paint figuratively, and so on. I hated it. The early 1980s was a great time in New York. Things were forming. A generation was taking the stage. One could still be poor but in style. It was a homemade art world; everybody was making it up as they went along. It all had a whole new energy to it. I liked the smell of Schnabel’s oil paintings and the narrative in Fischl’s. I felt similarly about Basquiat and Haring. It took me a while to understand the Pictures artists. I used to be afraid to go into Metro Pictures gallery because it seemed so cool. Nevertheless, I knew right away that I didn’t want to be involved with only one style, medium, or “ism”. I wanted to experience all of it as much as I could. I hated when people said dogmatic things like, “Painting is dead,” or “I only like figuration.” My wife, art critic Roberta Smith, says, “Pleasure is an important form of knowledge.” I totally agree. My ideology is that I hate ideology.

Rail: What effect do you want your criticism to have?

Saltz: First, I want it to be interesting to read, not just be smart, dodgy, dogmatic, obtuse, or authoritarian. It kills me when someone says, “I started a review of yours and can’t wait to finish it.” When that happens I think I’ve failed; it’s my job to get the reader to read a review from the beginning to the end. Especially on newsprint, which people tend to pick up only once. If I don’t get someone to read me all the way through, I believe it’s my fault, not the reader’s. Other than not being read, the worst thing that can happen is being misread. When someone thinks I’ve liked something that I thought I was saying I disliked, I know something’s way off in the review—not in them) that I wasn’t clear or convincing enough. I like clarity and density. I’m interested in a maximum amount of information in a minimum amount of space.

To read the entire interview on the Brooklyn Rail, click here.