Symposium: Painting in the 21st Century at The Phillips on Sept. 27

Symposium: Painting in the 21st Century at The Phillips on Sept. 27 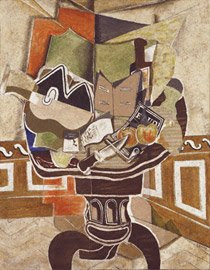 Can anyone tell me why Blake Gopnik, the painting elitist, is on this panel? It has been documented over and over – he doesn’t LIKE painting. In large quotation marks, Blake Gopnik has repeatedly said that he hates realism, drawing, sculpture, and regular old photography, too. He has also declared the death of painting in various and sundry lectures. It is a wonder that he keeps being included in these things and that he’d WANT to do them.

What DOES this art critic like? Video and manipulated photography. Oh, and controversy. And that is about it.

Although widely proclaimed dead in the 1980s, painting has returned to prominence in recent years. This symposium will examine the state of contemporary painting from a range of perspectives, embracing the artist’s point of view and those of the art historian and critic.

Braque painting in the Phillips Collection

The fee for “Symposium: Painting in the 21st Century” is included in museum admission. For further information, e-Mail the Center for the Study of Modern Art
or call 202.387.2151 x 286