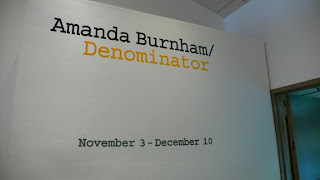 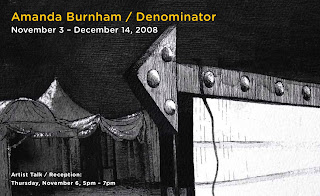 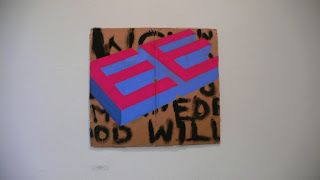 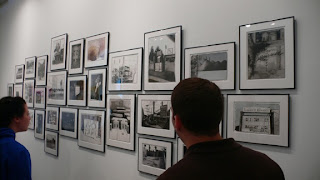 Labyrinth of Signs by Benjamin Lima

Amanda Burnham’s work offers views of archetypal contemporary American landscapes, skillfully modulated with distinctions between color and monochrome; between abstraction and realistic detail; and between illusionistic perspective and flat, collaged surface. The control of all these different dimensions allows us to explore directly such symbolic aspects of these vernacular environments as remain hidden or implicit when we see only their surfaces, as in photographs. 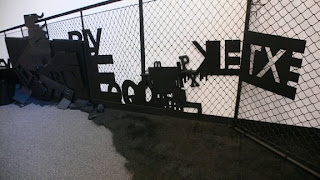 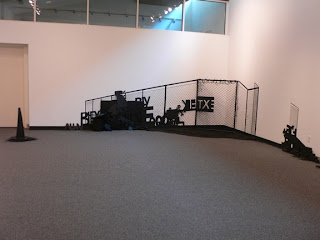 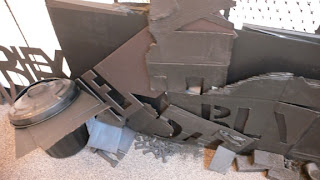 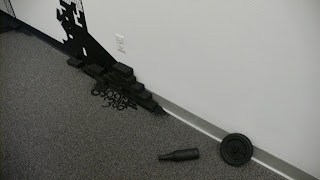 Whether moving through a city, suburb, or exurb, a highway traveler will often encounter two different orders of signage. Glowing corporate brand logos coexist with more furtively produced but equally visible spray-can graffiti. Although produced by opposing social factions, strikingly, these two kinds of signs occupy the same register in Burnham’s Gulf and Front Lines. Both are painted with an unnatural saturated palette that clearly derives from the lab and not from nature. The bright integrated brands of logo and graffiti muscle their way into the pictorial foreground, while the surrounding environment remains in the muted monochromatic background. This reflects the ironic reality that an immaterial corporate logo actually has a longer lifetime than any given physical commercial building, which might be built and demolished as quickly as the economic cycle demands. 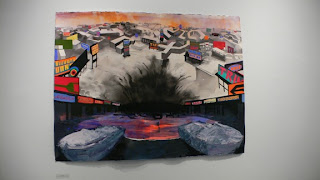 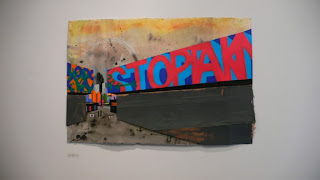 Here the lettering of both types of signage is carefully shaped and then abstracted so that it connotes its objects without carrying a precise denotation, showing us no particular brand, but instead the idea of a brand. In a parallel fashion, the physical elements of the landscape – large commercial buildings and chain-link fences – are rendered as nearly abstract. Buildings appear as simplified large blocks: the pair of cruciform towers in Front Lines, or in a panorama of interlocking shapes in Gulf. Fences, meanwhile, verge on being pure diagonal grids. In each case, we see an ambiguous flow between several different levels of things and their representations. The semi-abstract environment of letterforms, building blocks, and fence-grids comes to resemble a kind of three-dimensional diagram or plan, as much as it resembles a realistic view 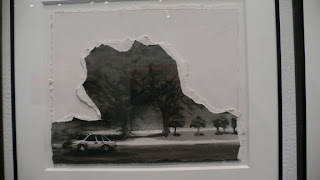 In some of the works, the ambiguity between work-as-object and work-as-image is emphasized by the application of cardboard panels to the surface of the painting. However, even within the pictorial window, any clear sense of a unified, readable space, and the viewer’s mastery of it, is frustrated. The works depict a world that is labyrinthine and difficult to navigate. This labyrinthine aspect and the presence of the deliberately haphazard cardboard panels are tied together thematically. Both suggest a disaster scenario, in which the physical structure of the environment is blurring and disintegrating, and in which artworks such as these must be pieced together from the materials at hand (i.e. scrap-cardboard). Furthermore, the suggestion of a disaster also might be open on to an interpretation of the techniques of abstraction discussed above. These pictures show the viewpoint of someone desperately trying to escape, whose view of the surrounding environment is therefore a blurred or distracted one, so that its precise details are left unclear, leaving only the semi-abstracted diagrams, such as those we see in Burnham’s work. 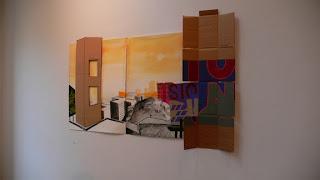 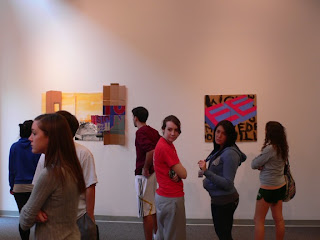