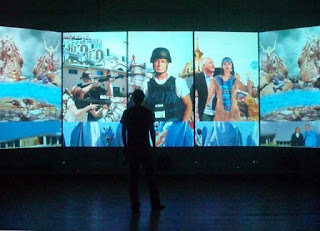 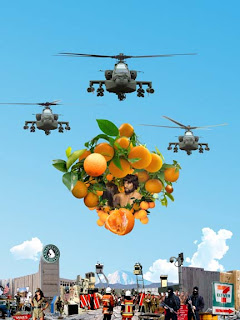 In the rear space we will project the LIVE election results as they unfold before our very eyes.

GAMES and PRIZES provided by The Library including… Pin the Lips on the Pitbull, Gambling Away Your 401K, Political Pop-Quizzes… AND MORE!!! (Proof of voting required, but we’ll make special exceptions for absentee ballots.)

A collaborative project between The Library and Curator’s Office.
This exhibition is free and open to the public. BYOB.

This mesmerizing work was presented at The Isabella Stewart Gardner Museum in 2007. The museum’s press release states: “Cliff Evans treats images like found objects, mined from the vast reference library that is today’s Internet. His video projection, Empyrean is a digital polyptych with photomontage animation that recalls the form of 15th-century Northern European altarpieces merged with contemporary advertising narratives.

Scene after scene of Evans’s five-channel projection has deliberate order and disquieting disorder, creating a loose but provocative narrative around the subjects of power and population control, coded with interesting and often humorous subtexts. Empyrean’s themes are developed through an absurd juxtaposition of both benign traditions and disturbing pathologies: wellness tourism, missionary practice, and militaristic domination. Evans’s extensive investigation into his subjects is enhanced by a trained eye and impressive skill using image detail and color.”