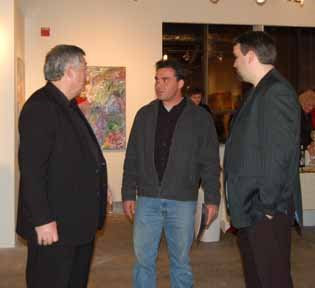 Students in front of Steven Pearson’s ‘Too Good, Too Evil’

The American Contemporary Gallery in Annapolis, MD is a new addition to the art world. Its second show, New Visions, opened on Friday, December 5th to a respectable crowd. The show itself is a diverse group of painters with vastly different styles and intentions. The only predictable part of the show is the level of craft that Director John Bodkin demands. Bodkin takes considerable care when choosing artists for the gallery. The works of Steven Pearson, Janie Paul, Robert Mirek, Tony Henson, Carol Carter and Alan Soffer come together to create a visually stimulating experience.

Painting by Allen Sofer with Carol Carter’s paintings in the background.

Within the show a few pieces stand out amongst the rest. Immediately in the foyer of the gallery hangs “Some Heroes Step Forward”, one of Steven Pearson’s bold wood grain abstractions. The combination of his use of comic book colors and the overwhelming scale of his pieces gives the impression of complexity and simplicity at once.

Alan Soffer’s rich, textured acrylic paintings also stand out and immediately draw the viewer in to investigate. His largest piece in the show, “Lapis Lazuli”, successfully blends a saturated grid pattern with muted misty color, giving the impression of a disappearing map.

Texture is a strong element in the show. Tony Henson’s abstract expressionism pieces are full of rich texture created with brushes and fingers. Robert Mirek’s amorphous oil paintings stand about an inch off of the panels they are painted on, thick enough to cast a shadow. They are more like paint sculptures than traditional paintings. Unfortunately, his textured paper pulp sculptures are not as strong and seem out of place.

Also out of place are Carol Carter’s realistic forms. While the colorful figures in “Mixed Messages” are intense and intriguing, it’s hard to place them in a show dominated by abstraction. Janie Paul’s subtle dark mixed media pieces integrate more successfully. They still have recognizable forms, “Sudbury 1” contains a panoramic landscape, but it’s also layered with abstracted patterns and line, which makes her work more cohesive with the show.

Overall the show was successful. While the selection of pieces perhaps should have been edited in that small of a gallery, it is refreshing to see contemporary art in old town Annapolis. John Bodkin’s enthusiasm is effusive. The next show, Works on Paper, opens in January.