Everyone An Artist – an Art on Purpose Project 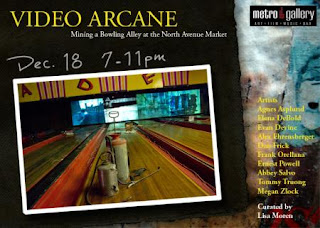 On Thursday, December 18, 6-9pm, “Video Arcane” will open an interactive exhibition where the audience is invited to create a live mix of video and animation projected on the Metro Gallery’s large windows facing Charles Street. The exhibition highlights part of Baltimore City’s treasured passed. Until1988, the upper floor of the North Avenue Market (Baltimore City) held a thriving duck pin bowling alley. In order to explore these nearly forgotten treasures,10 artists mined the bowley alley while animating, documenting and extracting audio from the site. The artists are Fellowship students from UMBC’s Imaging Research Center, mentored by interactive artist and Professor Lisa Moren. The students built light sensors that were attached to found objects scattered amongst bowling lanes, and viewers were invited to explore the dark space with flashlights. As light found its way to an object, a horizon of video began to mix and layer images and sounds where the bowling pins used to be. These sensors triggered a digital archive of video and animation that were created by the artists and displayed on 4 video projections. In addition to the flashlights triggering light sensors, a drum set and trumpet were rigged with trackpads and light sensors. When a drum was struck or a trumpet button was pressed, an audio clip from the archive was played over speakers.

For the opening of this exhibition, the artists will recreate the drum interface and invite viewers to ‘play’ video, animation and sound from the site onto the Metro Gallery’s large windows facing Charles Street. Objects from the bowling alley have been reinterpreted by the artists and are on display in the gallery, along with 360 degree panoramic prints, and a 10 minute video documenting the interactive flashlights and site specific video, animation and audio produced for this project.

This exhibition was made possible with the generous support from UMBC’s Imaging Research Center. We wish to also thank UMBC’s Department of Visual Arts Film/Video Cage for additional equipment.