One opens at Tilt Wednesday, May 27

Framing the Message of a Generation by Holland Co [...] 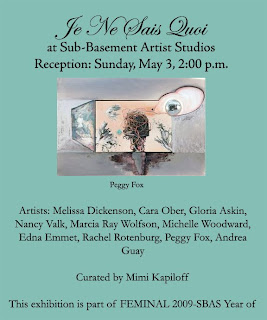 A group of ten women were chosen all using different mediums to express themselves in visual and tangible forms. “Je ne sais quoi” means in English- I do not know what. As in many languages, that “something” gets lost in translation. Just as in the verbal, the visual translation can be elusive.