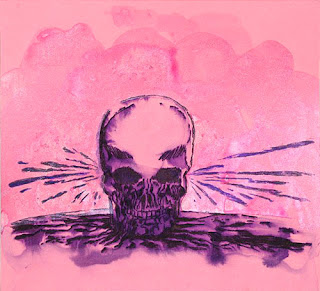 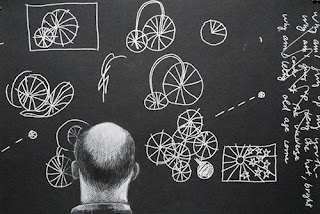 In his first solo exhibition with Civilian Art Projects, artist Ryan Hill curates content from the “digital museums” of Google, YouTube and Flickr and reassembles it as works on paper in the gallery space. Quoting, tracing, and drawing from internet images, the artist describes his intimate installations as “a free range of associations, from the gothic to the absurd.”

Ryan Hill is a consummate observer. Anyone who knows him and may have seen him discuss a work of art may have experienced his ability to take an image apart and draw unexpected relationships. While many of us are unable to carry on a conversation about a particular artwork after a given time, Hill has what appears to be a secret way to endlessly, and effortlessly, distill information from images, transforming their meaning in his mind, and making them come alive in conversation. 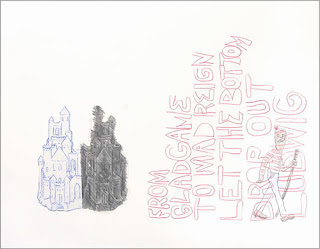 In his drawings, Hill takes advantage of his ability to observe and contrast to create compelling and enigmatic scenarios. He often takes a seemingly conventional or cliché image — say, a skeleton, a scary clown, a death metal fan wearing corpse paint, Walt Disney’s portrait, a Tasti Dlite container — and then works around its various implications, observing it as he draws it, from various conceptual and visual angles, and more often than not pitting one image against another. The juxtapositions at times display a playful absurdity (for example, a little girl dressed for the Day of the Dead thinking of a snarling blue gorilla). This is primarily why Hill’s approach is conceptual at first, but then allows the magic of free association to take place.

The works included in Everything Must Go at Civilian Art Projects display a diverse array of drawing approaches and topics that range from Hollywood (Hill is extremely knowledgeable about film) to underground and popular culture in general. In a way, they become a catalogue of personal but also collective obsessions, intermixing the innocent with the perverse, similar to a personal drawing that one may find in the back of one’s high school notebook. In sum we are presented with a mélange of humor, darkness, and fantasy. 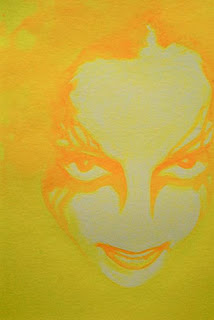 Hill’s drawings are the work of a wandering mind, a peripatetic observer who learns about every object as he draws it. The juxtaposition of imagery — plants, faces, flowers, skeletons, blobs — are the equivalent to the principles of comparative literature. Hill is a comparatist of the visual language, proficient in both the language of popular culture and high art. His drawings are personal essays in the spirit of Michel de Montaigne, intermixing the serious intellectual speculation with the casual anecdote and autobiographical reflection. These are intellectual doodles of an artist that draws something while thinking of something else, which results in a third something which merges thinking and doing. Hill is a natural conversationalist, so when his hand goes to the paper, it records his conversation with himself. This is what makes these works so refreshing, deceptively simple, and witty in the absurdity and surreal detail they embrace. His straightforward, personal and humble approach makes it easy for the viewer to partake in Hill’s own discovery process, where he is changing something as he draws it. I always feel that he is no less surprised of the result as we are.

Come to think of it, I suspect that the true secret of Ryan’s looking is no secret at all — it is nothing but a completely honest, natural and transparent act of looking and describing what one sees. And that is something so difficult to do that perhaps one can only be born with it. Most of us weren’t, but we can still have Ryan and his drawings to show us how it’s done, and, if we look carefully, we can feel that we are walking along with him, observing in a way in which, because everything is interesting and everything comes into his mind, and because filtering would prevent the associative accident and the transparency of the exercise, everything must go — onto the paper.

Founded in 2006, Civilian Art Projects is Washington, DC’s newest gallery gnawing at the edges of contemporary aesthetic discourse. Through a challenging exhibition series supporting promising, up-and-coming artists working in a broad range of media, and through exciting events of cultural and social significance held throughout the season, Civilian will generate new energy, ideas and momentum thereby contributing to culture and community.