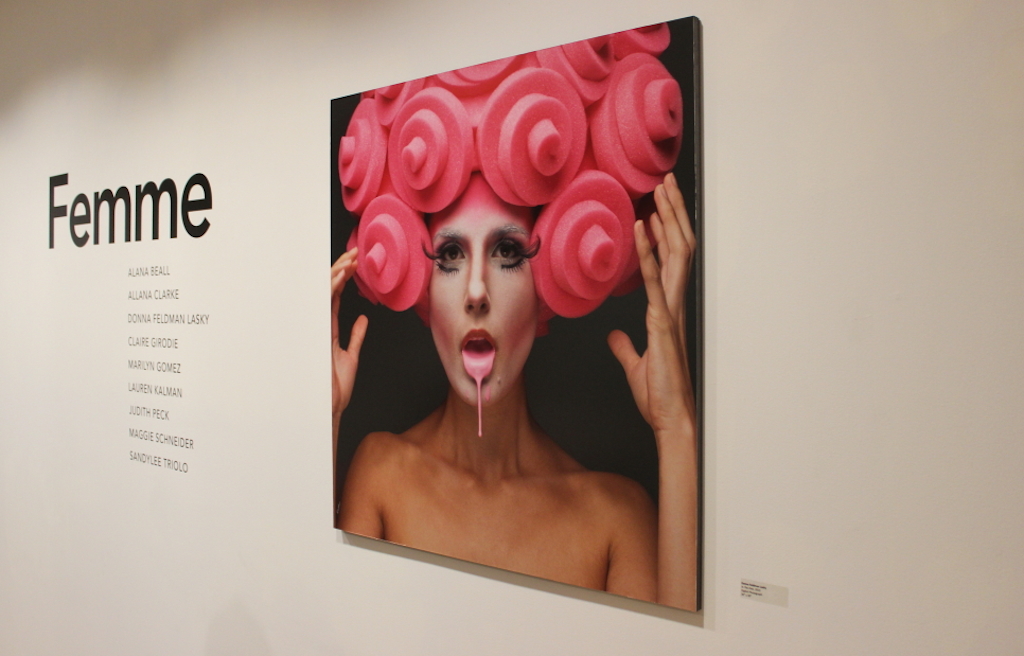 Fashion & Lifestyle
Living With Art: Lat Naylor’s Artfully Restored Bolton Hill Townhouse
Built in the 1870s, the building had been cut into a warren of tiny student apartments, then laid vacant for a few years with a leaky roof. 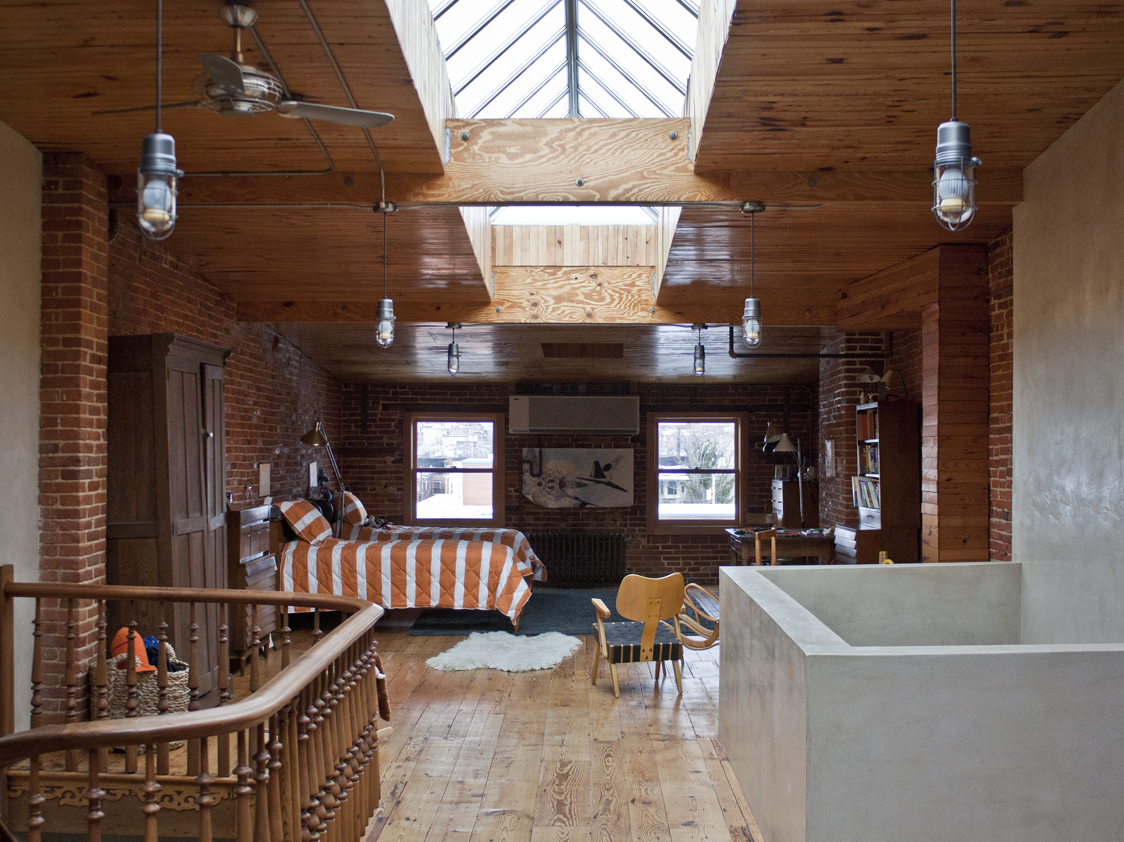 A week after the September 11 terror attacks, Lat Naylor closed on his Bolton Hill townhouse. In February, he moved from San Francisco, struggling with a long-distance divorce, a change of career, and a lack of funds. Built in the 1870s, the building had been cut into a warren of tiny student apartments, then laid vacant for a few years with a leaky roof.

“The place was trashed, but I didn’t have enough knowledge to know how trashed it was,” he told me over coffee at his rough-hewn kitchen table. “I was depressed, I had a 220 pound dog, there was very little electricity, and there was no heat. It changed from somewhere I was going to live to my mid-life crisis sculpture project.”

Traces of the painstaking work that followed over the next six years now mark every surface. All of the interior partitions were demolished, a new roof was put in, and structural steel stabilized fragile end walls and sagging joists. Each of the five floors, 18’ wide by 72’ deep, are bracketed with exposed brick walls. Naylor laboriously stripped the plaster off with a hammer and a wire wheel over eight brutal months.

“It [was] insane. The ceiling was almost worse. I would come in and do two bays, all day.” But the work, slow and meditative, soothed him. “The ideas don’t necessarily start, they sort of coalesce as you’re doing it. It was all about getting back to the basic quality of the building materials. And now we get the afternoon light and it’s just like honey in here. It’s amazing.”

“I gave it up to the boys and it’s the best space in the house,” Naylor says of the expansive fifth floor. Tucked under the slanted mansard roof at the front, and lit with a massive 30-foot skylight down the middle, it was once Naylor’s studio. It still contains dozens of paintings and several sculptures, but the heavy worktable is now covered with a train set.

One floor down, in the adult’s bedroom, an antique bathtub sits in the middle of the room, by the top of the stairs. Even the bathrooms lack doors, an intentional design move in the ruthless pursuit of open space. Despite the lack of acoustic separations, Naylor says, “the house is pretty calm. We’re generally quiet people.”

Naylor is a tall man, his frame topped with a rebellious mass of gray hair. As we talked, his big hands animated the air and the conversation wandered amenably from Donald Judd to the history of row houses to his education as a carpenter.

“I grew up here [in Stevenson, Maryland], went to college at Princeton, got a degree in urban studies, went to work for the Enterprise Foundation and they sent me as an in-kind donation to a community development group in West Oakland.” After three years of organizing for low-income housing, he enrolled in Berkeley for a graduate degree in planning, but dropped out after only two weeks. He packed up and headed to the Fashion Institute in New York.

“Looking back on it, I was just moving towards being a fine artist. I was coming from such a conservative background, it was sort of incremental steps to get there, each less traditional as I went along.” After an apprenticeship in London, he started his own label, Think Tank, in 1988. It lasted exactly ten years.

“I was really naïve. My thing was, ‘Okay, well we’ll just make the best clothes, and people will just buy it.’ And worked that way for about a year and a half.” He caught some lucky breaks, won a few awards, and got his clothes stocked in Saks Fifth Avenue and Bergdorf’s in New York. But Naylor lacked the business acumen to scale effectively.

An ill-fated attempt at manufacturing in India ended in a whole shipping container of mildewed clothes that hadn’t been shrunk properly. “A Japanese medium fit me,” he recalled, laughing. “At that point I lived above a laundromat, and I just took it over for two days, got carpal tunnel from lifting the shit up and putting it in washing machines and drying machines and that was sort of what the whole ten years was like.” In debt, he was forced to lay off his fifty employees and shut down.

In the early nineties, Naylor had studied under a painter, Michael Hosner. “I was so young I didn’t fully understand really what was going on. I would go there twice a week and paint with him and he would get up and get out of bed and deal with me for a few hours and then get exhausted. It was an amazing thing.” At the time, San Francisco was ground zero for the AIDs epidemic, and Hosner was very sick. He was also grieving for his friends, many of whom were felled by the same disease.

“He had a little painting of a horse, and he would paint it out black every time someone died, and whenever he started feeling better again he would start filling the colors back in again. And then he would paint it out black and repaint it.” Hosner passed away in 1993, but his spirit of patient process lived on in Naylor. After Think Tank closed, he started manipulating leftover bolts of fabric with wax, oil, and plaster. Raw hunks of material were then grommeted into “books,” riffing on fabric sample packaging.

Naylor was able to leverage the name recognition from his fashion career into immediate art sales, and, eventually, representation here in town through Jordan Faye Contemporary. His work relies on assemblage of found materials, thoroughly worked with precise, repetitive operations.

Throughout the house, dangling sculptures are composed of ceramic insulators and faceted bits of wood he uncovered during the demolition. What he calls “floor paintings” are collaged hunks of heart pine floorboards, paneled carefully into herringbone slashes of natural wood and painted pieces. Open boxes made of scrap joists suggest the airy outline of crooked bricks, stacked into a Seussian tower on the main floor. Each segment of wall is a carefully composed elevation, anchored by an architectural element and rigorously fitted out with prints, drawings, and paintings. The thirteen-foot ceilings give him plenty of room to operate, and rearranges things often, using the house as a lab to explore his own work.

In 2006, with a year of work still left on the house, Naylor remarried. “We had nothing. [The house] was like a giant sculpture because it was just empty and finished. And different than a normal empty house. We were both really nervous to actually live in it. And we moved all the stuff in one day and it worked.” Though it has accumulated more stuff since those severe early days – including two kids – the house retains a spare, cavernous quality. Despite the city rushing by outside, it seems hushed and contemplative, steadied by a scaffold of sculptures and paintings.

Naylor, though, is restless. He recently bought a second building, and has begun the slow process of converting it into his studio. He has started, as always, with stripping the brick. “I really did promise myself I would never do it again, and I got this place over on North Avenue, and I tried different ways, but none of them just . . .,” he trailed off, laughing, looking into his coffee.