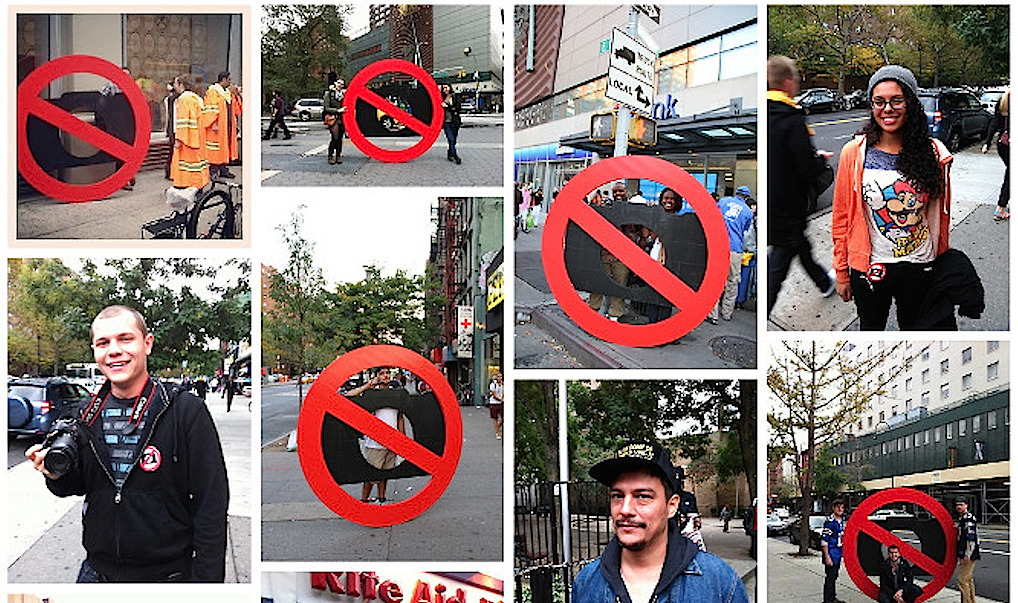 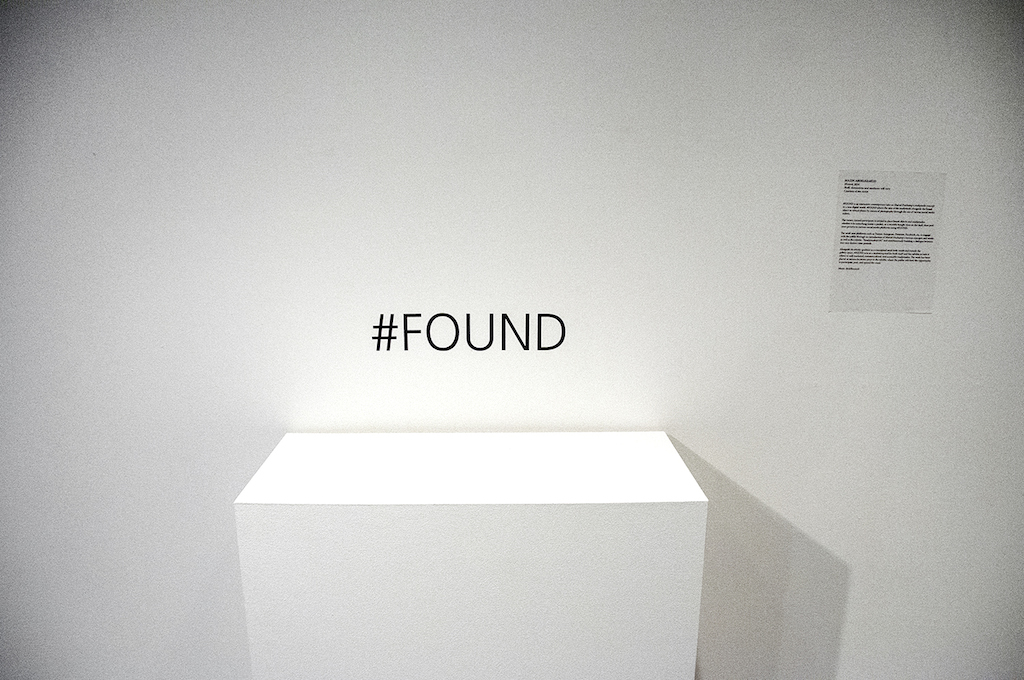 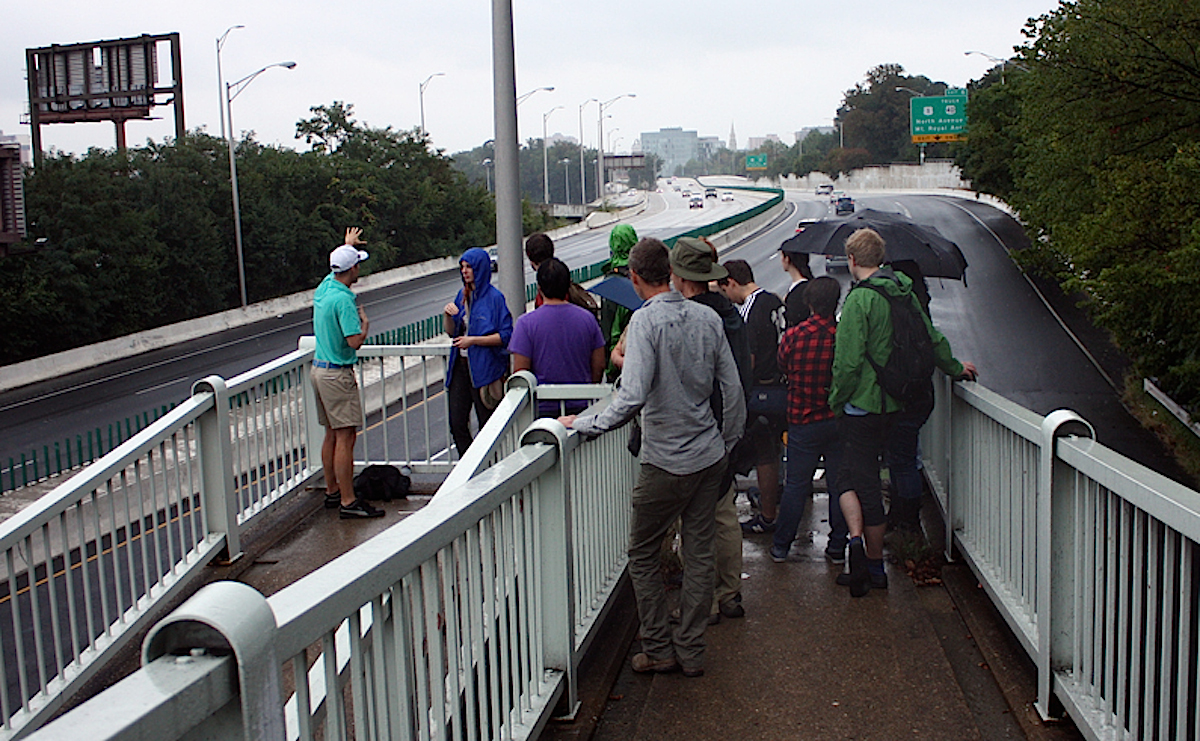 I met Graham Coreil-Allen under a concrete footbridge next to a Freeway Eddy. To our left, cars accelerated onto the ramp to the Jones Falls Expressway. Above, a footbridge sheltered us from an unsteady rainstorm that would follow us all afternoon. To our right, more cars poured off the connector road and headed towards downtown. Beyond a bank of trees, the highway itself roared over the rain, making it hard to hear him speak.

About fifteen of us had assembled for a tour of the knot of highway infrastructure at the southeast corner of Druid Hill Park. No one seemed exactly sure what to expect, and looked around in silent acknowledgement that it was a slightly absurd way to spend a Saturday afternoon. Coreil-Allen was dressed in a blandly official uniform: teal polo shirt, embroidered with his name and embellished with a patch. He presented himself as a sort of freelance park ranger, in the business of classifying, documenting, and touring scraps of public land. Hemmed in by curbs, roofed with concrete, and surrounded by a wall of traffic, our little patch of clover didn’t seem much like anyplace at all. But it had been defined. It was a Place. We were standing amidst the currents of a Freeway Eddy: “an interstitial fragment of space between intersecting curves of highway pavement.” We had stepped through the first frame of Coreil-Allen’s art and into a New Public Site. He has identified 36 site typologies and compiled them into an illustrated field guide. The classifications read like an ontological argument about the meaning of the word site, one name after another rebuking places that are, resolutely, non-sites. By naming them, and inviting us to inhabit them, Coreil-Allen was transforming them from non-places into Public Sites by virtue of occupation, categorization, and documentation.

This strategy – realization by occupation – is not without its flaws. Site, as defined by the dictionary, requires either human use or the tenancy of a structure. As our tour moved on, around to the footbridge above, the Freeway Eddy blinked back into non-existence. Abandoned by its only inhabitants, it did not even have the honor of becoming a ruin; it merely ceased to be. To combat this erasure, or perhaps just nod to it, Coreil-Allen has created other layers of taxonomy that describe moments, objects, and brief brushes with the urban uncanny. Some terms describe fleeting experiences, like walking through the updraft from a subterranean gate. Others describe archetypes and organizational principles, attempting to define a kind of 3-D grammar for our jumbled cities. Coreil-Allen, 32, was born in Texas, grew up in Florida, and then moved to New Orleans for college. He started off studying architecture at Tulane, but ended up transferring to New College of Florida and graduating with a degree in art and sociology. New Public Sites began in Brooklyn in 2007, as series of détournements. “[It’s] this Situationist idea of being able to reveal a latent truth by rearranging stuff. So I’d go out there and find some things and create an installation,” he told me. “I would advertise them through these maps that I distributed at corner stores, bodegas, coffee shops.” His intent was to shift the psychogeography of each site, altering perception of landscape. But, short of sitting at the installations and observing people, Coreil-Allen had no mechanism for collecting feedback on his work.

In 2008, he moved to Baltimore to pursue an MFA at the Mount Royal School of Art at MICA. He continued to draw maps and implement interventions in public space using colored tape and found objects. After a few months, he told me, “It just become so apparent to me that I needed to do walking tours because I wanted to know what people thought about these spaces. I didn’t need the stuff out there when I could simply take you out there and talk about it directly. The tours themselves are my art.” Accordingly, each aspect of the tour has been carefully crafted. The uniform is “used to project expertise and authority.” The tour scripts are heavily researched, with “a little bit of architecture, a little bit of history, a little bit of sociology, and the art stuff, too.” The taxonomy of urban conditions is “architectural poetry that I write or appropriate directly.” Each formal term is memorized, along with a set of talking points, for every ninety-minute tour.

Coreil-Allen’s own definition of his work places it on a continuum with the Situationists, whose concept of derivé, or drift, was an attempt to subvert the totalitarianism embedded in the geometry of the city by wandering on foot. Gordon Matta-Clark had the same idea with Fake Estates. In 1973 he bought 3,500 square feet of property across fifteen sites in New York City at public auction. Matta-Clark dubbed them “anti-property,” leftovers from surveying errors and eminent domain appropriations. The act of buying land became a method for illustrating the absurdity of buying land, achieving the shift in perception the Situationists were after. More recently, the Occupy movement appropriated Situationist tactics, establishing camp in downtown Manhattan for several months. Zuccotti Park, however, was a Kafka-esque space known as a “POPS,” or privately-owned public space. This legally allowed for the eviction of squatters, and the protests ended in batons and arrests. At Harvard, Professor John Stilgoe has been taking a less combative approach to public space. He teaches a perennially popular seminar course involving long strolls that inspired a book, Outside Lies Magic. He writes that the practice of walking “makes explorers realize that all the skills acquired in the probing and poking at ordinary space . . . are cross-training for dealing with the vicissitudes of life.” The book takes a sociological approach, explaining how to read the built environment for histories, patterns, and clues to human behavior. It couches on notions of frontier and the American expansionist impulse, eventually circling back to the idea of rambling for rambling’s sake. Stilgoe takes no political stance, preferring the simple pleasures of close observation. With New Public Sites, Coreil-Allen has found a similarly fluid way to reclaim these fragments of space. “We are all the makers of public space,” he says. “This is all our civic terrain. Just because it’s been designed for one thing does not mean we can’t make it do another.” A recent Ruby grant has allowed Coreil-Allen to film the walks, generating a record of reclamations. The videos, to be released on YouTube, are a way for more audiences to experience space as he sees it. A self-published guidebook, available on his website, allows others to develop their own walks.

The tours, designed to disorient, become an “aesthetic strategy” to make pedestrian participants see the world in a new way. Our walk, entitled Reservoir Chill, lived up to its billing. From the underpass we climbed the footbridge, observed an impact attenuator, overlooked the JFX from a scenic landing, jaywalked extravagantly, traced ghost sidewalks through underbrush, and ascended towards the Moorish Tower in Druid Hill park as if through the ghost gates of the long-demolished southwest entrance. At the top of the hill, Baltimore was laid out like a painting, smudged by the steady rain. Coreil-Allen asked for a few moments of silence, just to we could look at it all. Saturday, September 27, 1pm – Power Plant Alive! -Meet behind the old Power Plant at 601 E Pratt St, on the south side of Market Place and Pratt St.