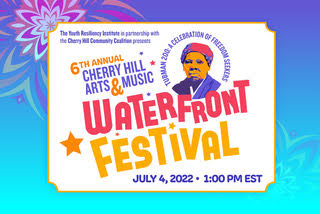 The Independence Day Festival’s Theme is Tubman 200: A Celebration of Freedom Seekers

Collaboration continues to be a hallmark of the festival, and this year it will include a historic Baltimore Cultural Arts Program (CAP) photo exhibition and special activities in partnership with the Billie Holiday Center for Liberation and Inheritance Baltimore Community Archives Project. South Baltimore Gateway Partnership, a lead funder of the Cherry Hill Arts & Music Waterfront Festival, recognizes and supports the festival and its importance.

Seated along the Patapsco River, Cherry Hill enjoys access to water via Middle Branch Park, which is a perfect location for the Waterfront Festival and this year’s theme, which celebrates the bicentennial and undying legacy of freedom seeker Harriet Tubman who was born in Maryland, with special events leading up to the festival, as well as an array of special activities during the festival, including historical re-enactments, exhibits, an elders’ fashion show, the presentation of Harriet Tubman: 200 Festival Honorees and much more.

The Cherry Hill Arts & Music Waterfront Festival is a Black led and founded festival, that was launched six years ago to connect and collaborate with Cherry Hill residents as they imagine and realize arts and culture in their historic community.

“The Cherry Hill Arts & Music Waterfront Festival has quickly become one of the East Coast’s premiere waterfront festivals,” said Fanon Hill. “In July 2019, we hosted more than 5,000 attendees. Accessibility and community participation are cornerstones of the festival. It offers entry points for artists living in Cherry Hill to share their passions and crafts,” Hill added.

Cherry Hill has experienced a plethora of social and economic challenges. Despite this, the multi-generational community has not only maintained its resiliency, but also demonstrated its ability to thrive, even in the face of the pandemic. This year’s festival will also honor veterans from Cherry Hill during a special ceremony during the festival.

“As an organization that has a key focus on community transformation and revitalization in South Baltimore, we are proud to have a continuing partnership with the Youth Resiliency Institute in their mission to support children and families in the Cherry Hill community,” said South Baltimore Gateway Partnership Executive Director Brad Rogers. “The Cherry Hill Arts & Music Waterfront Festival is an extension of their mission.”

The history of the development of public housing on the Middle Branch is one of the most striking examples of deliberate residential racial segregation in any city. Cherry Hill was an isolated peninsula adjacent to a city landfill and incinerator and later developed as community for GI’s returning from WWII and Korea. This location was selected after several other options were opposed by whites who did not want African Americans moving too close to their neighborhoods. Recognizing that the plight of Black artists from high poverty communities often becomes stuck in narratives focused on stereotypes and negative statistics, the Youth Resiliency Institute has developed tactics rooted in counter-narrative that emphasizes the need for systemic policy changes that support investment in structural changes rooted in achieving racial equity and changing perceptions of Black artists from high- poverty communities.

“Cherry Hill Arts and Music Waterfront Festival organizers intentionally include community elders and the youth in every aspect of planning, and I am encouraged as I watch the positive interaction of the people, as performers, young and old demonstrate their craft,” said Peggy Jackson-Jobe, Cherry Hill Community Coalition Board Chair.