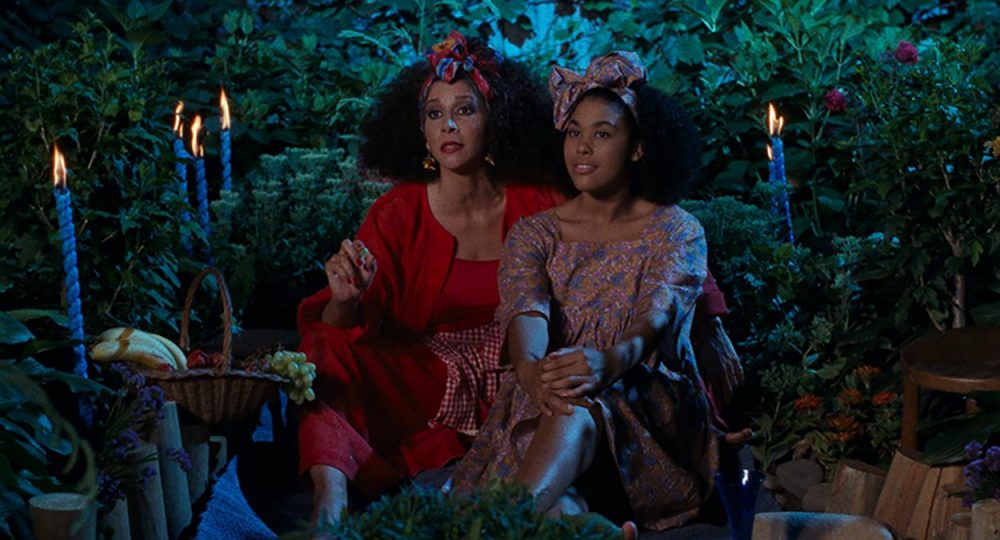 An essential film in the 1990s cinema canon, Alma’s Rainbow was written, directed, and produced by award-winning, internationally acclaimed film and video artist Ayoka Chenzira, one of the first African Americans to teach film production in higher education and among the first African American woman animators. A protege of director Kathleen Collins, whose 1982 film Losing Ground was shot by Alma’s Rainbow cinematographer Ronald Gray, Chenzira continues to teach and works prolifically as a director of television, including episodes of Ava DuVernay’s Queen Sugar, Greenleaf, and this summer’s A League of Their Own. She is currently in production on the adaptation of Octavia Butler’s Kindred.
A coming-of-age comedy-drama about three African-American women living in Brooklyn, Alma’s Rainbow explores the life of teenager Rainbow Gold (Victoria Gabrielle Platt) as she enters womanhood and navigates standards of beauty, self-image, and the rights women have over their bodies. Rainbow attends a strict parochial school, studies dance, and lives with her strait-laced mother Alma (Kim Weston-Moran), who runs a hair salon in the parlor of their home and disapproves of her daughter’s newfound interest in boys. When Alma’s free-spirited sister Ruby (Mizan Kirby) returns from Paris after a ten-year absence, the sisters clash over what constitutes the “proper” direction for Rainbow’s life. Alma’s Rainbow highlights a multi-layered women’s world where the characters live, love, and wrestle with what it means to exert and exercise their agency.
Screenings of Alma’s Rainbow will be preceded by a short animation also created by Ayoka Chenzira and recently restored.
Hair Piece: A Film for Nappyheaded People (1984, 10 min,)In this satirical short, Chenzira utilizes mixed media and animation to unpack the stereotypes associated with Black hair while critiquing the limits of the European beauty standard. She draws attention to the physical pain Black women endure to straighten their hair, and the emotional pain that comes as a result of the pressure to conform.
Restoration by the Academy Film Archive, The Film Foundation, and Milestone Films. Restoration supervised by Mark Toscano. Funding provided by the Hobson/Lucas Family Foundation. Labs: Roundabout Entertainment and Audio Mechanics. With thanks to Vincent Pirozzi.