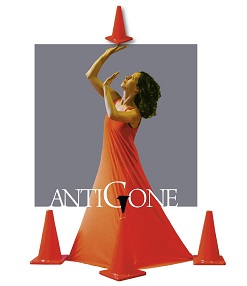 AntiCone, inspired by Sophocles’ Antigone, is the largely wordless story of animmigrant who is put to work building a wall against her country of origin (and,therefore, her brothers), under the dangerous eye of new leader, Creon, and againstthe pull of her ancient namesake.

Scored by the evocative and visceral original music of Alexander Nikitin, the playcombines physical theatre, clowning, and audience interaction, with unique, powerfuldances choreographed and performed by Moscow-trained Natasha Mirny as Antigone.Tia Shearer, who has been called one of DC’s “most versatile actors” (BroadwayWorld)and a “straight up chameleon” (DC Theatre Scene), plays the five characterssurrounding Antigone, including Creon, her brother, and the Chorus. The team isrounded out by 25 bright orange traffic cones.