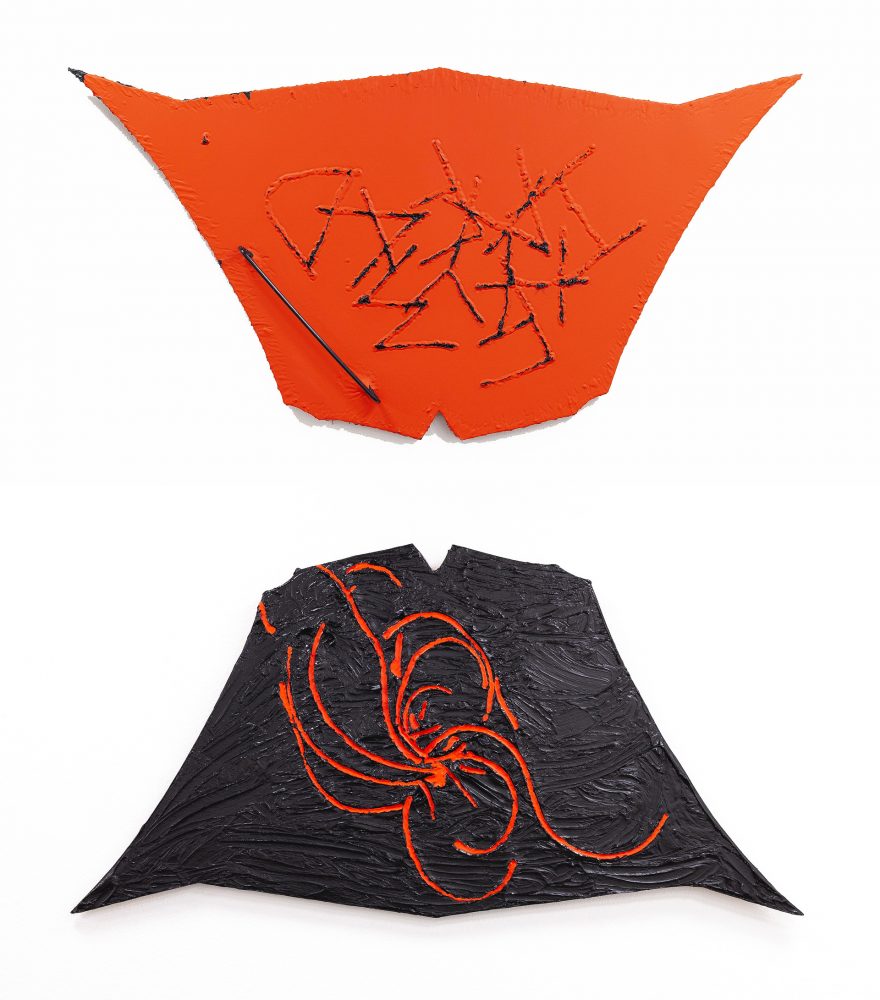 von ammon co is pleased to announce its next project, I.A.H.Y.F.F.A.W.D. / N.F.D.B.J.W.B.D., a solo show by Dallas-based multidisciplinary artist David-Jeremiah. The show will consist of over thirty mixed media works on plywood installed in vertical pairs and predominantly on the gallery’s fourteen exposed structural columns.
On view is a series of paintings on panel whose common content is derived from one of two acronyms, I.A.H.Y.F.F.A.W.D. or N.F.D.B.J.W.B.D. These acronyms, according to the artist, stand in the place of “the most toxic, hateful, and racist sentence [he] could get off [his] chest at the time towards white people”, and neither will ever be decrypted by the artist. The artist is concerned in this series with the rarely-discussed topic of black racism: if racism is a construct undergirded by white supremacy, can those outside of this group participate? By encoding this hateful remark as an acronym, the message adopts its own authority over the recipient, who is unable to read the words but still vulnerable to the acronym’s inherent pathos. The viewer thus spontaneously engages in a dark guessing game wherein assumption overrides proof. A portion of the works on view contain a second acronym, N.F.D.B.J.W.B.D. whose decrypted meaning and sentiment are identical but spoken in Dallas slang and thus consisting of a completely different set of letters.
The shape of each painting shares a common referent: the hood of a particular model of Lamborghini automobile. This reference emerges in several bodies of the artist’s work as a potent conceptual signifier: each of Lamborghini’s contemporary models is named after a particularly dangerous line of fighting bulls, and especially those known to have killed matadors in the bullfighting ring. The fighting bull, which is commonly associated with virility and masculine beauty, is goaded into violent reactions and summarily executed in public as part of a macabre European ritual. The namesake bulls of Lamborghini are the most formidable opponents in the sport’s history: while some did in fact kill their matador opponents, others gained notoriety simply by surviving long enough to earn their freedom.

David-Jeremiah (b. 1985, Oak Cliff, TX) is a conceptual multidisciplinary artist based in Dallas TX. He is a recipient of the 2020 Nasher Sculpture Center Artist Grant Award. A concurrent exhibition, titled G’ordiavonte Fold, will be on view at anonymous gallery in New York City until 04 April. Recent solo exhibitions include PLAY at Halsey McKay Gallery (East Hampton) and Offerings at Janette Kennedy Gallery (Dallas). This is David-Jeremiah’s first exhibition in Washington DC.

von ammon co is a contemporary art gallery based in Georgetown, Washington DC and founded in 2019. One of the only privately-run contemporary art spaces in the US capitol, the gallery’s agenda is to exhibit important exhibitions on a project basis by international artists. I.A.H.Y.F.F.A.W.D. / N.F.D.B.J.W.B.D. is the tenth project in its current location. The gallery is open Friday through Sunday, 12pm to 6pm and by appointment. Please email info@vonammon.co for additional information.