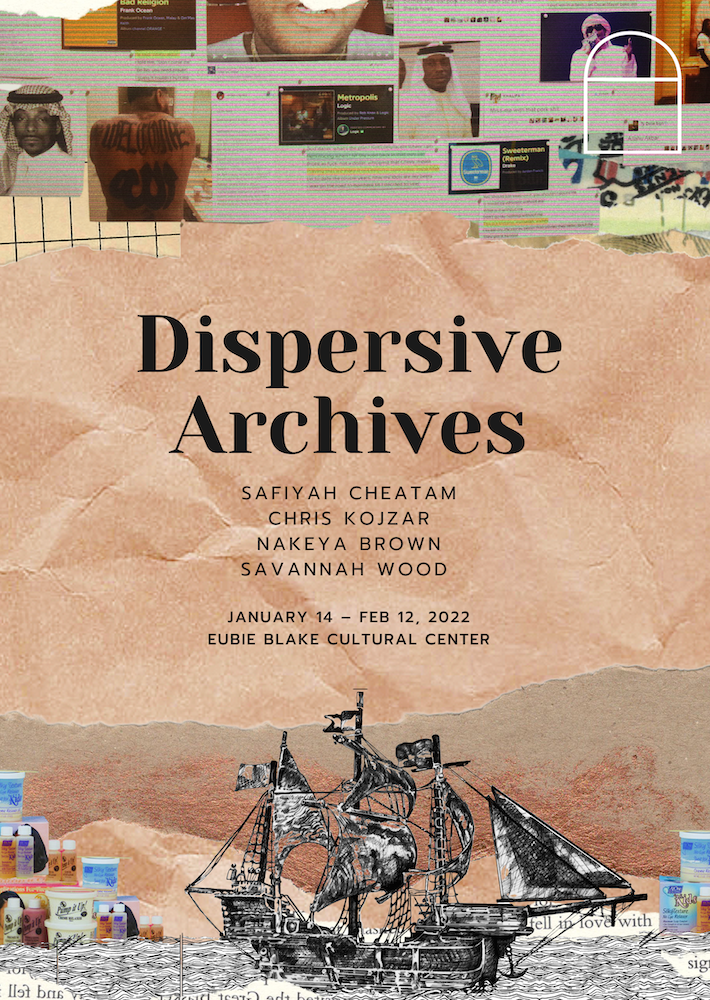 Dispersive Archives Volume 2 builds on the thesis of Dispersive Archives Vol.1: creating your own archive. The artists work with the archive to tell their histories and stories about real and theorized experiences. Themes include enslaved liberation, the beauty industry, family, and popular culture. The exhibition conveys the expansive nature of archives and how it relates to multiple cultures within the Black Diaspora and the United States.

Nakeya Brown uses archival materials of an extraordinary kind and formats them into tableaus in front of the camera. Her work confronts the history of hair care, beauty, and social mores through Black History. Safiyah Cheatham presents a contemporary archive that explores Muslim cultures through the digital and visual culture of music videos and social media. Using AR Cheatham changes the way the archive is shown, the audience interacts with the work in a unique way.

Chris Kojzar presents Black History on a large scale by focusing on John McDonogh and the enslaved persons at his Louisiana plantation. Kojzar’s work reinforces how difficult it is to interact and confront your personal histories. Savannah Wood’s work uses her familial archive and presents an active, or working, project. Wood’s presentation honors her history as well as her material sources.

Thank you to the gracious support of the Eubie Blake Cultural Center for housing this exhibition. There will be a digital artist talk presented towards the end of the exhibition’s run. Education and school-based tours are available by appointment only. Support for the Waller Gallery is in part by the Waller Gallery Patreon page, volunteers, patrons, and supporters.

About the Artists
Nakeya Brown was born in Santa Maria, California in 1988. She received her Bachelor of Art from Rutgers University and her Master of Fine Arts from The George Washington University. Her work has been featured nationally in recent solo exhibitions at the Catherine Eldman Gallery (Chicago, IL, 2017), the Urban Institute for Contemporary Art (Grand Rapids, MI, 2017), the Hamiltonian Gallery (Washington, DC, 2017) and The McKenna Museum of African American Art (New Orleans, LA, 2012); and in group exhibitions at the Eubie Blake Cultural Center (Baltimore, MD, 2018) the Prince George’s African American Museum & Cultural Center (North Brentwood, MD, 2017), and the Woman Made Gallery (Chicago, IL 2016 & 2013), among several others. She has presented her work internationally at the Museum der bildenden Künste (Leipzig, Germany, 2018) and NOW Gallery (London, U.K., 2017).

Brown’s work has been featured in Time, New York magazine, Dazed & Confused, The Fader, The New Yorker, and Vice. Her work has been included in photography books MFON: Women Photographers of the African Diaspora, Babe, and Girl on Girl: Art and Photography in the Age of the Female Gaze.

Safiyah Cheatam is a Baltimore-based social practice artist, researcher, digital storyteller, arts educator and administrator. She focuses on material culture and social phenomena involving Black Muslims in the United States, and the role of Afrofuturism in Black folks’ daily lives through which she explores the nuances of duality existing within Black and Muslim people. For her work as a co-producer of her awards-nominated podcast OBSIDIAN, she is the recipient of a Red Bull Arts Microgrant and Rubys Artist Grant by the Robert W. Deutsch Foundation. Safiyah is currently the VisArts Bresler resident artist and has notably collaborated with the Baltimore Museum of Art, Walters Art Museum, Morgan State University’s Center for the Study of Religion in the City, Black Islam Syllabus, Rap Research Lab. She has been featured in The Washington Post, NBC News, BmoreArt, and has exhibited artworks nationally.

Christopher Kojzar received his BA from George Washington University and his MFA from the University of Maryland – Baltimore County. He is currently an Andrew Harris Fellow at the University of Vermont. For the upcoming year, he is collaborating on the ‘McDonogh Memorial to Those Enslaved and Freed’ to install a public monument that celebrates and traces the origins of the men, women, and children who labored as slaves on the plantations of John McDonogh. In June of 2020, John McDonogh’s statue was toppled in New Orleans, Louisiana.

Savannah Wood is an artist and cultural organizer with deep roots in Baltimore and Los Angeles. Wood works primarily in photography, text and installation to explore spirituality, domesticity, and identity-formation, often in relation to place. She combines new and old works with found objects and archival documents to create unique, accumulative installations that privilege non-linear notions of time

Major themes in her work include ancestral research, reframing land as a readable archive of historical activity, and reimagining humans as part of, rather than separate from, the natural world. Her projects reconnect people with the everyday beauty of our world and the histories that lie hidden just below its surface. She approaches this work with curiosity and reverence. As the Executive Director of Afro Charities, Wood is creating programming and infrastructure to increase access to the 129-year-old Afro-American Newspapers’ extensive archives.