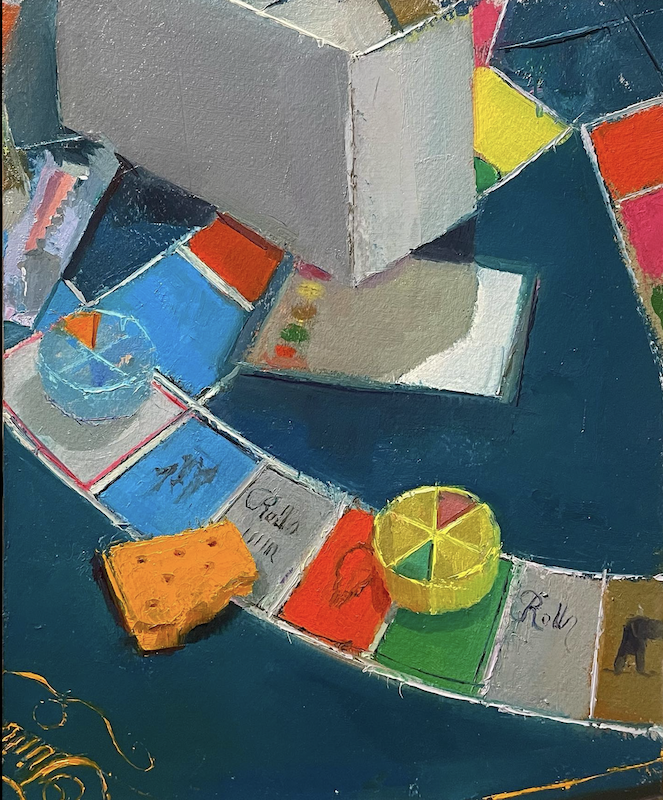 For Exeter’s first exhibit of 2023, gallery artist Erin Raedeke will join two others: Neil Callander and Nicole McCormick Santiago. This show is an exploration of generations. Raedeke’s work has often harkened back to wrought childhood memories but this time, we see a lighter side. Her still lifes, intimate in scale, feature favorite GenX easy prep meals and to-go style snacks that proliferated in the 80’s. Other items from that era cameo including Lite Brites, Trivial Pursuit, and stickers from the “Just Say No” campaign, which cost our country 1 billion, increased incarcerations exponentially, and all with little proven result. These still lives as time markers would take on a strictly nostalgic air if it weren’t for the directness under which these objects are portrayed under Raedeke’s uncompromising eye and deft hand.

Callander’s work includes aspects of GenX as well. The dartboard and basement scenes with stacks of VHS tapes harken to a specific time and place in the American consciousness. However, his imagined future portraits of his son, take on a very different tone. Instead of a nostalgia for what was, these later works seem to capture both pride in his son’s imagined come-uppance and a lingering sense of loss. In this imagining is the artist commenting on his own middle and impending later-life stages?

Santiago’s work takes on a collision of generations. Her work seems to comingle ideas of a child in a parent’s workshop, searching for clues that may reveal more emotional connection with a somewhat distant adult. There are contemporary elements in some of these works too, Starbuck’s cups and empty overturned medicine bottles, which speak to other family dynamics, those of sleep deprived middle-aged kids looking after their own children and their aging parents.

Ultimately all three artists are consummate color masters. Callander’s “Summer of 2020, Behind Finn’s Head” and “Finn’s Head Gradation 2,” reveal exquisite color sensitivity and nod toward the care of an attentive father trying to hold moments as they pass. Santiago creates color spaces that deal with delicate registers of lightness or darkness. In “Caregiver” we see a dichotomy between the implements of modern medicine, warmly illuminated under the lamp, sandwiched between a cool dark background and coolly lit dim foreground. Raedeke’s work never ceases to surprise upon close inspection. She regularly splices effervescent color in among her neutrals as in “1980’s School Lunch.”

The art in Generations explores youthful memories, present hardships and enjoyments, parenthood, and a look toward the future with soberness and sincerity. Please join us on the evening of Saturday, February 4th, for a reception with the artists.