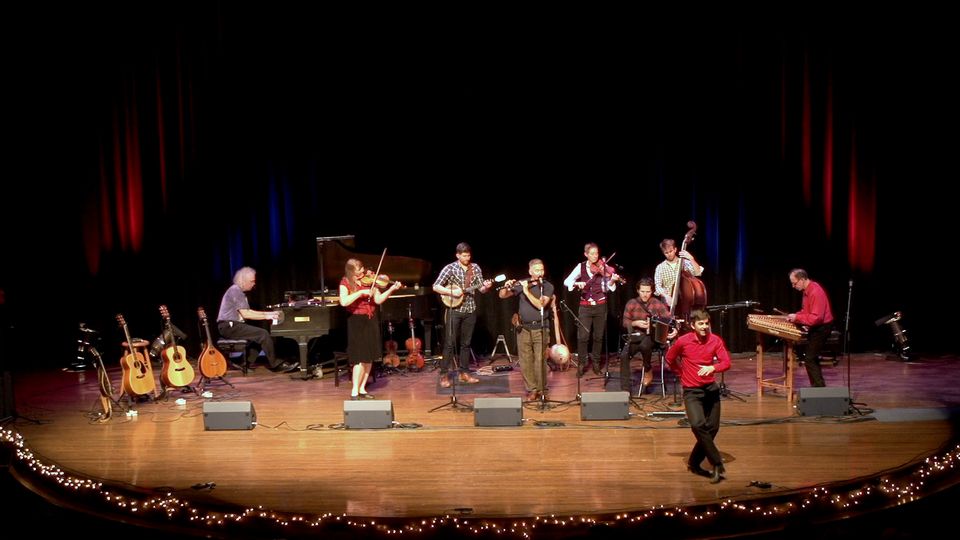 TWO SHOWS
3:30pm AND 7:30pm
The 37th Annual Winter Solstice Reunion Concert reunites three world class musicians Ken Kolodner (hammered dulcimer, fiddle), Robin Bullock (piano, guitar, cittern, mandolin) and Chris Norman (wooden flutes, tin whistle, small pipes, piano) of Helicon for their annual holiday celebration. On December 17, 2022, Helicon will perform two shows, at 3:30 and at 7:30, bringing to life seasonal Scottish, Irish, French Canadian, Appalachian, Bluegrass and other world music. This year’s venue is the intimate setting of Kraushaar Auditorium on the campus of Goucher College, 1021 Dulaney Valley Rd, Towson MD 21204.
NEW HELICON CD COMING NOVEMBER, 2022!!​
Joining Helicon once again will be the astounding North American Step-dance Champion Jonathon Srour (who grew up attending the concerts) and two additional bands: The Ken & Brad Kolodner Quartet and members of Charm City Junction! Ken has performed with his son Brad for the last seven years along with bandmates Alex Lacquement and Rachel Eddy as a quartet, releasing their 4th CD together, Stony Run (March, 2020). Members of Charm City Junction feature Ken’s son, Brad Kolodner, Sean McComiskey and Alex Lacquement. We are pleased to bring back Elke Baker. Baker & Kolodner collaborated in 2021 to record On A Cold Winter’s Day with guests Robin Bullock and Alex Lacquement.
Helicon toured widely throughout North American and Europe for many years. The members ceased touring in 1998 to pursue solo careers. They are internationally recognized as among the finest practitioners of their respective instruments, recording over 50 recordings. Together, the members of Helicon continue to work their magic year after year. The trio has Baltimore roots: Kolodner was born here and still resides in Baltimore, Norman lived in Baltimore since age 11 and now has returned to his native Nova Scotia; and Bullock now lives in NC but was originally from the DC area.
Helicon started life combining the backgrounds of three related but distinctively different traditions of music (Bluegrass, Irish and old-time). Helicon eventually became part of the world music scene but continued to perform those three genres in a very progressive style. The band never sought out to be musical preservationists but rather experiment with expanding the ever-evolving traditions. The members of Charm City Junction are also among the finest performers of Bluegrass, Irish and old-time styles and feature Irish button accordionist Sean McComiskey, everyone’s favorite bassist Alex Lacquement and Brad Kolodner. While their sound is vastly different from Helicon, it is only fitting to have them as Helicon’s guests.
Rounding out the show is The Ken and Brad Kolodner Quartet which presents old-time music in a completely new way. Brad Kolodner has established himself as one of the finest banjo players in the U.S. and a force in the traditional music scene as a musician (performing with Charm City Junction and The Ken and Brad Kolodner Quartet), radio DJ and concert/festival promoter, winning the prestigious IBMA Momentum Award in 2016. Joining yet again is the amazingly versatile Rachel Eddy (The Early Mays, The Ken and Brad Kolodner Quartet). A West Virginia native, Eddy grew up learning old-time music and is one of the best purveyors of the style performing on fiddle, guitar, banjo and vocals. Rachel performs regularly with Ken and Brad and Alex and recorded on their last two CDs including the 2020 release Stony Run.
And wait for it!! You never know when the man in the red pants (Jonathon Srour) will leap across the stage!!
Learn More
Share
Add to Calendar 20221217 America/New_York Helicon&#8217;s 37th Annual Winter Solstice Concerts