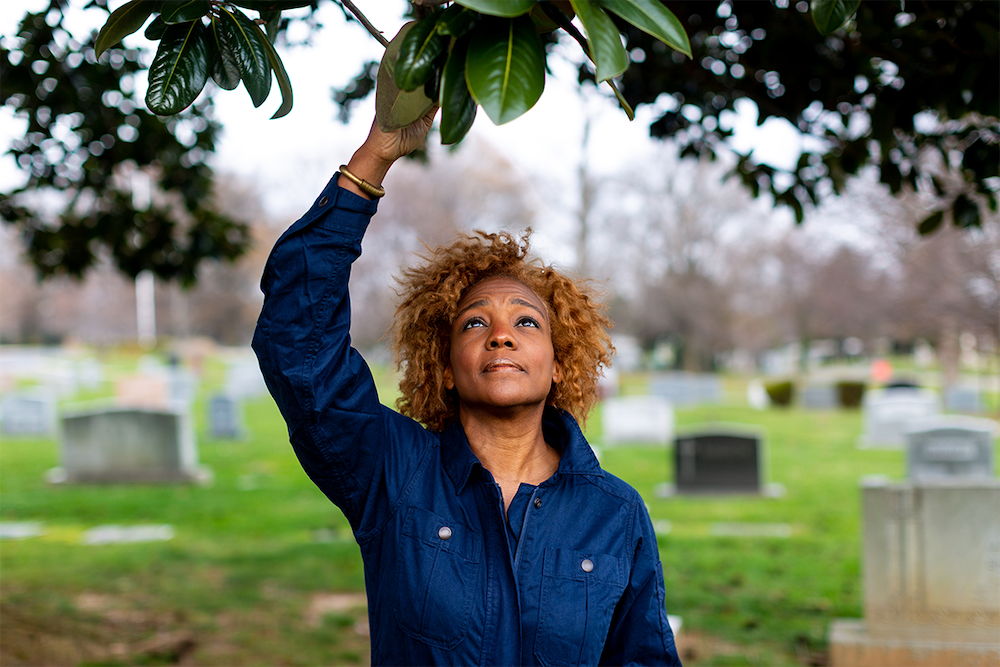 Cody Gallery is pleased to announce Magnolia, a solo exhibition by Nekisha Durrett, opening on Thursday, January 21, 2021. A virtual discussion with the artist will be held at 6:00pm on January 21, led by artist and independent curator Endia Beal in collaboration with Marymount’s office of Diversity, Equity & Inclusion. Further details to be announced in January. Additional programming will be announced during the course of the exhibition. The exhibition will remain on view through March 19, 2021.

Washington, DC-based artist Nekisha Durrett seeks to hold space for Black women to not only be seen, but celebrated as worthy of justice, gender parity, and inclusion in the narratives they so profoundly inform. Durrett’s work often materializes on a monumental scale through public art and installations addressing marginalized communities and their histories. In this exhibition, the artist presents a more intimate experience, calling viewers to engage with the stories and lives of 30 women murdered by law enforcement, using the Magnolia leaf as metaphor. Black women experience the highest rates of homicide of any racial group in the United States. Coupled with this staggering statistic is the fact that American society has long ignored the health and longevity of Black women, all the while mining their ingenuity, creativity and intelligence. In perhaps no other year has this exploitation been more evident than 2020. The widespread protests in the aftermath of the murders of George Floyd and Breonna Taylor brought the issues of systemic racism and inequities in the justice system to the fore in ways not seen since the beating of Rodney King in 1991. But it was the ruling on Breonna Taylor’s murder—the lead police officer was indicted only for Wanton Endangerment, which charges him for endangering the lives of everyone but Ms. Taylor—that widened the gulf between the justice system and Black women.

During this year of social revolution, Durrett has succeeded in creating her signature larger-than-life tributes, the most visible of which were monuments to front-line healthcare workers on jumbo screens in New York City’s Times Square. She understands well that the energy expended to create these monumental works requires restorative moments in equal measure and so she turned to nature by means of meditative walks in a nearby cemetery to center herself and search for peace. It was during these walks that she developed the concepts for Magnolia, which she describes below:

During the spring and summer of 2020, I collected fallen leaves from a towering magnolia tree in Rock Creek Church Cemetery in my Washington, DC, neighborhood. Experiencing the impacts of two pandemics at once—COVID-19 and continued police brutality against Black bodies—I used the cemetery as a space for processing my anxiety and grief. Inspired by the #sayhername movement, I began to perforate the names of dozens of Black women murdered by law enforcement into the surfaces of the leaves. This work centers the experiences and activism of Black women throughout … the women’s movement, a movement that has historically excluded women of color. This erasure from mainstream discourse is as relevant today as it was 100 years ago, especially for those positioned at the intersection of race and gender.

Golden brown and tough as leather on one side, velvety soft on the other, fallen magnolia leaves possess an often uncelebrated radiance and resilience. For many, the magnolia flower is the showstopper. However, it is the magnolia leaf that long after its death withstands rain, wind, and the lawn mower—bedeviling gardeners who find them a hassle to compost or discard. Even after death, the leaf refuses to be erased and forgotten.

It is this elegant longevity that resonates throughout the exhibition. Each leaf inscribed with the name of a woman whose life ended violently floats quietly within an exquisitely constructed diamond-shaped light box, glowing from within. Ultimately, Durrett’s Magnolia serves as a contemplative chapel for viewers to consider what might have been possible for the women she names had their lives not been casually and violently discarded by a system in need of revolution.

In addition to the works on view, Durrett created 4 special edition prints that are available for purchase in the gallery. A portion of the proceeds from each sale will be donated to The African American Policy Forum, founders of the #sayhername campaign which brings awareness to the often invisible names and stories of Black women and girls who have been victimized by racist police violence, and provides support to their families.

Nekisha Durrett (American, b. 1976) currently lives and works in Washington, DC, where she creates bold and playful large scale installations and public art that aim to make the ordinary enchanting and awe inspiring while summoning subject matter that is often hidden from plain sight. She earned her BFA at The Cooper Union in New York City and MFA from The University of Michigan School of Art and Design as a Horace H. Rackham Fellow. Durrett has exhibited her work throughout the Washington, DC, area at  the US Botanic Garden, West End Library, Martin Luther King, Jr. Memorial Library, Flashpoint and Hillyer Art Galleries, and Arlington Arts Center. Nationally, she has exhibited at Arizona State University Art Museum, Tempe, AZ; Diaspora Vibe Gallery, Miami, FL; Rush and Corridor Galleries, New York. Durrett has been named one of 40 Under 40 Washingtonians to Watch by Washingtonian Magazine, received multiple project grants from the DC Commission on the Arts and Humanities, and was an Artist-in-Residence at the Vermont Studio Center in Johnson, VT. Durrett was a finalist in the National Portrait Gallery’s prestigious Outwin Boochever Portrait Competition and was featured in “The Outwin 2019: American Portraiture Today” exhibition. Her most recent installation titled Up ‘til Now, a freestanding, solar powered sculpture that evokes the history of Washington’s landscape and architecture, can be found in the city’s Dupont Circle neighborhood. She recently completed a permanent installation on the glass-walled vestibule in the newly renovated Martin Luther King, Jr. Library in Washington and is currently in production on a wall mounted public sculpture in the Liberty City community of Miami, Florida, in collaboration with conceptual artist Hank Willis Thomas.