Of Flowers and Flesh 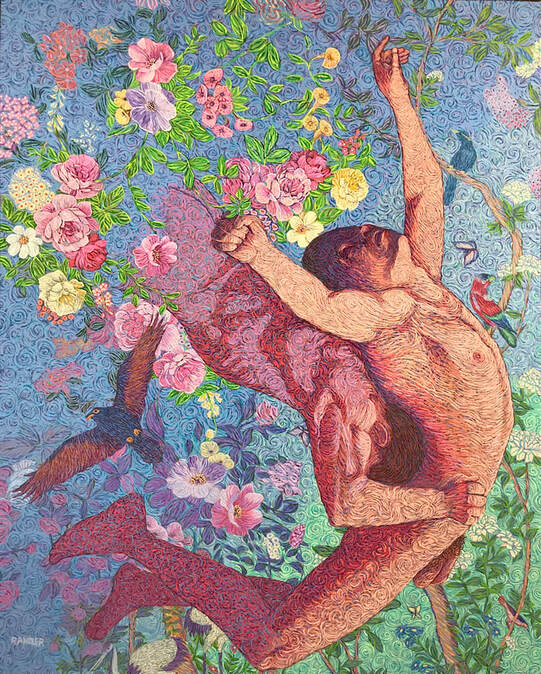 This Opening Reception will be an In-Person event. Those that attend must wear a mask at all times while in the gallery. We will be offering wine for guests to enjoy outdoors in front of the gallery.

Ted Randler (b. 1959, Stamford, Connecticut) earned his Bachelor of Fine Arts from Virginia Commonwealth University in 1982 and Masters of Fine Art from Syracuse University in 1985. After graduate school, he lived in New York City for a number years before relocating to Virginia.
Highly influenced by popular culture and mass media — particularly for magazines and television — his early artwork predates the age of the internet. He currently splits his studio time between D.C. and Ashland, Virginia.

His paintings have been presented in solo and group shows in the Hamptons, Manhattan, Richmond, and Orlando galleries. His works are included in the Capital One Corporate collection, the Florence Griswold Museum as well as in private collections throughout America.

“I wanted to teach myself how to paint flowers. I’m not a gardener. My husband and I bought a home where the owners had planted elaborate flower beds on the property. Many of the flowers in these paintings come from my yard or from corporate-maintained gardens found throughout Washington, D.C.’s public venues.

A little universe of chaos and control, a garden’s beauty comes from our attempts to organize patterns from the randomness of nature. It is an impossible endeavor as natural growth will eventually overwhelm all gardens.
The other kinds of flowers in my paintings come from wallpaper patterns. Again, I’m playing with the idea of how we try to impose order upon nature.

As with everything I attempt in art, I always begin with the idea of achieving Pre-Raphaelite exactitude in detail, but then the process of painting or drawing takes precedence. The composition of texture, color, and shape on my easel becomes so much more interesting than merely rendering the image.

Instead of detailing flowers, figures, and patterns, I tend to indicate more than illustrate. I think in terms of reasonable facsimiles of what I want to paint balanced against the discoveries from experimenting with calligraphic mark-making and optical blending of color.”