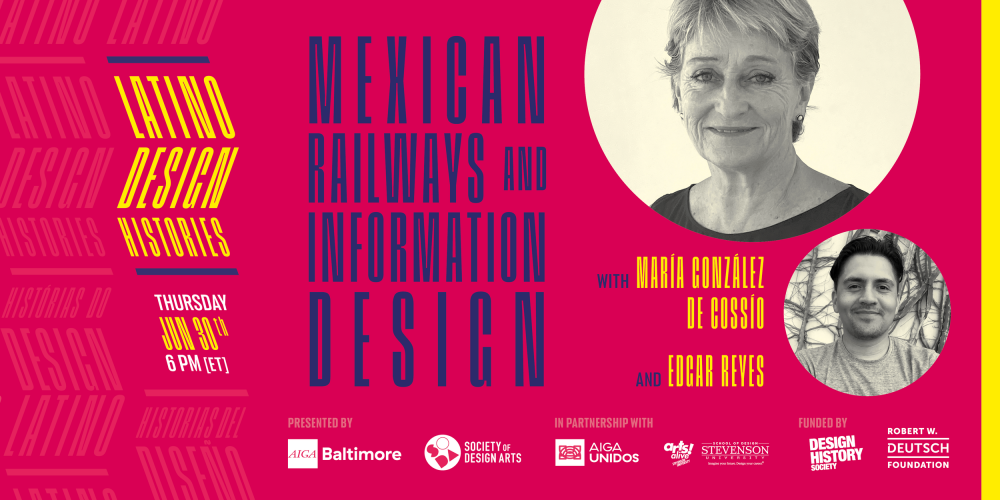 We are back with the Latino Design Histories series! Join us for our 2022 season with the Society of Design Arts (SoDA) and AIGA Baltimore. Our next online talk will be presented by the information design researcher María González de Cossío from Mexico.

The development of railways in Mexico became a landmark of modern life, as in several other countries in the 19th century. Interesting information design objects were created for the construction and development of the railway system back then, such as maps and charts. However, the knowledge related to such objects has remained in the realm of cartographers and other specialists. The study reported in this presentation shows that information design can help us understand the history and be acquainted with questions, such as: why it took so much time to build one railway line, what problems were faced, what comparisons can be made, and what were the consequences of the advent of the railway.

AIGA Baltimore and SoDA member Raquel Castedo will moderate this event, and Baltimore-based visual artist Edgar Reyes will join us for the Q&A session.

Thank you to AIGA Unidos and Stevenson University for partnering with us and to the Robert W. Deutsch Foundation and the Design History Society for funding the series.

👉🏼 The program will be presented in Spanish. Interpretation in English and Portuguese will be available.