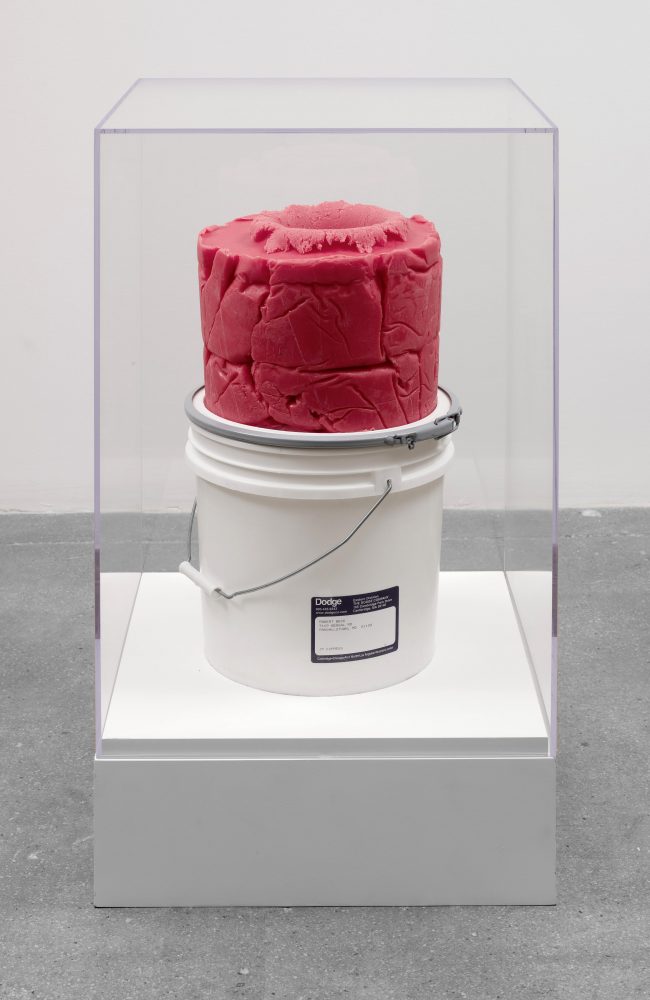 walk-through with the artist

Arranged in the main arcades of the gallery are six (or seven) gunshots at close range, captured within cylinders of wound filler modeling compound. Wound filler, a sort of shorthand for human flesh, is a material used in the reconstruction phase of human embalming. The material is manufactured by the Dodge Chemical Company, the world’s largest supplier of embalming chemicals, tools, instruments, urns, and the many other products used in the funeral industry—also, as a grim suggestion of vertical integration, one of the prime distributors of crime scene forensic supplies worldwide. Between the years of 2004 and 2005, Robert Beck (as he was then named) purchased a range of tints of the product (crimsons, pinks, buffs and tans—the morbid spectrum provided by the human cadaver) and fired a Winchester Super-X 12 gauge rifled hollow-point slug from a Daly brand Over/Under shotgun into the top of the round bucket’s contents of wound filler at point-blank range. The moment of the slug’s entry into the material is captured somewhat flawlessly on the top surface of the wax cylinder, forming a corona that evokes not only a ballistic impact but something as gentle as a raindrop landing on water. Each frozen wound sits upon its container, a polyvinyl carbonate bucket, sometimes sporting the Dodge Chemical Company’s product identification label.

Made over fifteen years ago, the Wound Filler works possess a constantly renewing elegiac nature, reflecting each new mass shooting upon their inert surfaces. The material language of embalming wax represents an unsullied, innocent human body—that which is meant to fill voids in destroyed flesh, a method of mortal redress. Each work captures the extent—and limits—of a 12 gauge slug’s destructive path through a perfect body, by committing the act upon the flawless inverse of the human form. Each wound filler sits upon its container, the Dodge Chemical bucket, which reinforces its presence as a fully balanced, unified body without organs. As a specimen of history, each work sits within a sealed vitrine, and thus makes no contact with its environment. Wound Filler is, at first, an encounter with the ubiquitous but alien (to many) despair of an innocent life extinguished by a firearm; it is, subsequently, a meditation on the force and direction of America’s most loathed and celebrated implement of death and injury.

In the rear alcove of the gallery, a candle made of wound filler sits alone. Casted as a positive of the void left from one of Beck’s close range shots, it could represent the incubus who haunts the sleeping body in the nation’s nightmare of violence; it could also beckon to be lighted, so as to grant a wish for the dream’s end.

Robert Beck was born in 1958 in Baltimore and moved to New York City in 1978 to learn filmmaking and cinema studies at New York University. In 1993, he attended the Independent Study Program of the Whitney Museum of American Art. He is a cross-disciplinary artist recognized for his precise use of materials, ranging from traditional art supplies to such non-art materials as mortician’s wax, industrial reflective paint, latent fingerprint powder and gunpowder. Trained as a filmmaker, he works in a montage-like or metonymical manner, a ‘horizontal’ approach that allows him to utilize the associative power of adjacent images and artworks. The crux of his art is subjectivity or self. Masculinity, violence, sexuality, loss and America are recurring themes. In 1995, Beck was awarded a New York Foundation for the Arts Fellowship, in Printmaking/Drawing/Artists’ Books, as well as an Art Matters, Inc. grant. He received a Louis Comfort Tiffany Foundation Award in 1999. In 2007, Beck had a solo exhibition at the Wexner Center for the Arts in Columbus, OH. In 2008, Beck changed his given, or father’s, name as a work of art by a single vowel to Buck. In 2009, he bought a small off-grid property along the U.S.-Mexico border south of Marfa, Texas, where he finds inspiration. Buck’s practice is oriented by a constellation of influences, including artists Marcel Duchamp, Cy Twombly, Agnes Martin, Bruce Nauman and Cady Noland, filmmakers Robert Bresson and David Lynch, novelist Cormac McCarthy, forensic science, the American southwest and the teachings of French psychoanalyst Jacques Lacan. Since 2018, he has been an art editor of The Lacanian Review. His work is included in museum and private collections internationally. His moving image works are distributed by Electronic Arts Intermix, New York. He is represented in New York by Ulterior Gallery. In 2019, Buck received a Pollock-Krasner Foundation Award. Buck lives and works in New York City and far West Texas.