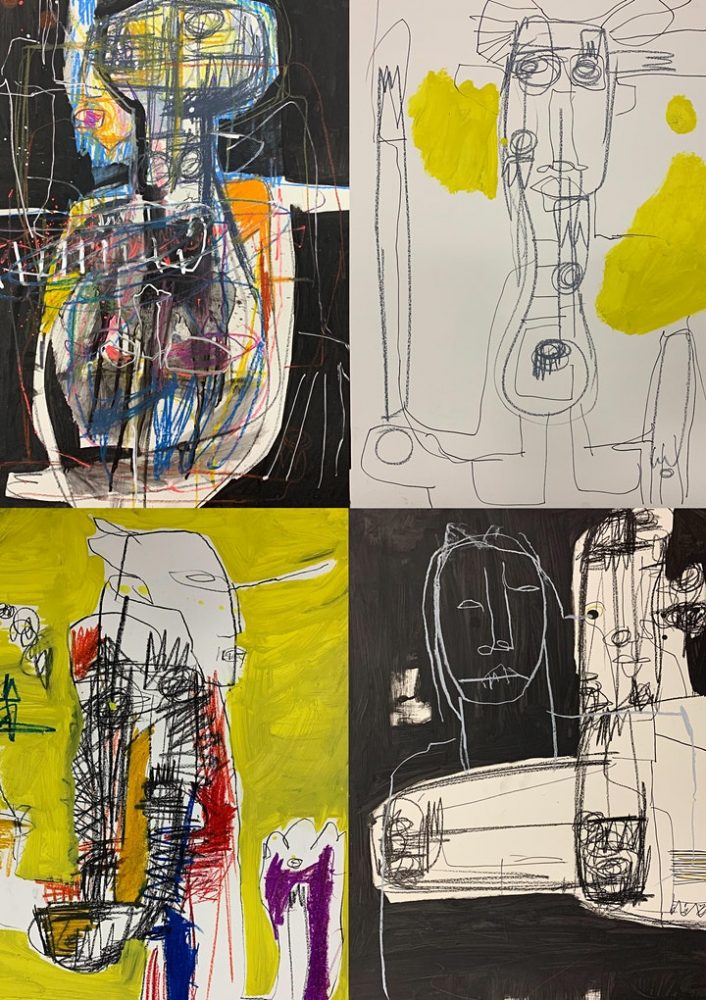 Tony McKissic and Terry Thompson collaborative exhibition of hundreds of works that the artists created together during the pandemic.

Poole and Hunt Pop-Up Gallery is a 20,000 square foot space tucked away in Clipper Mills specifically allocated for this exhibition. It’s located next to the Woodberry Kitchen in the historic Clipper Mills complex.

In December 2020, Tony McKissic and Terry Thompson combined their studio practices, resulting in the production of a unique body of work. Their fusion of creatives synergies produced a fluidity of new gestural, figurative, Neo-expressionism vistas. House Music is the back drop of their spontaneous mode of paintings that combine spiritual, emotional, poetic narratives stimulated by the sound. Their collaboration is centered on the subconscious interpretation of abstract portraitures. The works are the spontaneous development of characters manifested through the rhythmic vibes of cosmic energy. The beat in Thompson’s studio conjured up the ghosts, spirits, surreal elements that evoked the emotional connections to the dance floor pimps, baby powder and angels of the dance.

McKissic and Thompson uses music as the roadmaps to travel down exploratory lanes, that pick up lines, curves, facial gestures entrenched in each passenger. They are the drivers directing traffic with their overlapping drawings, paint, and the merging of both styles like a dj mixing records. Their seamless blends of layers of drawing lines, push and pull collaboration finds sweet spot in these works. Tony’s ghost figures and Thompson’s fantasy women captures the artists mood during this collaborative period.

Anthony McKissic is an American painter, multi-disciplinary artist, born in Washington, District of Columbia. He currently lives and work in Baltimore. He holds a MFA from The University of Baltimore (2021), MA from the Maryland Institute College of Art of Arts (2003), and a BFA from Maryland Institute of Arts (1999). His research on African community identity within the Americas, led him through the American south, Cuba, Haiti, Central and South America from 1999 through 2008, which has influenced his quilts, collages, photographs and writing.

Anthony uses his works to tell stories influenced by rhythms and rituals. His explorations into sub-cultures resulting from the merger of Africans and Western civilization, have greatly informed the way he approaches art. There is a direct correlation between the work that Anthony makes and work that already exits within black spaces. He invites the spirit of past lives and present phenoms, into his process. Celebrating a continuum of traditional improvisational themes.

“My work is an attempt to reach back and grab some of that mojo juice, that one might associate with Blues. I just grab my materials and start playing, like the old guys might do, with their guitars and such. I love making images, and view my work as visual music.”

Terry Thompson is an American artist, born in Chicago. He currently lives and work in Baltimore, Maryland.

He spent most of his studio practice over the last 10 years, creating large-scale paintings of spontaneous gestures on linen canvas with a diverse applications of color that stretches the limits between impulse and recurring motifs. He established and assembled a wide range of narratives through his diverse practices that transcends the boundaries of figurative surrealism and post-modern abstraction traditions. His exploratory inventive process of collage making, painting and drawing speaks to a modern vocabulary.

“This pandemic is crazy, however I am glad this moment has brought Tony and I together to create an awesome body of work that hopefully will speak to future audiences ——adversity can’t stop creativity”