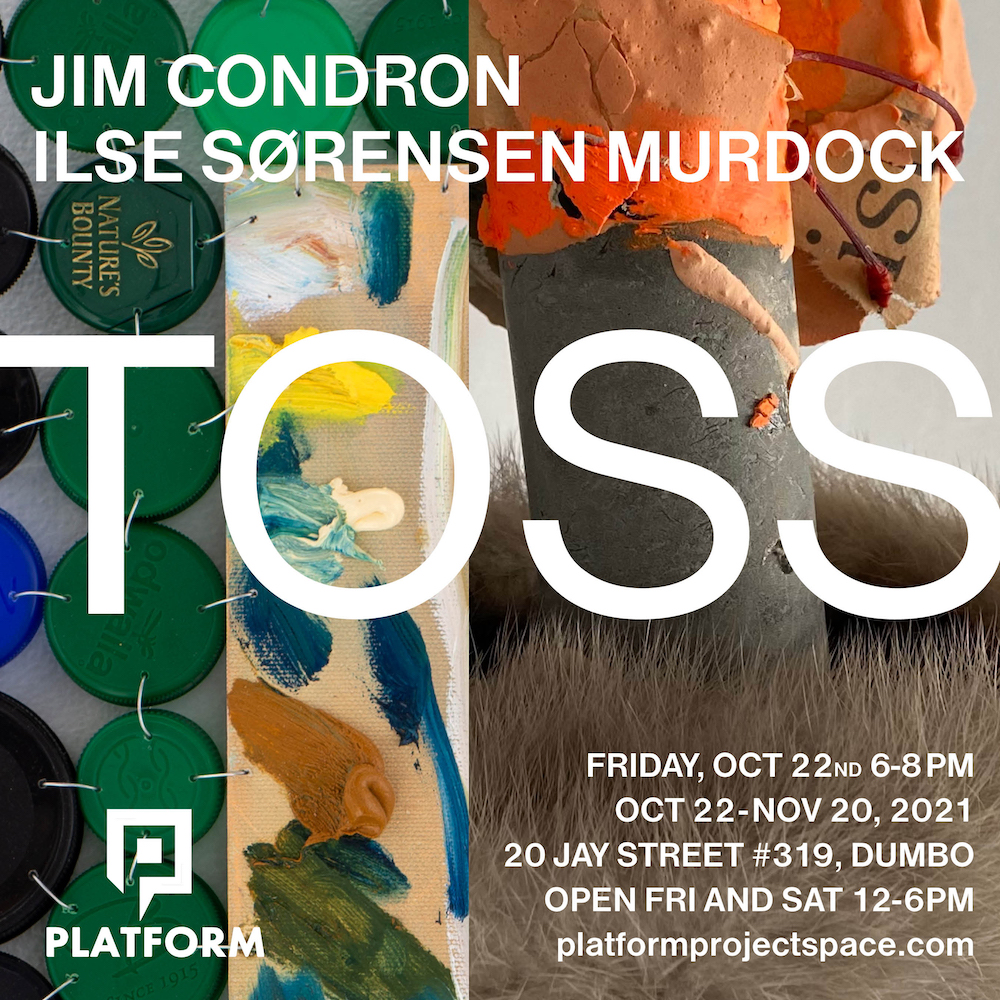 Platform is pleased to present Toss, a two-person show by artists Ilse Sørensen Murdock and Jim Condron. Toss refers to both artists’ inventive use of found and salvaged materials to push beyond the traditional rectangle of painting: things left behind are recovered and made active through their practice. Yet even with the use of unconventional materials like socks, fur remnants, plastic caps and cut wood, the artists prioritize concerns of color, texture and space.

Ilse Sørensen Murdock is an outdoor painter who uses the site of painting to explore a direct relationship to nature. Her openness to her surroundings is evident in her nuanced and rhythmic approach to mark making. Her large plein air paintings are made through a physical interaction with her surroundings; she lays un-stretched canvas directly on ground, feeling her way across the surface terrain below as she paints the world she sees. Meanwhile, her practice of collecting everyday plastic caps and affixing them to paintings is further testimony to her deep urge to heal from what could be viewed as our current planetary plastic binge. Visually, within the painting context, plastic caps become a reminder of the scale of the consumptive human hand, while their synthetic colors play against live color of pure paint pigment.  Murdoch uses the caps to forge new color, compositional and spatial relationships with the painted surface. She aims to salvage what she can of a natural environment that at times seems to be slipping through our fingers.

Jim Condron’s original three-dimensional works take a painterly approach to sculpture. Like an intimist painter, there is a history and resonance in the objects chosen as raw material, ranging from socks, yarn and wood, to common household utensils. He combines found items with an immediacy and lack of preciousness towards their original use, resulting in a refreshing new look at their tactile qualities; often materials like fur feel like a brushstroke. Some of the pieces have the playfulness of surrealist sculpture. Memory is elicited from connotations associated with glimpses of recognizable fragments, as well as abstract forms and color.  Paint is used formally, but also symbolically, adding another layer of meaning through color and texture. A matchbook or coin in Condron’s work serves as a pathway into the content of the piece.  He and Murdock traverse a fine line, questioning when using a found item is a casual gesture or whether this non-complicity with consumption, remarkably, could be viewed as a defiant act.

Ilse Sørensen Murdock studied painting at the New York Studio School and philosophy and religious studies at New York University before earning a BFA from Parsons School of Design, 2000, and MFA from Rutgers University at the Mason Gross School of the Arts, 2009.  She was resident of the Skowhegan School of Painting & Sculpture in 2012. Murdock received the 2019 Cultural Award Grant from the American Scandinavian Society, concluding in an exhibition at the Trygve Lie Gallery, New York, 2020 and was included in a survey of painting Here and Now at the Center for Contemporary Art, Bedminster, New Jersey, 2020. She currently

Originally from Long Island, NY, Jim Condron earned his MFA at the Hofffberger School of Painting of the Maryland Institute College of Art, and a BA in Art History and English from Colby College. He also studied at the New York Studio School.  Condron is a recipient of a Pollock Krasner Foundation grant, an Adolf and Esther Gottlieb Foundation grant.  He is an Edward F. Albee Foundation fellow and has been awarded a number of other residencies.