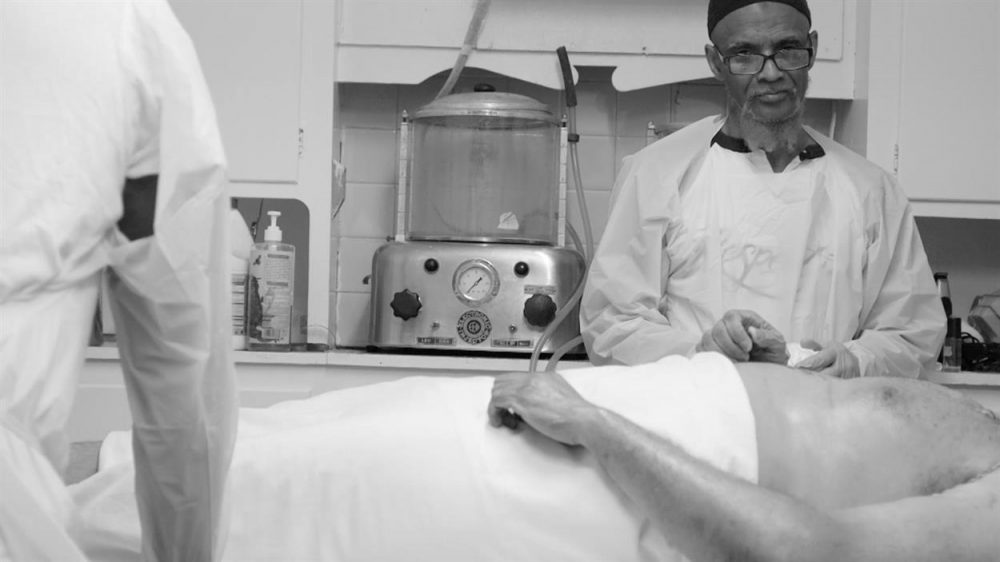 This screening will be followed by a discussion between members of the TWO GODS film team, Aman Ali and Hanif, moderated by journalist, Lawrence Burney.

For the past 10 years, Baltimore Living Archives Artist in Residence Lawrence Burney has been a lead journalist telling the usually hidden and untold stories highlighting Baltimore + the DMV’s most captivating music, visual arts, and the surrounding culture that informs both. This summer Lawrence curates a series of films that in one way or another, have helped him gain a better understanding of self. Whether they affirm personal experiences, help make more sense of family & communities that raised him, or altered the way he approaches his work, each is crucial to his growth as a man and a curatorial force. True Laurels Summer Films present an opportunity for Lawrence to share how he sees the world with the public.

Two Gods Synopsis
Hanif is a Muslim casket maker and ritual body washer in Newark, New Jersey He mentors two kids— Furquan, a confident 12- year-old who comes from a rough home and Naz, a 17-year -old who has been fighting through his own struggles as a young black man growing up in Newark. Hardship comes when Furquan’s home life becomes more turbulent and Naz gets caught up in a serious arrest. Hanif fears he has failed as a mentor and begins to fall into a downward spiral. During each of their darkest moments, they take what they’ve learned from their pasts and from each other to pull through. And through faith, brotherhood and redemption they find their purpose.

“Two Gods is a blueprint to documenting a community. This film’s texture, storytelling, and cinematography are what I aspire to in my pursuits of breaking into film. Hanif is at a crucial crossroads of defining a new, brighter chapter in his life but his dedication tokids that he sees himself in is beginning to weigh down on him. And the people that he coexists with recognize the kindness of his heart, though some do grow tired of his missteps. It’s a beautiful depiction of the ebbs and flows that life can take you on and how, more times than not, things don’t go the way you’d like.”  – Lawrence Burney

Baltimore Living Archives is a collective place keeping project that builds community and civic engagement, centered around the sharing of stories through film and media co-produced by The SNF Parkway Theatre and the Enoch Pratt Library. Baltimore Living Archives is an artist residency that invites Baltimoreans to craft and showcase media-based stories alongside two Baltimore artists with archiving practices, SHAN Wallace and Lawrence Burney. SHAN and Lawrence will develop their own work and work with the community, sharing skills and stories through a number of participatory programs. Members of the community will be invited to share their stories, explore and contextualize archives, and enjoy the findings of SHAN and Lawrence.