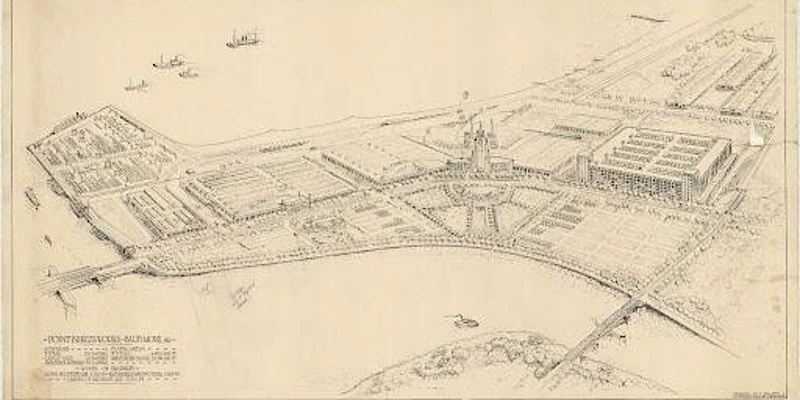 The Baltimore Architecture Foundation (BAF) and Baltimore Heritage host this Virtual Histories Series of 30 minute live presentations and virtual tours, focusing on architecture, preservation and history of the Baltimore region twice a month on Fridays at 1:00 pm EST. Tickets are donation based. We encourage you to give what you can to support these organizations to help make up for lost tour and program revenue from COVID-19 and create more virtual programs like this.

This special program is hosted in partnership with the Friends of Maryland’s Olmsted Parks & Landscapes (FMOPL) as part of their Olmsted 200 programming, a nationwide celebration of the firm’s work and influence, on the Bicentennial Anniversary of Frederick Law Olmsted’s birth.

The Western Electric Company was founded in 1869 and served for more than 100 years as the manufacturing and supply unit of the Bell System. Its business and manufacturing activity skyrocketed from increased telephone use at the beginning of the 1900s. The company selected Baltimore as the site of a new cable and wire manufacturing plant due to its proximity to water and rail transportation. The company purchased land along the Patapsco River Neck from the Canton Company and the River View Amusement Park, with grand plans to develop the site into a large manufacturing campus.

To complete a comprehensive plan for the new site at Point Breeze, the company hired the Olmsted Brothers firm. Between 1928 and 1931, the Olmsted Brothers prepared at least 263 drawings, including a comprehensive master plan and detailed landscape plans. Western Electric razed the amusement park to construct the Point Breeze plant, which was dubbed “The Playground That Went to Work.” The plant began operations in 1930 at the heart of the Depression. Likened to an “industrial city”, the plant included large-scale industrial buildings, a power plant, and a network of utility infrastructure and railroad tracks, along with enhancements for employees, such as a restaurant cafe, recreational facilities, landscaped gardens, tree-lined boulevards, and underground pedestrian tunnels.

The majority of the buildings were built in the Art Deco architectural style, and later buildings repeated some of those elements, providing visual and physical continuity throughout the complex. The collection of buildings, constructed between 1929 and 1970, is largely intact despite the Western Electric Company ceasing operations at the site in 1984. The peninsula now contains the Point Breeze Business Park and the Seagirt Marine Terminal.

Three experts will share their knowledge of this unique collection of buildings and site that was the industrial community to 6,000 workers in its heyday.