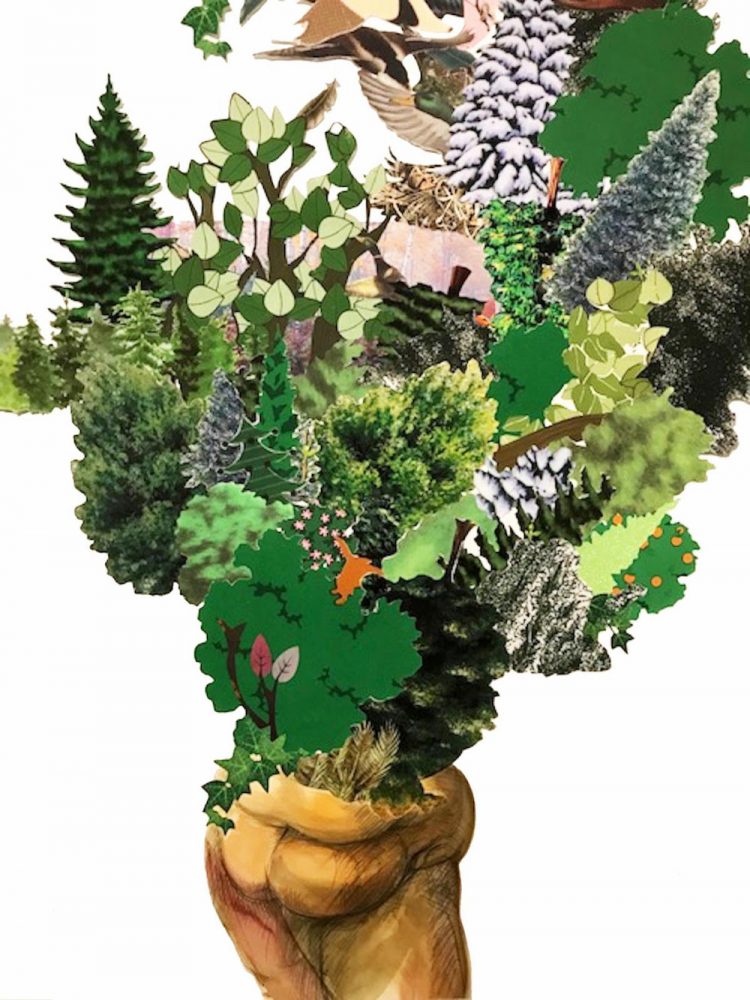 Grimaldis Gallery is pleased to present The Domestic, a solo exhibition of works by Zoë Charlton. In an investigation of race, power, and gender, Charlton’s large-scale collages immerse the viewer in lush bodily forms that explode into fragmented landscapes and expressive whimsy.

Zoë Charlton has dedicated her practice to the representation of the sexualized bodies of black women. She is at once calling out objectification and practicing celebration. Emerging from her figures are bursts of verdant flora, idealistic clouds, and waves of fowl in flight. These elements are made from found materials, referencing the play of childhood craft. Yet deep within the folds of greenery are hints of tourism and history. In a work from her Compromise Series “meant for the home-bred” (2019), Charlton depicts her grandmother’s Tallahassee home engulfed in foliage. She memorializes the home of Everlena Bates to emphasize the importance and power of the black matriarch.

Charlton’s figures draw the line between divinity and madness by combining smooth curves and hints of fertility with the chaos of dense collage. Her exhibition title, The Domestic, emphasizes the body’s relationship to class politics and the idea of home. Within The Domestic lies a duality of sanctuary and service – the home being a place of menial tasks and historically biased remuneration. This tension builds at the cores of these bodies, and erupts in a fantastical and visceral release.

Zoë Charlton has work in numerous public collections including the Phillips Collection, Arkansas Art Center, Birmingham Museum of Art, Rose Art Museum at Brandeis University, Crystal Bridges Museum of American Art, and the Studio Museum in Harlem. She received a Grit Fund Grant and a Rubys Grant from the Robert W. Deutsch Foundation in 2016 and 2014 respectively, as well as a Pollock-Krasner Foundation Grant in 2012. Zoë Charlton has had recent solo exhibitions at CulturalDC Mobile Arts Gallery, Penn State University’s HUB-Robeson Gallery, Gettysburg College’s Schmucker Gallery, and G Fine Art. She is currently an Associate Professor at American University and holds a seat on the Maryland State Arts Council. She is co-founder the collaborative art initiative ‘sindikit with artist Tim Doud.