All in the Sound: New Vocal Music by Peter Dayton – Album Release Concert 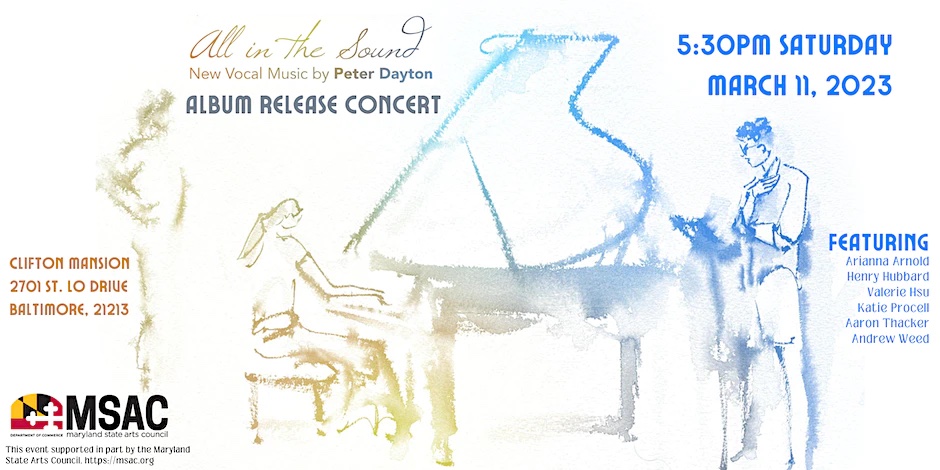 Join us at Clifton Mansion for the release party for composer Peter Dayton’s album “All in the Sound: New Vocal Music by Peter Dayton”, starring a host of Baltimore artists performing Peter’s art songs from the past 8 years. The album release event will feature limited-print physical CDs and will celebrate the recent (March 1) release of the digital album.

This concert event is supported by a generous Creativity Grant from the Maryland State Arts Council. https://www.msac.org/

In acknowledgment of the on-going COVID-19 pandemic. Masks are required while indoors during the concert event. Seating is limited for this event and tickets must be purchased in advance.

Album Description:
Following his 2022 release, STORIES OUT OF CHERRY STEMS, this latest collection of vocal music by Baltimore-based composer Peter Dayton reinforces his establishment as a mature and formidable talent in the world of art song. ALL IN THE SOUND captures the heart of the genre: duet between voice and accompaniment. Characteristically and integrally, Dayton’s songs exhibit internal compositional logics of pervasive rhythmic patterns and intervallic relationships that create music that still viscerally satisfies. The album takes listeners on a captivating journey through physical, emotional, and abstract imagery. Triumphantly, Dayton’s music realizes the poignancies possible in the duet that is art song.