At The Center of Every Direction 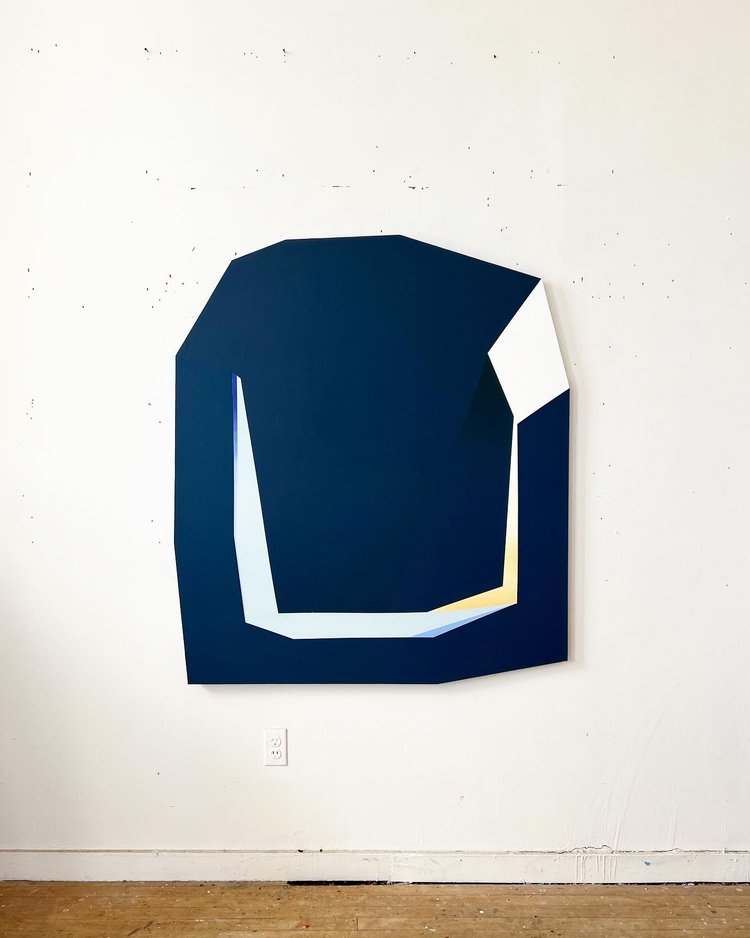 The Gallery at Manor Mill is pleased to present  “At The Center of Every Direction,” a two-person exhibition of abstract painters Emma Childs and Penn Eastburn.

In this current body of work, Childs has been developing a language of painting that allows her to explore the way we exist in the world we build around us. Childs’ work explores moments of chaos and mundanity, freedom and containment, isolation and contact. She is interested in the ability of a work to evoke an energetically emotional response from the viewer as well as creating objects that physically interact with their environment, to walk a line between creating something self-contained as well as reaching outward.

While creating efficiently eloquent shapes, choices of color and application are integral steps within Childs’ process. Transforming experiences and emotions into a language of simplified form, color, edge, and paint applications has allowed her to simplify what are actually complicated interconnected metaphors about relationships and the world we build around us.

Eastburn’s approach, varying in order, includes bleaching, dying, sanding, sewing, weaving, and folding of the canvas. The ability to access each open side from any angle, above and below, lays the groundwork on which Penn searches for order, for pattern, for regularity, and for rhythm. With an emphasis on letting the paint be paint, his initial process opens a direct conversation with the materials and inevitably leaves behind evidence of the means by which each final image arrives. Like tracks through snow, the details within his paintings hum, often to their own frequency, in delicate disharmony.

Penn’s alternate theory of “precision” is displayed through his gesture or, more specifically, through a swell of decisions underlying each of his compositions. Throughout his latest body of work, vintage photographs are methodically integrated and reordered to fit into the logic of abstract paintings, moving beyond individual elements of paint and paper toward what might be considered the essence of image-making itself. No longer representing moments of the past or what we’d expect to find cramped within a dusty photo album, the combined multimedia—with their varying degrees of built-in compression and tension—offer a cool confrontation of past, present, and future.

American painter Emma Childs was born and raised in Baltimore, Maryland, where she lives and works today. Childs graduated from the Maryland Institute College of Art (MICA) with a BFA in General Fine Arts. She has participated in an artist residency at Arts Warehouse in Delray Beach, Florida, and is currently a resident at School 33 Art Center in Baltimore. Childs has been featured in British Vogue, UK House and Garden, Create! Magazine, Artmaze Magazine London, and most recently New American Paintings Issue 154. Childs’ work is held in collections across the United States as well as around the world, including the UK, France, Canada, and the Netherlands.. She is represented by Rhodes Contemporary in London, UK, and Hidell Brooks Gallery in Charlotte, NC.

Steven Pennock “Penn” Eastburn s a painter currently based in Brooklyn, NY. His work explores the accidental beauty and abstraction of ordinary, often overlooked spaces and materials found in the urban landscape. Raised in Maryland, he attended St.Paul’s School and later received his Bachelor of Arts in Film and New Media from the University of Utah in 2012. Penn received his MFA from the LeRoy E. Hoffberger School of Painting at the Maryland Institute College of Art in 2022.

To learn more about the artists, please visit emmachildsart.com and penneastburn.com

Manor Mill is a newly restored, pre-revolutionary grist mill that now houses a fine arts gallery,  artisanal gift shop, musical performances, ceramics, workshops across all disciplines and  organizational retreats, yoga and meditation. Manor Mill is a community built upon creativity and  learning, rooted in history and situated in the most beautiful area of rural Baltimore County in  Monkton, MD.