Don’t Bother Me, I Can’t Cope 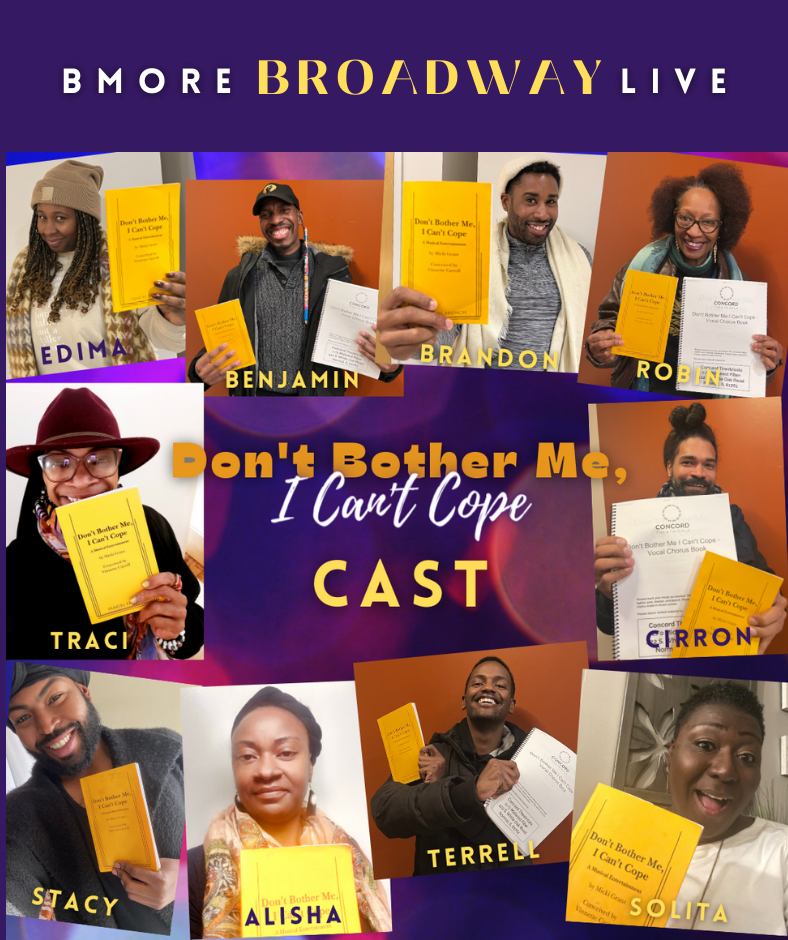 Dance & Bmore has announced its newest program, Bmore Broadway Live, dedicated to producing Broadway-caliber shows with Baltimore talent. Each Bmore Broadway Live season will include two musicals: one historic Black musical during Black History Month in February and another show in the spring, alongside a variety of community classes and events for theater-lovers.

The inaugural Bmore Broadway Live season will begin in February 2023 with a production of Don’t Bother Me, I Can’t Cope. This musical revue focusing on the African American experience holds an important place in theater history. Its director, Vinnette Carroll, was the first Black woman to direct a Broadway show; its trailblazing composer, Micki Grant, was the first woman to write the book, music, and lyrics of a Broadway show.

CJay Philip will direct and choreograph the 2023 production of Cope at the Motor House. Philip is a Broadway alum, having appeared in the original productions of Hairspray, Big the Musical, and Street Corner Symphony plus the Broadway national tour of Legally Blonde. Philip said, “In 2007, I was chosen by Broadway’s ‘who’s who’ as one of six artists to win Dance Break, which features the next generation of great Broadway choreographers. Then in 2009, we moved to Baltimore and people thought I was crazy. My creativity and its connection to community has grown tremendously since making that move, and I’m so grateful to call Baltimore home. I love the Baltimore art scene and I know that every bit of talent needed to tell compelling Broadway stories exists here, so I’m excited to launch Bmore Broadway Live to produce show-stopping community-centered theater for all to enjoy.”

Attendees of the February production can expect an exciting synthesis of visual and performing arts. Philip is collaborating with Baltimore-born international artist Larry “Poncho” Brown, whose artwork tied to themes of the Black experience will be on display during the run of the show. The show will feature costumes created by designer Yelé, a resident artist at the Motor House, whose work, including the costumes worn by the actors, will be available for sale. The show sponsorship packages include select designs by Yelé as well as stunning Larry “Poncho” Brown prints.

Dance & Bmore is also a resident artist at the Motor House and is excited to stage three productions in the Motor House’s black box theater in 2023: Cope in February, a second dance musical in the Spring, and their original musical Voices of Carmen in July, which was recognized by the 2022 Tony Awards. The 2023 production of Cope will run February 4th–12th at the Motor House.

Alongside the February performances of Cope, Bmore Broadway Live will host interactive  community events with a Broadway theme, including a Broadway dance class and an open mic night for Broadway scenes, dances, and songs, at which the Spring 2023 production will be announced. These events will culminate with a panel celebrating the work of director Vinnette Carroll and highlighting local Black woman directors, including Philip herself, Rain Pryor, Mari Andrea Travis, and others.

Dance & Bmore’s program AMP Up! for youth aged 16–24 is working in tandem with the adult production of Cope. A cohort of 8-10 alum from Voices of Carmen will collaborate with writing and theater-making mentors to devise original performance pieces that will help audiences contextualize the history and legacy of Cope and its creators. These “edutainment” pieces, plus excerpts from Cope, will be performed at the Reginald F. Lewis Museum of Maryland African American History and Culture for Martin Luther King, Jr. Day on January 16th at 12 noon. They will also be presented before select performances of Cope during the February run at the Motor House.

Tickets go on sale in January. In the meantime, follow the Bmore Broadway Live Facebook page to meet the cast and creative team and see behind the scenes of the creative process.

For more about the shows and season email bmorebwaylive@gmail.com or visit the Dance & Bmore website at http://danceandbmore.com/ or BmoreBwayLive webpage

For more information or to schedule an interview, please contact Lauren Erazo at laurene.dab@gmail.com or call Dance & Bmore at 410-871-8322.