Lecture | Blue Like Me: The Art of Siona Benjamin 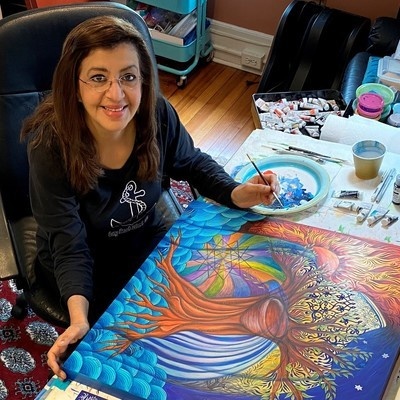 The Department of Art + Design, Art History, Art Education and Baltimore Hebrew Institute of Towson University present a lecture by artist Siona Benjamin. Benjamin is a painter originally from Bombay, now living in the US. Her work reflects her background of being brought up a Bene Israel Jew in a predominantly Hindu and Muslim India. In her paintings she combines the imagery of her past with the role she plays in America today, making a mosaic inspired by both Indian miniature paintings, transcultural myth and iconography. She has her first MFA in painting and a second MFA in theater set design. She has exhibited in the US, Europe, and Asia. She was awarded a Fulbright Fellowship in 2011 for an art project titled: “Faces: Weaving Indian Jewish Narratives” and a second Fulbright in 2016-17 for an art project titled: “From Motherland to Fatherland: Transcultural Indian Jews in Israel.”