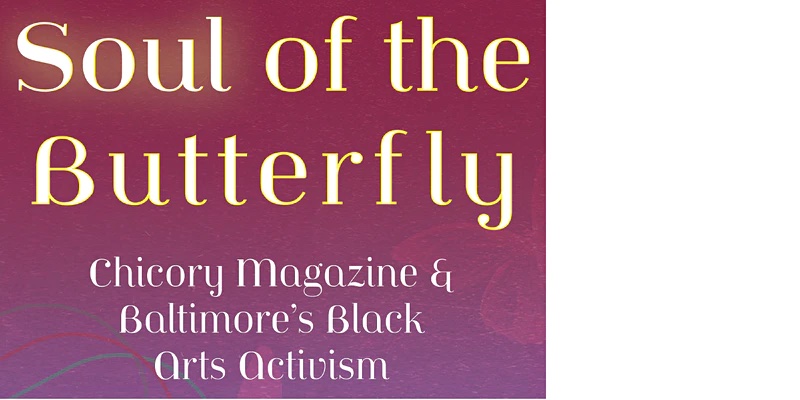 The exhibit Soul of the Butterfly: Chicory Magazine and Baltimore’s Black Arts Activism, which tells the story of how Black people in Baltimore have used art for activism since the 1960s, is opening June 24, 2022 at the Central Branch of the Enoch Pratt Free Library.

Created through a collaboration between the Chicory Revitalization Project, Rutgers University-Newark, Dewmore Baltimore, Writers in Baltimore Schools (WBS), Bard High School Early College Baltimore, Enoch Pratt Free Library and former editors of Chicory, the exhibit provided an opportunity for young Baltimore writers of color to explore the work of earlier generations of local artist-activists and Baltimore’s history. Soul of the Butterfly will be on display from June 24-July 10, 2022. An opening event on June 24, 2022, will launch the exhibit with a public celebration.

Chicory magazine was created by late Baltimore poet Sam Cornish and was published from 1966-1983 by Pratt Library. It was digitized and made publicly available in 2017. Originally funded through the federal War on Poverty, the library recognized its importance to the community and continued publishing it for decades.

“Chicory magazine was born out of the Black Arts Movement, the largest cultural upsurge of Black people in the twentieth century,” says Melvin E. Brown, Chicory Editor from 1971-1980. “Informed by the Black Arts Movement, Chicory poets and writers spoke truth to power, and often bridged the gap between literature and activism. It is important for young people to know Chicory writers as progenitors of the creative expression of today, who often faced the same issues decades ago.”

Because of the tumultuous time period it spanned, the magazine documents the voices of everyday Black people, from children to elders, from social workers to men in prison, about everything from the civil rights and Black Power movements, the 1968 riot after Martin Luther King Jr.’s death, the beginning of the War on Drugs and mass incarceration to daily life in Baltimore. When an anthology of Chicory poems was published in 1969, the Baltimore Afro-American newspaper called it, “the most authentic microphone of Black people talking ever devised.”

Soul of the Butterfly uses Chicory to examine how artist-activists responded through their art to the structural racism hurting Black communities in Baltimore since the 1960s.

The exhibit is divided into four sections. One details the history of Chicory and highlights the involvement of Lucille Clifton, former Poet Laureate of Maryland, who mentored several Chicory editors and writers, wrote an introduction to a special issue about all-girls Eastern High School, and judged a poetry contest for the magazine. Chicory was also a launching pad for several people who became professional writers, from poet, playwright and educator Afaa Michael Weaver to first Black presidential speechwriter Terry Edmonds to journalist Rafael Alvarez.

A section on mental health examines how poetry can be used as a tool for personal healing from the stresses caused by structural racism. It shows how Black communities responded to increasing drug availability and incarceration starting in the 1970s. Many Chicory poets celebrated the resiliency and beauty of the Black community, which is described in a subsection on Black joy.

The environment section discusses Baltimore’s shameful history of housing segregation and displacement of Black communities. The exhibit examines how poets, muralists, and others have used art to raise awareness of these issues and claim space for their community.

A section on opportunity looks at education and Black institutions. This section tells the little known history of the SOUL School, a Black cultural nationalist school in West Baltimore in the 1960s and early 1970s, that taught young Black people about their cultural heritage as a way to empower them.

“The kind of writing that appears in Chicory is poetry but I read it as reportage, authentic, feet-on-the-ground responding to what’s not necessarily covered in the mainstream,” said Patrick Oray, faculty in literature at Bard Baltimore, and advisor for the exhibit.

Students from Rutgers University-Newark, Dewmore Baltimore, WBS and Bard collaborated to develop the themes and topics of the historical part of the exhibit through listening sessions on Zoom. Baltimore youth shifted from advisors to content creators in the last few months to create pieces of the exhibit that bring its themes to the present.

“I’m excited to be part of this project, I really am. It gives me a chance to let go and just be myself. It gives me freedom,” said Taye Caldwell, a 7th grader involved with WBS.

“I never participated in a collaborative project as extensive as this one. The Baltimore students showed up to the meetings excited and ready to give constructive feedback. Their passion for revitalizing Chicory magazine inspired me to show up as much as I possibly could,” said Jamisha Montague, an undergraduate student in African American and African studies at Rutgers University-Newark.

Young Baltimore writers added their own components to the exhibit showing the connections between the history and their lives in present-day Baltimore.

“We can look at how the conversations and the content are so similar between what was in Chicory and today, but it’s not just an echo, it’s a conversation that’s happening across time periods. Chicory is a living testament of that possibility,” said Victor Rodgers/Slangston Hughes, artistic coordinator for Dewmore Baltimore.

Soul of the Butterfly: Chicory Magazine and Baltimore’s Black Arts Activism exhibition opens at the Central Branch of the Enoch Pratt Free Library on June 24, 2022. It will be on display until July 10. It will travel to other Baltimore branch libraries over the next year. RSVP for opening event here.

Soul of the Butterfly was created with the generous support of the Whiting Foundation, Rutgers University-Newark, and Pratt Library.