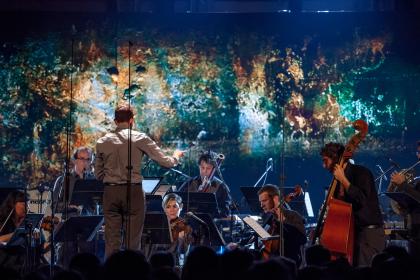 Join us in person at The Clarice! Please note that this performance will not be livestreamed.

“One of the most vital and original ensembles on the American music scene” (The New York Times), Alarm Will Sound is a 20-member band that has established a reputation for performing demanding music with energetic virtuosity. This matinee performance features the world premiere of  Love Always, commissioned by The Clarice, along with Alyssa Piper’s Cradle.

Love Always, a song cycle co-created by Allison Loggins-Hull and Toshi Reagon, is rooted in long-standing African American traditions of elders writing letters to their children, and of storytelling through music, conversation and listening. Inspired by James Baldwin’s “The Fire Next Time” and Ta-Nehisi Coates’s “Between the World and Me,” Allison writes letters to her own son, which serve as the text in this piece and as a call for understanding to allow her son to navigate through this world. Toshi’s offering to this song cycle tells three of her stories: Toshi Seeger (her Godmother), Toshi Georgiana Widoff Woodson (her Goddaughter and Toshi herself.

Alyssa Pyper initially created Cradle as a solo work for violin, loop pedal and voice as part of a symbolic journey into the trauma of growing up queer, classically trained and Mormon. In equal part, the composition of the piece emerged through the composer’s dissonance with not only fundamentalist religion, but a pedagogy of classical violin dispersed through the frame of a perfectionist religious culture. Through a close mentorship, members of Alarm Will Sound co-created with Pyper a version of Cradle that allows for members of an ensemble to tap into its arc and participate in its call.

This event is part of the Visiting Artist Series. The Clarice’s Visiting Artist Series features regional, national and international artists who visit the University of Maryland for performances and other activities. Beyond the stunning work these artists bring to the stage, they are also committed to extensive engagement that creates exciting connections with students and the community. During their time at UMD, members of Alarm Will Sound will have engaged in: