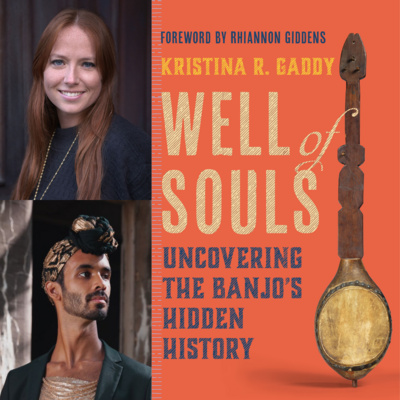 Kristina Gaddy will explore the roots of the banjo and the role it has played in Black rituals and rebellion.  The instrument, conceived in the 17th century by enslaved people of African descent, was carried to the Americas and later appropriated in the 19th century.   Its origins were subsequently forgotten as it was enveloped into jazz, bluegrass, and country music.  Kristina Gaddy will be joined in conversation by award-winning musician and scholar Jake Blount.

A performance by folk music band Silo, Seth Swingle and Fiona Balestrieri, will precede the author program starting at 6:30pm.

Kristina Gaddy is the author of Flowers in the Gutter: The True Story of the Edelweiss Pirates, Teenagers Who Resisted the Nazis.   Her writing has appeared in several publications including The Washington Post and The Baltimore Sun.

Jake Blount is an award-winning musician and scholar, who has received the Steve Martin Banjo Prize and is a two-time winner of the Appalachian String Band Music Festival.   His first solo album, Spider Tales, debuted at #2 on the Billboard Bluegrass Chart in 2020.   His forthcoming album, The New Faith, will be released on September 23, 2022.

This FREE event will be presented in-person and virtually.

To attend in person we strongly encourage you to register here.

Books for sale provided by Atomic Books.  Order your copy of Well of Souls here.