A Response by Amy Eva Raehse 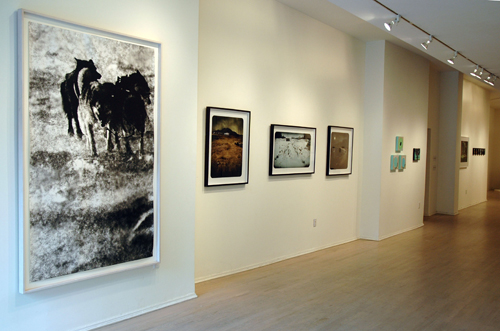 Viewing contemporary art is fast becoming a thankless, numbing task. Venturing into a museum, art space, or gallery is like walking into a room full of seemingly lively, engaging, even edgy people – only to find, when you get up close and personal, that all they can talk about is the most recent NPR-All-Things-Considered pabulum. When you get one-on-one with a lot of current work you find that it’s an assortment of global spiciness, “daring” naughtiness, and Free World pieties all wrapped around a self-absorbed, Almighty “I” – and this tidy package offers itself to viewers in such a way that, they too, can launch into a discourse on the work with a confident, leading “I think”,” or “I believe.” Despite the surface sparkle or shock, and promises of “dialogue,” a lot of today’s art is just narcissistic bland-diet-on-the-wall.

Most curators, gallery directors, collectors, and academic custodians of visual art, once apologetically bourgeois, are now shamelessly, stridently middle brow, and the exhibitions they generate, like cocktail conversations, are often little more than a struggle to maintain appearances, offer little or no offense, and allow everyone to get through the evening without falling asleep. Standing in the vacuum of some trendy exhibition, or some thesis show post-mortem where kissie-face, or wan, studied posturing is the full fathom of intimacy and depth, you get the feeling that you’d like to trade all of this hip, “promising,” MFA-certified endeavor for one original, crusty gallery of the long-lost Betty Parsons (“Who?”) ilk, or an artist whose “experience” is a little more encompassing than a head full of MySpace, junk food movies, or undigested October Magazine pulp. It’s similar to the feeling you get in a trendy eatery, with its suburban comfort-level decor, and a pedigreed wait-staff that fawns at your table only to deliver up a plateful of “Presentation sans Substance” – you find yourself longing for a darker, less conspicuous place where a cosmopolitan, venerable staff knows their stuff, are gracious but assertive in their knowledge, and actually can deliver a sumptuous, surprising meal. 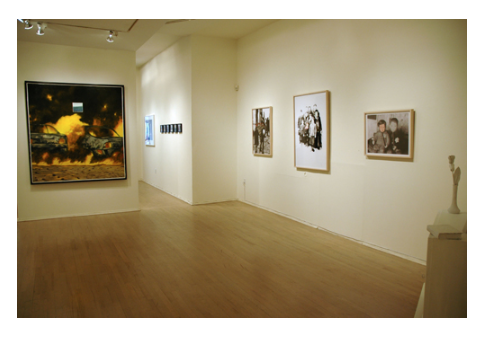 Grimaldis Gallery is one of the oldest and most seasoned galleries in Baltimore, currently celebrating its 30th Anniversary as a showplace for contemporary art. Given this sort of staying power and stature, a viewer could anticipate something promising, or be wary of encountering a more staid version of the fashionable status quo – or a little of both.

A lot of “emerging” galleries pay considerable lip service to “nurturing an artist’s career” (which, when you think about it, is a creepy synthesis of Mommy-Talk and Corporate-Speak). To really build an artist’s reputation – and a gallery’s as well – is a high-wire act that is a concoction of adventure, intuition, skill, and risk – volatile factors which scare the bejesus out of the Mommy-Talk/Corporate Speak entrepreneurs – and their stables of skittish, career-groomed artists. Grimaldis’ achievement is likely based on a promise made long ago to be an enviable high-wire act, not just a study in bottom-line perfection – and if certain recent shows are any indicator, Grimaldis is celebrating its anniversary year by reaffirming that promise. And Lorna Bieber’s current “Mural Photographs” exhibition, through June 9, certainly makes good on that reaffirmation.

At first contact Lorna Bieber’s photographs work on the eye in a quiet, seemingly unassuming way. Given only a cursory glance, they might even appear to be yet another round of repetitive documentation for some cerebral centerpiece that’s cagily buried just off-stage within a formidable “support text.” There’s a spectral hush about the initial contact with this work that’s a little daunting – particularly the large grid array composed of one-hundred-and-fourteen 17″ X 11″ silver print photographs. Maybe it’s the snow, which seems to burden the solitary or clustered pines which occupy so many of the images. Maybe it’s the vaguely American West sense of solitude and wilderness that pervades these images. Or maybe it’s the eerie feeling that you’re being eye-balled – in a smaller adjacent chamber of the main gallery three vastly over-scale birds gawk, rustle, and gape. But within a few moments these images perceptively begin to shift, alert the eye, and dodge-and-burn the mind. In the uppermost line of the “Winter Trees” gridscape, a “deer” that’s really form and value with antlers, leaps once, twice, and away.

Here and there old telephone poles blurt up between the pines, spiking the billowing clouds. Just behind you, in two large wall works, shadowy canine forms lurk and lurch as though they’ve rounded the corner in a De Chirico to arrive in your Richter-esque here and now. And all the while, an unnerving, false serenity persists – with its abundant, billowing clouds, and small, snow-laden pines that remind you of, well, Maxfield Parrish, that venerable (in some quarters) American kitsch-wizard of androgynous youth in candy-colored, electric landscapes, all rapt with Alpine glow. 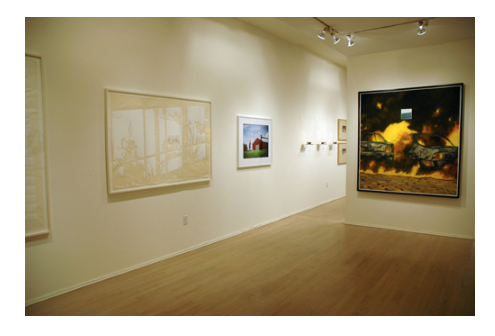 That the spectacularly colorful Parrish should come to mind in this setting is particularly bizarre – since, at their most obvious and literal, Lorna Bieber’s photographs are grainy, black and white, postmodern images. Certainly, despite the casual presentation of their raw, slightly distressed surfaces, Bieber’s works are compellingly lush – but that’s a far stretch to Parrish. But there’s another, odder, and perhaps more revealing connection to Parrish. Many of Parrish’s high-voltage paintings actually provided the visual drive of very successful ad campaigns for a number of High Modern corporations and products, including Edison-Mazda lighting, Colgate, and Hearst media. It’s estimated that in the 1920’s 1 out of 5 American homes contained Maxfield Parrish prints and calendars – along with the new tech products and media (light bulbs, radios, colorful mass-produced magazines) that these endearing images cunningly represented. Parrish essentially decked out the wolf of American mass market in the sheep’s clothing of cuddly nostalgia – and we’ve not been able to get Mr. Wolf out of the house since.

Not Grandma and Grandpa’s West

Lorna Bieber’s working process actually exploits, and reverses, the process that artists like Parrish started. This Region that she creates – and it’s not the West, but a remote and surprising visual realm of her own devising – begins in the familiar landscape of contemporary print media. She harvests images from magazines, newspapers, advertising, alters them through cut-up and collage, processes them through a photocopier, alters them again and again, selectively enlarging along the way through numerous generations, until she stops it all with a photograph – which makes perfect literal and metaphorical sense, since Photography itself is the ultimate Stop-Bath in the cascade of Modern experience. And the evidence of this process, visually resident in Bieber’s work, is what continually diverts the familiar into the unsettling. She’s closed off the cliched, visual comfort food associations of popular imagery, and re-opened it to admit what’s really latent within such imagery to begin with – unease, even foreboding.

In this unfamiliar terrain, Instinct is more telling than Reason. As you try to get your bearings in some pocket of this snow-bound Region, there’s an ambient “presence” which doesn’t quite fit the scenery, and scuttles any “message” reading. Something in your sensibility intuitively registers the whirr of a delivering copy machine feeding out another image which will bump you into yet another place; intuitively senses the cut and paste of alteration and re-assembly that will shift your perceptions once again just a little further down the line. You intuitively respond to the handiwork that outlines a cloud or hatches into a spiky pine bough like a trailblazing marker; intuitively know the fatal click and flash of the galvanizing camera.

The Hand that Guides Surprise

Despite the opening night crowd, you’re strangely alone and isolated in Lorna Bierber’s Region of Unease. The hand that you now sense steadily, audibly moving in the snow field ahead of you, ever clipping, altering, duplicating, regenerating – actually managed to sever you from your preoccupations and preconceptions early in this journey. She disengaged you from your “I,” and thereby freed the “eye” to waywardly wander in “Where?,” rather than “I,” “My,” or “Why?” If you came to viewing to be surprised by visual works; to be surprised by the routes you take – or better – stumble on, to get beyond yourself; to be surprised by what you never expected to find once you get to that ever-transitory “There” – then you probably know that genuine surprise is in short supply right now, and that spectacle and sensation are the plentiful, but poor substitutes that abound. It must be exhilarating to make these images – and it’s likewise exhilarating to encounter them at a time when so much work seems to be produced to be read about after the fact – even when you’re in its presence. And it’s particularly generous of Lorna Bieber share this adventure with us – to know how to take us with her into this discordant yet satisfying Region – and equally generous of Grimaldis Gallery to introduce this original, surprising artist to Baltimore.