A Studio Visit with Tim Scofield by Matthew Kern

Maryland Traditions and Folklore reception at the [...]

A Studio Visit with Tim Scofield by Matthew Kern 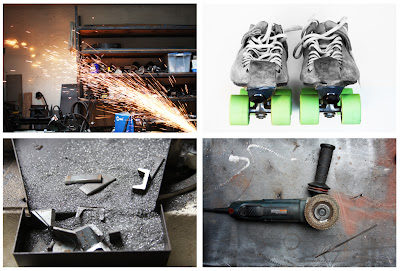 The Amalgam of Intuition, Invention and Mediums: A studio visit with Tim Scofield by Matthew Kern.


Tim Scofield told me once he had an idea for going out on Halloween as “Clean Guy”. Essentially he would shower and put on clean clothes. Seemingly simple but I am sure people would recognize the drastic difference and he probably would look like as he was in costume. Sco is knowledgeable and works in a mess of mediums, metal being his number one, so he is pretty much always a bit scuffed up. Check the hands. But let me back up.

Tim was born in 1970 in Freeport Illinois.  As a teenager, with his size and strength, was not interested in standard athletics choosing to be a punk skater, BMX kid. Ranked in the latter at one point, this was before these activities were even considered sports.  Working on and fixing the bikes and having an artistic inclination, started at a junior college studying theater.  Soon after, moving into school at Dekalb for 3 years as an undergrad, he studied sculpture, mostly wood, and started taking welding classes.  The combination of these studies and skills, including doing stage work, “building shit”, wound him up in Syracuse at the School of Visual Performing Arts, where he earned his MFA.  Studying in school with Roger Mack, and outside of school with dancer Lawson Smith, and having the omnipresent influence of Gene Kelly and Buster Keaton, Scofield began creating, building, and continued to create after moving to Baltimore 11 years ago, pieces with freedom of physical movement.  Basically, big toys.

Don’t be misled. The Swivel Bike, the Teeter Totter, the Flying Machines, TheTower, and one recently performed at the 3rd Annual Aerial Festival called The Weeble Wobble, are weighty, metaphorically and literally.  Performing on these works takes balance, prowess and physique. Initial inspiration and schematics, adroitness, physical strength and the avidity to have fun are all realized in these works.  The amusement and mirth, but also the seriousness, of a clown.

Since being in Baltimore, Tim Scofield was a tech. and taught sculpture at MICA for 8 years.  Has shown his work and performed 3 times at Artscape.  Performed with his art pieces at Virgin Fest  3 years in a row.  Built bicycles.  Built a motorcycle. Has designed and made jewelry and cutlery knives.  Makes props for Flying Dog commercials. Has made, customized and installed more metal railings, security windows, and bike racks for the residents of this city, public and private, than is even countable.  Refers to his hands as “Meat Paws”.  Is one of the founders and rolled for 3 years in mens roller derby with Harm City Homicide as “Sex Ed”. Fabricated and worked with John Waters.  Collaborated and worked with Sculptor Rodney Carrol.  Is soon to be married………
………..And oh.  He also raises bonsai trees and bakes bread.