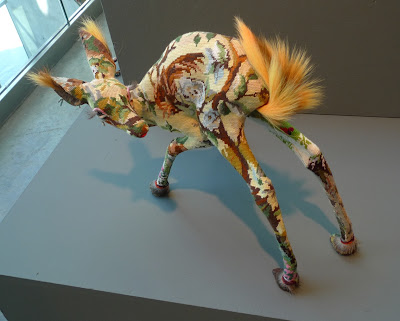 This exhibit, up in MICA’s Brown center through November 9 is AMAZING! However, this show should not be exhibited in the Brown Center. The only reason I came across it was because I was working in the building.

Although it is cool to look up and see animals jumping overhead, this building is way too busy and the animals get lost in its detail. It is a bit like architectural camouflage and this work is too good! It deserves white walls. Aside from this meager complaint, I found Fall/Fail, an exhibit by Parisian couple Frédérique Morrel and Aaron Levin to be one of the most satisfying I have recently seen. This work is  exquisitely crafted, cute without being saccharine, whimsical, humorous, gorgeous, and also deadly serious. Just when I thought I was completely over taxidermy art, this work saves it.

From the official MICA Press release: MICA presents Fall/Fail, an exhibition by Parisian couple Frédérique Morrel and Aaron Levin inspired by “the recent string of global catastrophes that give a sense of imminent doom,” Levin said.

According to MICA, this exhibit is “an evocation of possible global collapse and catastrophy.” Huh? Really? Because a few of the animals are tumbling around and, possibly, depicted in mid-fall? According to the artists, they are questioning, “Will the exhibition be a final fall or a new flight? Will a better world emerge from this ‘collapstrophe?'”

Um. Maybe something was lost in the translation from the French, because this doesn’t seem particularly accurate to the riot of kitchy pattern, luscious textures, and elegant, decorative forms I observed. To me, these works are celebratory, brash, fantastical, and unapologetically so. That’s what I like about them.

Read more below about the couple that made this work and see if it makes more sense to you.

Frederique Morrel, founded by Morrel and Levin, is an artistic adventure designed to explore the realms of humanity’s origins: Adam and Eve, the animals of the Garden of Eden and paradise lost, using as raw material discarded vintage tapestries found in yard sales and thrift shops. Believing the natural connection humans once had with “true” art and the natural access to beauty has been lost to industry, the couple’s “artifacts” serve as their solution to “re-enchant the world” through their special ingredients to create happiness.

The couple, who met in the ’80s while crashing a conceptual exhibition by Jean-Pierre Raynaud at the Musée d’Art Moderne in Paris in what today could be considered a “flash mob,” seeks out rare, missing pieces, believing that every find has a direct link to the energy and creativity of their ancestors. The use of these ancestral creations allows the artists to maintain an emotional connection to the past while making them more meaningfully powerful.

Morrel, a Paris native, has been a professor of fashion art and design at Ecole Supérieure d’Arts Appliqués Duperré since 1983. In 1990, she became active as a designer of decorative objects, and starting in 2002, this evolved into a full-fledged artistic career, exploring the boundaries that overlap between art, design and craft, with growing international success. Levin, a Baltimore native, boasts a 25-year career as a creative director in corporate identity in leading design agencies before continuing the same position independently, partners with Morrel to develop her artistic activity.