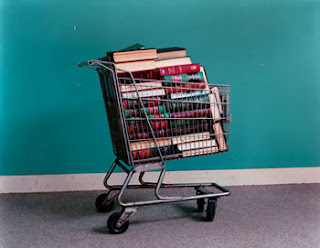 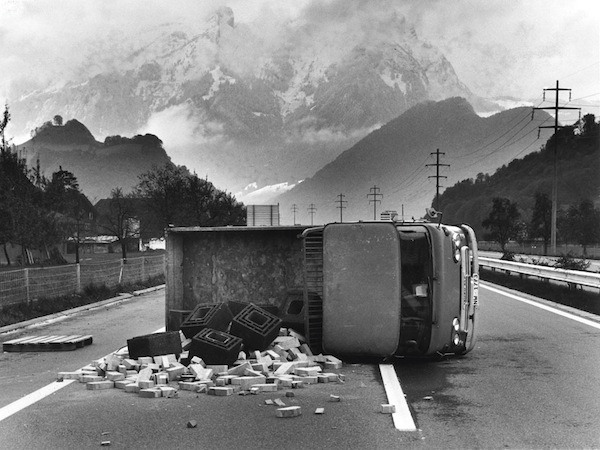 Burning Bright at the Hirshhorn 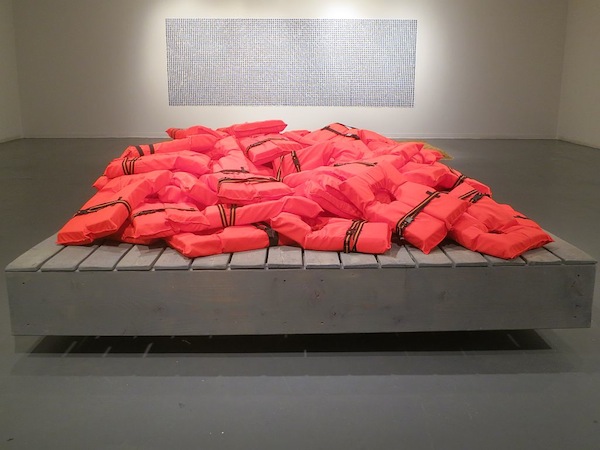 On opening night, the Main Gallery at Creative Alliance couldn’t have been more activated. The walls and floors, the ceiling, the lighting, and the video projections all come together to create a cohesive buzz in Laura Amussen’s solo exhibit, AFLOAT. The experiential works in the show transport the viewer into an experience of water, weightlessness, and a steady feeling of calm. The exhibit includes photographs, video, installation, 3-dimensional works on canvas, and a powerful performance piece titled BRINK, that lasted 75 minutes during the opening reception.

In BRINK, Amussen and another woman, Jes Contro, stood completely still for 75 minutes, while gallery visitors walked around them. They stood side by side, completely nude except for bright orange swim caps and blue goggles, on top of a large bed of sand installed on the gallery floor. Holding hands, with their backs to the crowd, Amussen and Contro, who are lovers, stared intently into the imagined distance created by VAST, a modular wall installation. For anyone who has ever modeled for an art class or attempted to stand still for any length of time, you understand that the act of standing completely still for 75 minutes is a difficult feat requiring stamina and concentration. The crowd in the gallery was highly aware of this: although they could pass in front of the couple, in a narrow space of about four or five feet, very few did. Amussen and Contro managed to stand as a stoic unit in the performance, while also presenting their vulnerability to one another, to the vast depiction of nature they stared into, and to the audience who milled around them.

What remained in the gallery after the performance were side-by-side footprints in the sand and the wall installation made of nearly 6,000 aluminum-rimmed circles, each filled with an image of water. It comes off like a giant puzzle of circular vignettes, where each image hangs loosely on a nail and slight breezes create a moving and shimmering effect. At a distance, VAST is a wall of water that alludes to glints of sun reflecting off the surface of an ocean, while at the same time, is a highly formal construction. Working in tandem, the 16-foot rectangle on the wall and DRYLAND, the 15-foot rectangle of sand create a powerful monument to natural forces and the way humans abstract and internalize their meaning.

The opposing walls are filled with small rectangles of various kinds. On the right are a grid of fourteen underwater photographs of Amussen swimming naked in a bright blue pool. To the left are a series of seventy-five small, rectangular canvasses that are wrapped with fishing nets and filled with driftwood that accumulates in density across the wall, ending with rectangles that are completely obscured by the wrapped netting. In the center of the room AFLOAT is a square floating dock, brought into the gallery and piled high with 75 bright orange life jackets. And at the entrance to the room, the installation TANDEM/ANCHOR reflects the rectangular structures at the far end of the gallery. The piece is a rectangular bed of salt formed on the floor with two connected life jackets suspended over it, about five feet in the air, tethered to a small anchor in the salt. A video projects from the ceiling to give a reflection of water on the salt. It’s as if we are standing on the idea of the bottom of the ocean, and the two life jackets overhead reference two individuals floating together as one.

Throughout  AFLOAT, Amussen is most successful through the structures of formality. She employs specific, numerical parameters for each piece that create cohesion, but her use of found materials for formal and personal reasons evokes a surprising vulnerability. Works in this show conjure up contrasting feelings: of being momentarily lost and then found, of struggle and calm surrender, of emotional weight that transforms into stability and strength. A limited color palette of orange and blue pops next to the natural elements of sand, salt, driftwood and rust, like a reminder of human presence in the natural world.

Amussen’s metaphor of ‘staying afloat’ is a common contemporary idea, a struggle that most of us can relate to. At times in our lives, we are all weighed down with responsibilities, burdens, emotions, and conflict. Through natural and metaphorical means, and through her own physical nakedness in many of the works, Amussen dissects and explores her own personal struggle for balance in this exhibit, both from a distance and in a highly personal way. Through it all, there is a sense of a journey completed, a calm oasis newly found. In all of the works in AFLOAT, whether literally or symbolically, Amussen celebrates her own discovery of an anchor or a life preserver in a partner.

AFLOAT is on view at the Creative Alliance through November 23, 2013. Gallery hours are Tue-Sat, 11am-7pm.

* Author Joan Cox is a Baltimore-based painter and a graduate of the MFA program at MassArts.