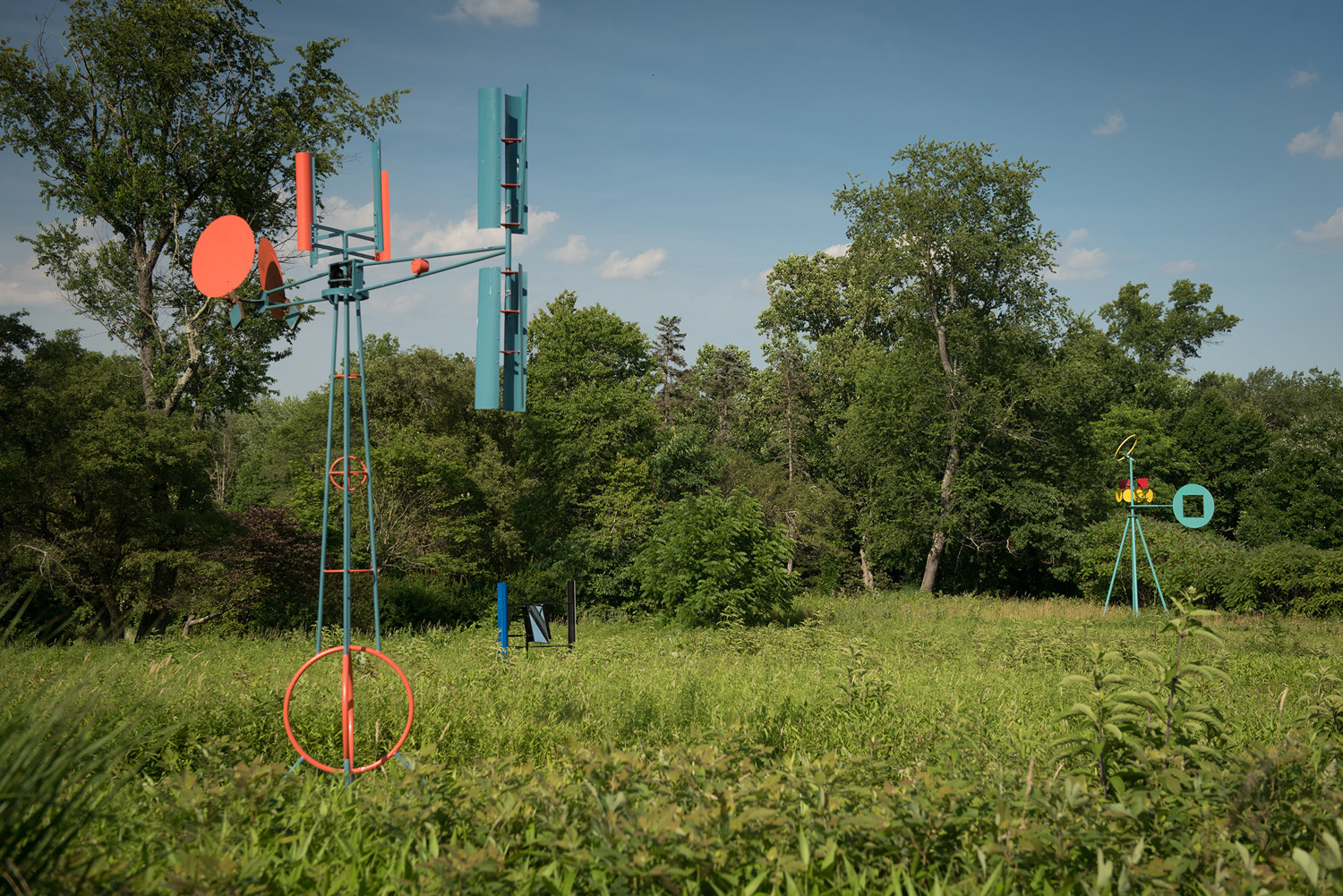 The Alchemy of Movement: The Sculpture of Paul Daniel 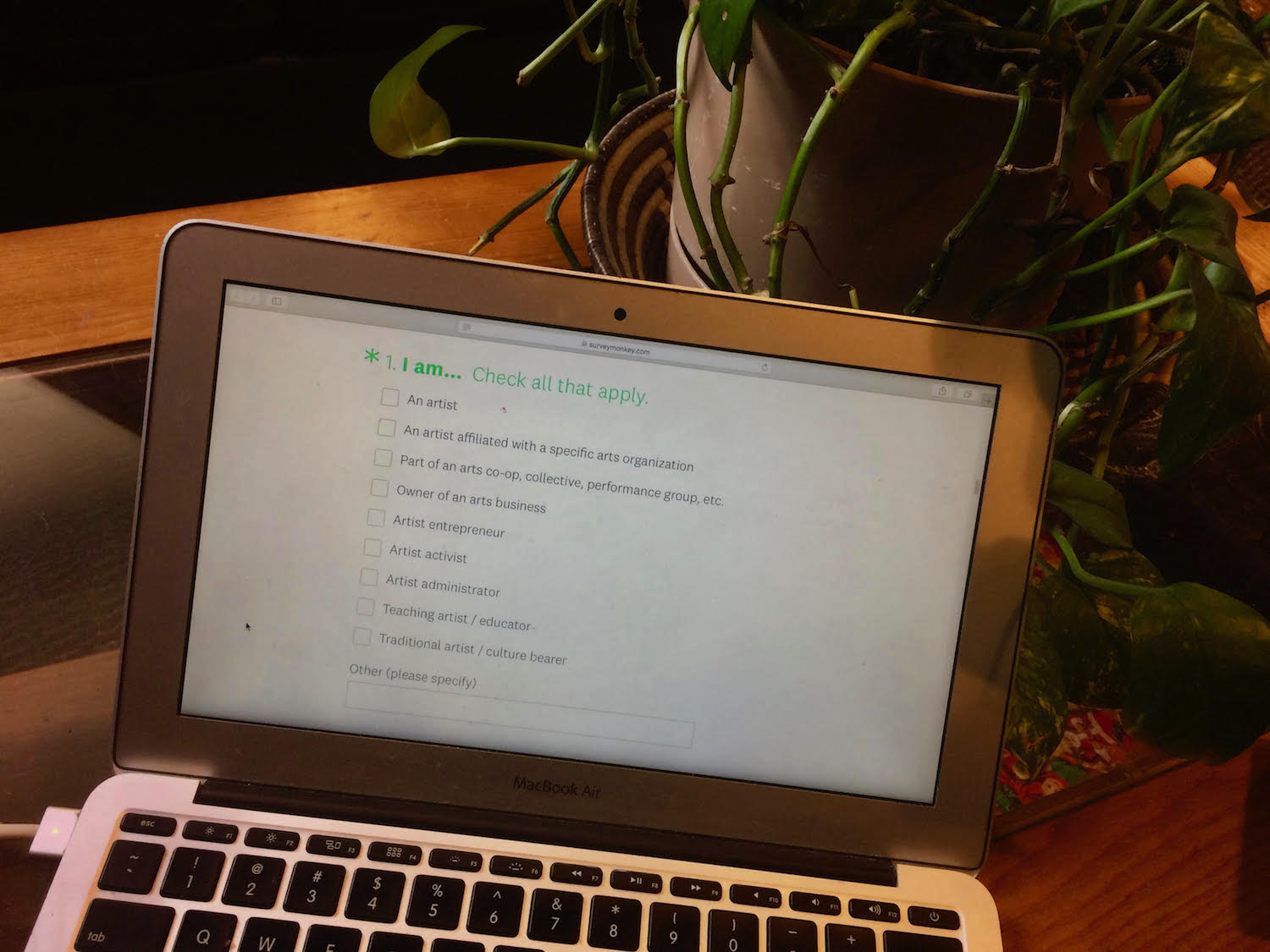 How Do Artists Survive and Thrive? 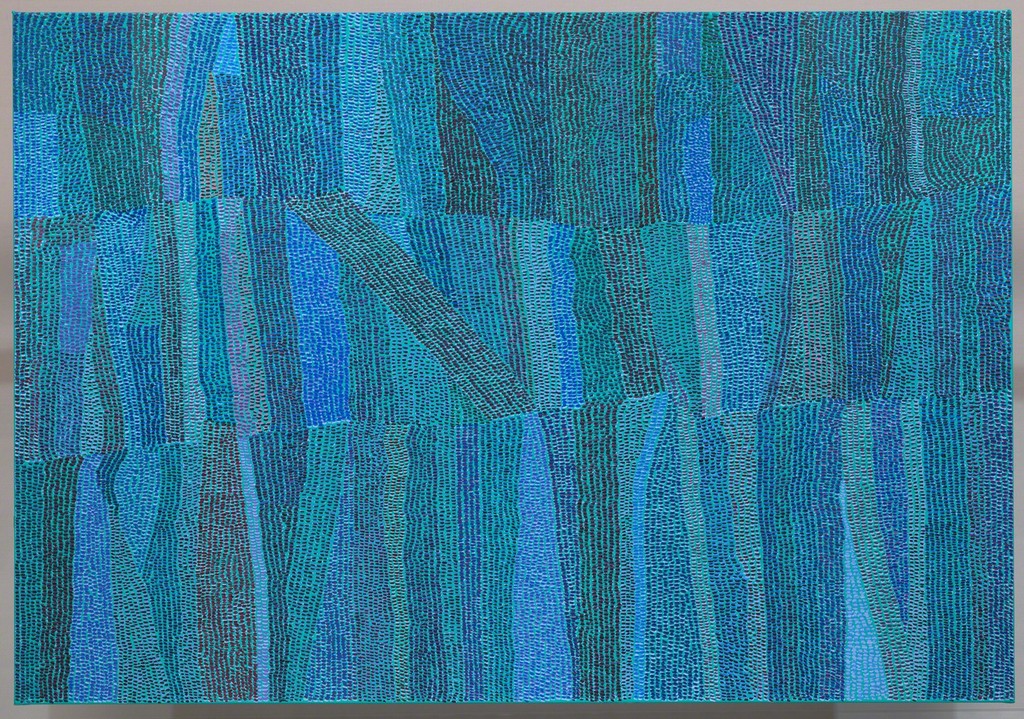 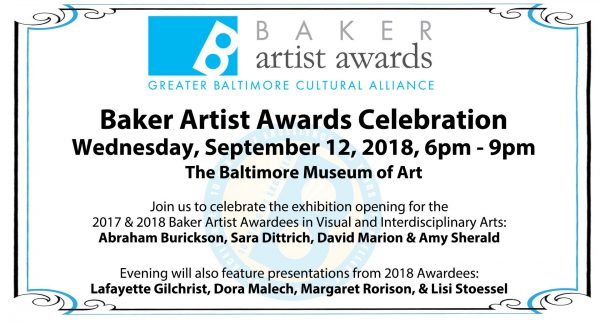 You are invited to a
Baker Artist Awards Celebration

This event is free and open to the public.
Exhibition on display through October 14, 2018

The Institute of Visionary History and the Archives of the Deep Now
Opening Thursday, September 13th – September 30th

Discovered in the basement beneath The Peale Center, the Archives of the Deep Now are the records of a centuries-old secret society calling themselves The Institute of Visionary History. The Institute believed the building to be a kind of “thin place” where one can more easily transcend our present reality and contact other planes, places, and times. Their experiments combined scientific inquiry and visionary sight to uncover histories heretofore untold.

As Submersive Productions recreates the Archives of the Deep Now, we have come to see the room as a kind of machine designed to evoke a specific state of mind. Each archive box contains an experiment, a set of mysterious instructions devised to expand the present moment to better access other lost moments in time. These experiments, while fascinating, have so far proven unsuccessful. Perhaps you, as our guest researcher, will have better luck.

We will be unveiling new episodes in September, October, and November of 2018. We will begin with guided experiences as we discover together the mysterious forces at work in the room. Later in the Fall, guests will have the opportunity to explore and choose their own experiments from The Archive. We will be selling tickets a few weeks at a time, and unveiling new episodes as we gather and incorporate data from our guests. 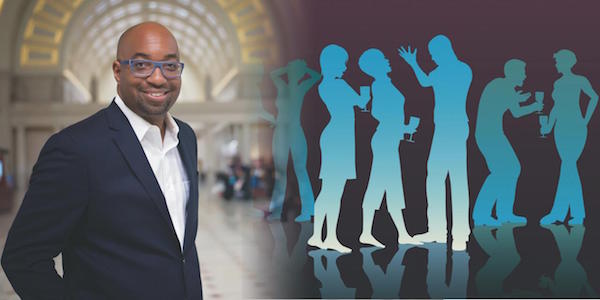 CityLit Project is pleased to announce a special event to honor poet, educator and New York Times bestselling children’s author Kwame Alexander with the Dambach Award for Service to the Literary Arts. Alexander will receive the award at CityLit SWING on Thursday, September 13, 2018, from 6:30 to 8:30 p.m. at the Motor House, 120 W. North Avenue in Baltimore. The evening fundraiser will feature lite fare, jazz and entertainment, including a reading by Alexander. Tickets are available to the public on a sliding scale, from $15 to $100, and can be purchased through Eventbrite.

Six years ago, the 2018 NEA Read Across America Ambassador Kwame Alexander struggled to convince twenty-two publishers to take a chance on his novel in verse, “The Crossover,” about twin brothers who starred on their junior high school basketball team. The belief was girls weren’t interested in basketball and boys held no interest in verse. When Houghton Mifflin Harcourt published the book, it became an instant success winning Alexander the Newbery Medal for the Most Distinguished Contribution to American Literature for Children. The New York Times called this work, a “beautifully measured novel of life and lines.” Now the author of over 28 books, including “Solo”and “Rebound,” and the forthcoming “Swing,” is called a visionary, spreading his love of literature around the world. A regular contributor to NPR’s Morning Edition, Kwame is the recipient of numerous prestigious awards, including The Coretta Scott King Author Honor and three NAACP Image Award Nominations.

“CityLit Swing is an opportunity to celebrate the growing literary arts scene in Baltimore,” says CityLit Project executive director Carla Du Pree. “It’s a privilege to fete Kwame in this way, but we also aim to create a new dynamic at the Motor House for poets and writers across the region. Anyone remotely engaged in the literary creative scene should be there.”

Alexander believes poetry can change the world, and he uses it to inspire and empower young people through The Write Thing, his K-12 Writing Workshop. He’s the host and producer of the literary variety/talk show, Bookish. He built the Barbara E. Alexander Memorial Library and Health Clinic, as a part of Leap for Ghana, an international literacy program he co-founded. Poised to have an even larger impact this spring, he’ll have his own imprint at Houghton Mifflin Harcourt Books for Young Readers, called Versify, for risky, unconventional books. The extraordinary trailblazer Alexander follows Enoch Pratt Library’s Judy Cooper, the 2017 recipient of this award. 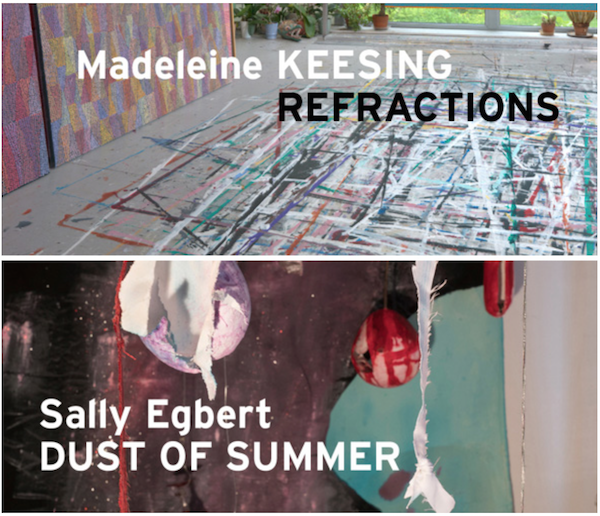 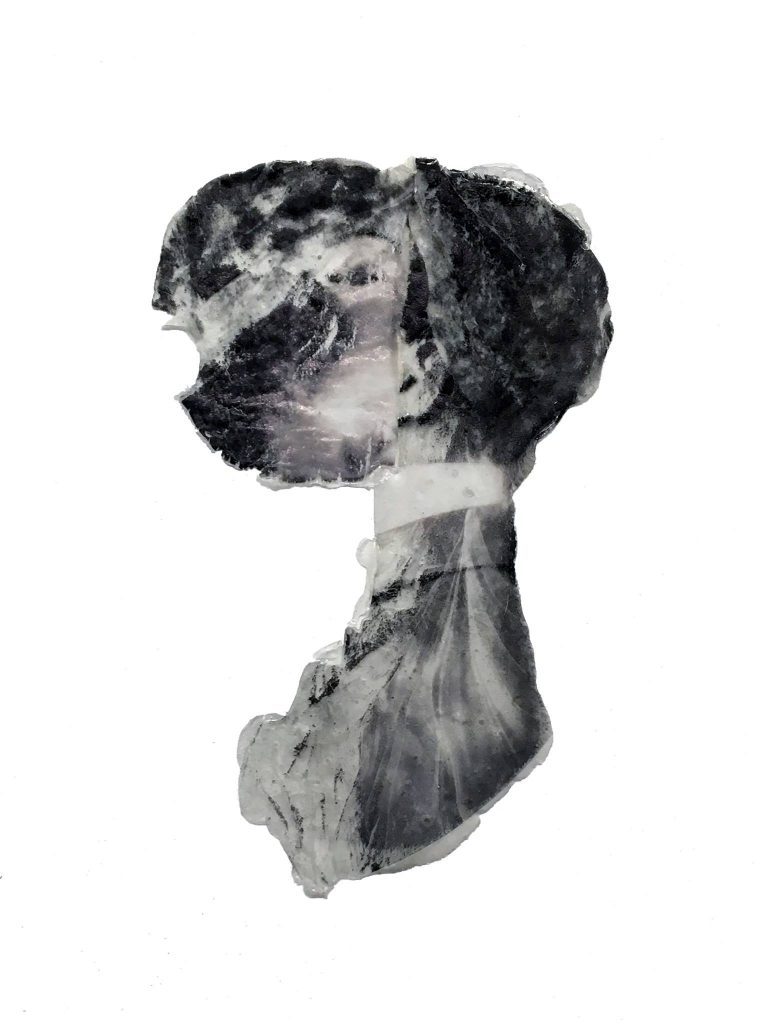 Antonio McAfee leads a tour and discussion about his ICA project, Theme and Variation.

Theme and Variation is an exhibition of photographic collages that are based on re-imagining studio portraits of middle class African Americans from the Exhibition of American Negroes organized by W.E.B. Du Bois and Thomas Calloway for the 1900 Paris World Expo. This exhibit continues the visual transformation the figures have undergone for a number of years; in this phase subjects are transiting into abstract forms. Influenced by 19th century pseudo-sciences’ incorporation of photography, and R&B, Theme and Variation expands the artist’s work into abstract representations breaking down simple reads and understanding of the figures.

Antonio McAfee – AntonioMcAfee.net
Antonio McAfee is a photographer based in Baltimore, MD. He received his BFA in Fine Art Photography from the Corcoran College of Art and Design. Shortly after, he earned his MFA in Photography from the University of Pennsylvania. In 2011, he received a Post-Graduate Diploma in Art in Arts and Culture Management from the University of the Witwatersrand (Johannesburg, South Africa). His fascination with history, portraiture, and what makes up photographs drives his activities. McAfee has been featured in BmoreArt Magazine, The Washington Post, Washington City Paper, The Philadelphia Inquirer, Mission on Tenth published by California Institute of Integrated Studies, and catalogues published by the University of Pennsylvania and Corcoran College of Art and Design. He participated in residencies at Can Serrat (Spain) and Vermont Studio Center. Antonio was awarded the Maryland State Individual Artist Award, Civil Society Institute Fellowship, Fulbright IIE Grant to Johannesburg, South Africa, and Dedalus MFA Painting and Sculpture Fellowship. His work has been exhibited at the Academy Art Museum, University of Maryland College Park, George Washington University, Corcoran Gallery of Art, Civilian Art Projects, and Terrault Contemporary. Antonio is currently an instructor at American University.

ICA Baltimore – icabaltimore.org
ICA Baltimore is a collaboration of volunteers working to stage contemporary art exhibitions in available spaces in Baltimore. Antonio McAfee: Theme and Variation is the twenty-sixth exhibition by the ICA since 2011.

Resort is pleased to present:

Aurelia
The shell forms around the thing, concealing a formless matter.  It gives definition to something that exists between states, the public face of a gruesome, immobile limbo.  Shiny, purposeful, and strong; layered and calcified into an object all its own. Adjacent to the magic, the aurelia become artifacts of metamorphosis, clinging to their supports and catching the sun.

The four artists in Aurelia present work that investigates structure, support and layers as autonomous objects. Complex sculptural works combine a range of materials, processes, and references into free-standing and wall pieces that reflect a new reality of fractured content, streaming from multiple sources and sites.  Similar to global warming and pollution, these conditions seep into the makeup of matter, solidifying into a new and strange, hybridized cocoon- an outer armor, and protecting us from the impact of unforeseen forces. Hardening in the hopes of being prepared for what is yet to come…

Amy Stober makes work that combines painting and sculpture using clothing and accessories cast from molds in hard plastic and skin-like rubber.  Reenvisioned as flat, found form, these substrates are then decorated with patterns and graphic embellishments. In their totality, the works embody diaristic narratives and poetic references to clothing as an expression of individuality and projection of identity.

Sarah Tortora’s pieces, each part of her larger series titled “Witness Mark,” reflect the protection and preservation of objects and position this impulse against the idea of manufacturing and broader production. Her larger work spans forms that are hard edged, geometric, and monolithic to more hand-formed, biomorphic, and suggestive. Nostalgia and one’s personal relationship to time is juxtaposed with the larger spectrum of geology. Objects created from layers of material, hardening under pressure and tectonic movement preserve a universal history while individually, our own history becomes an an amalgamation of collection and production on a much more intimate scale.  Tortora’s small resin pieces read as part specimen, part gazing ball, an intermingling of nostalgia and potential.

“Twins caused anxiety for both ancient and pre-modern societies and were often explained through polarities of wonder or horror.  They became the bearers of dichotomous creation, as well as instillers of ambiguity, and the guardians of fragile humans, as if they were extra-ordinary.  Perhaps the most famous historical set of twins are Castor and Pollux, half-twin brothers of myth, immortalized in the constellation Gemini…” (Ajay Kurian)

Pooneh Maghazehe’s installation, Split Double Zero, is a single body of work divided between two locations.  Presented simultaneously at Resort in Baltimore and 17 Essex in New York City, the work in Split Double Zero exhibits a series of dichotomies through simultaneous doubling and dividing of twins – both in process of making the works and in their destined placement.

The  act of casting duplicates as a means to re-instate difference seems self defeating, inverted – a cross cancellation.  With no two things alike, but meant to be seen as pairs or as half of a whole, this inherent conflict reveals the shared edge between permanence and erasure. Not unlike the way in which they each became, the entire body of work is finally, also, split – this time physical by geography.  The singular thread that keeps these parts tethered, albeit momentarily, is that they were once one. 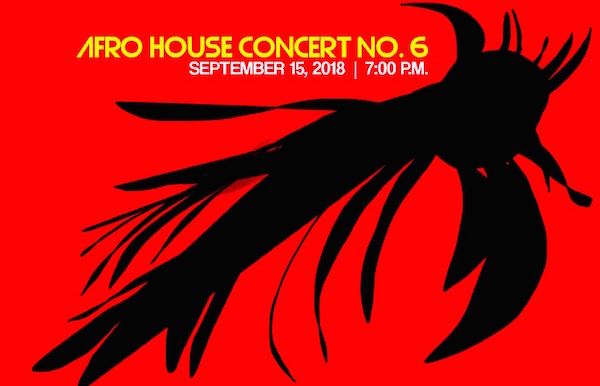 Imagine the rich earthy thump of an upright bass times three, paired with a baby grand piano, and you’ve got the makings of an experience that will have you soaring sky-high in one moment and plunging to the depths of the ocean in the next. The compositions played by the quartet will be a blend of classical, soul and rock music that is futuristic, emotive and luxuriant. This is the Afro House Sound, composed by pianist and composer, Scott Patterson.

The Baltimore-based Afro House Concert Series is a celebration of the city’s extraordinary maker scene. The series features composer and pianist Scott Patterson on piano, Afro House ensembles (including the Astronaut Symphony), special guests, and local food, beverage and tech makers. In September we will delight in wine crafted by local vineyards.

Your ticket includes a fabulous selection of complimentary wine. You will be provided with the location of the concert after you have purchased a ticket(s).