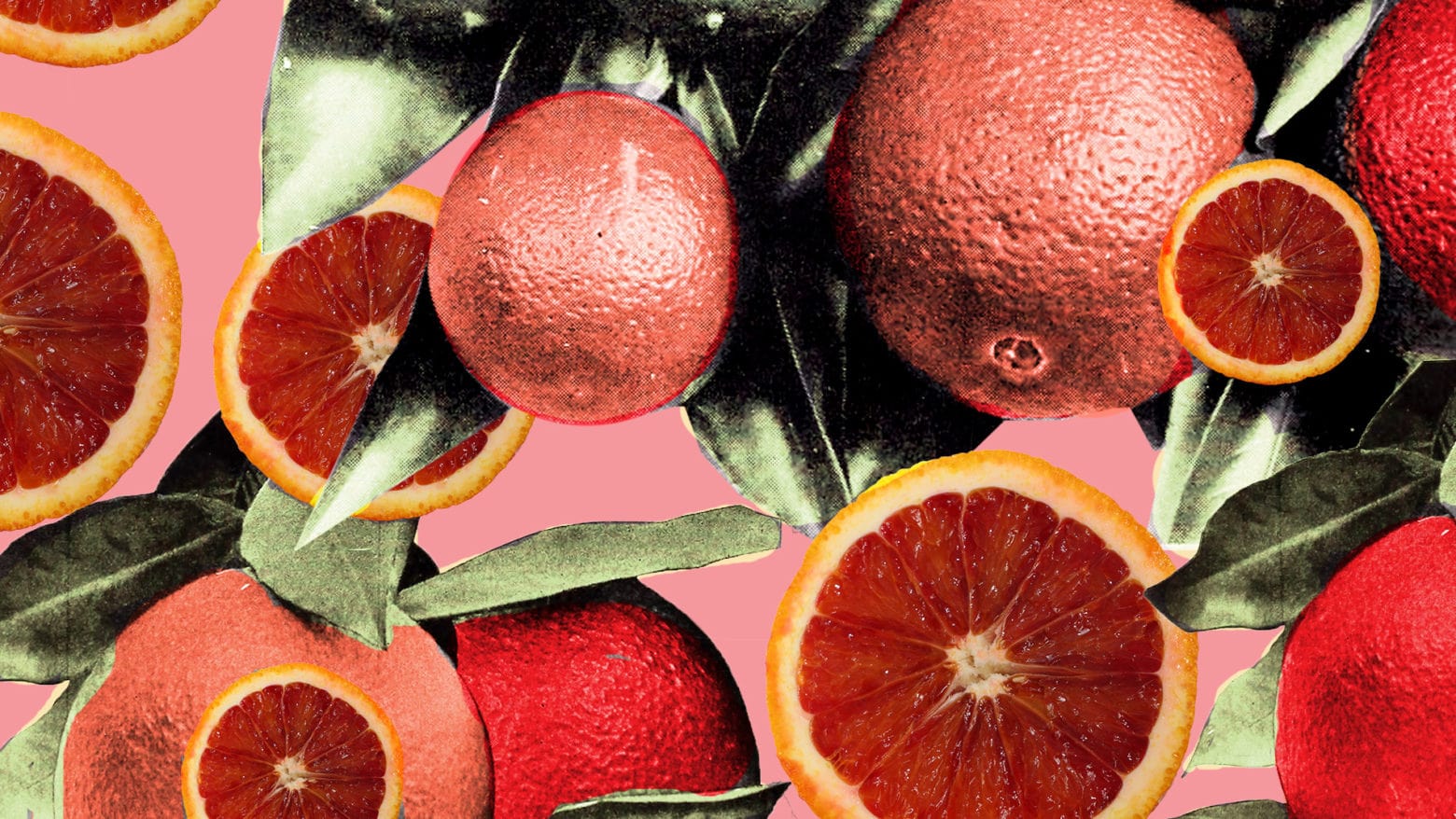 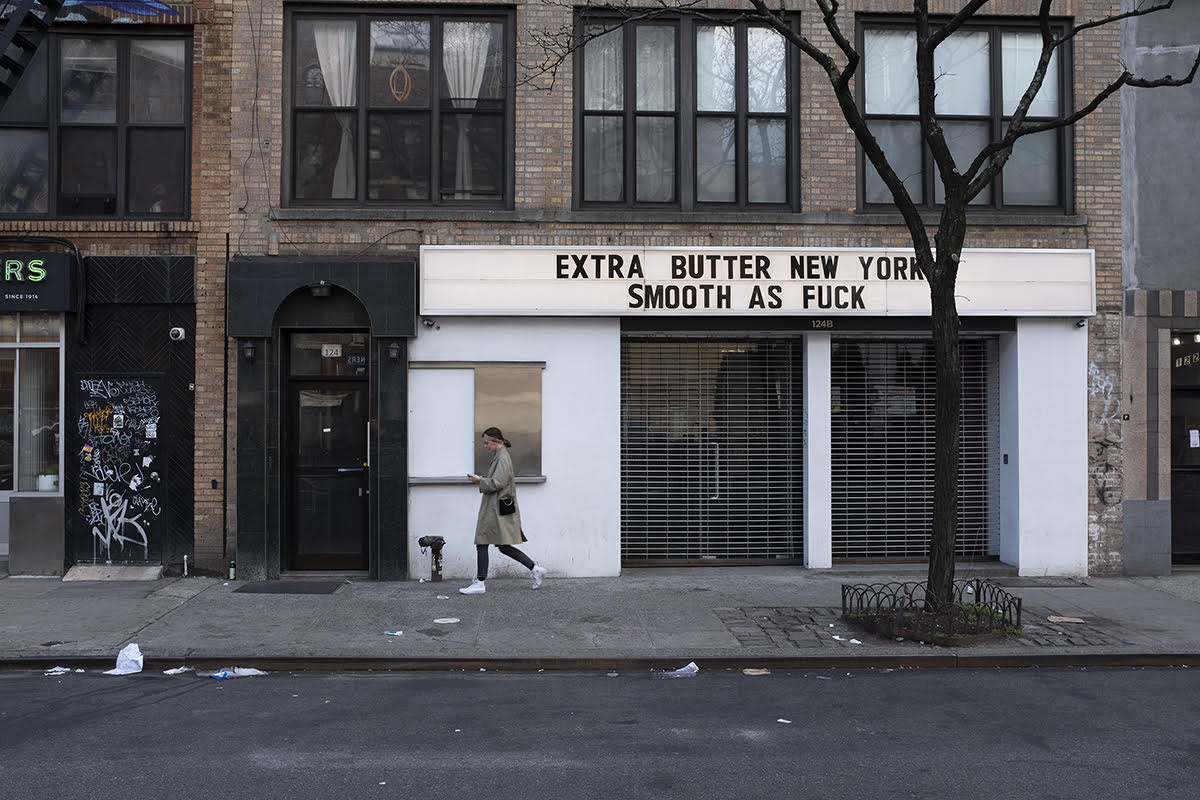 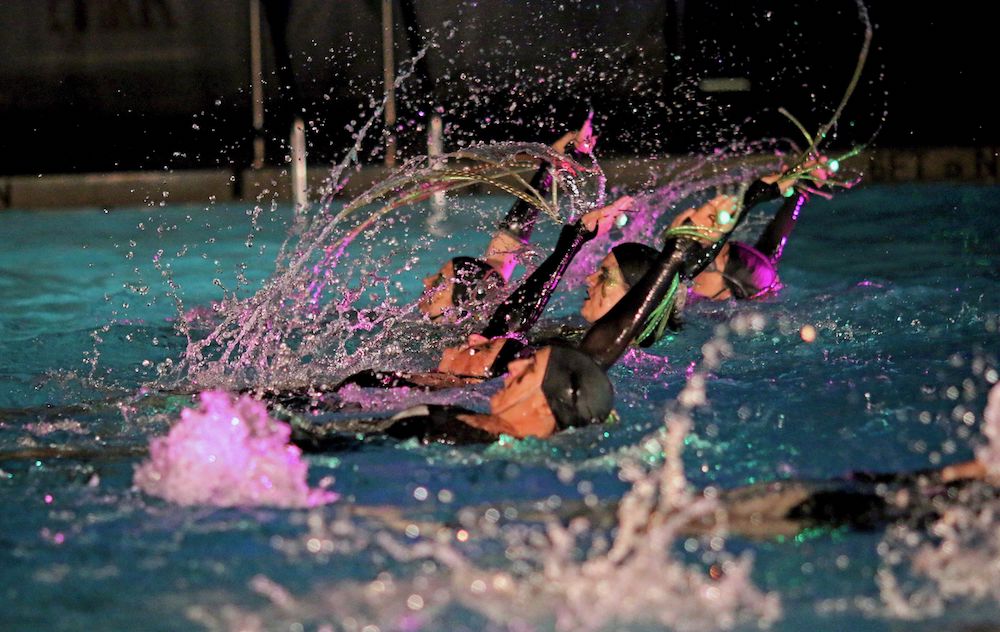 I moved to Baltimore to join Fluid Movement. In 2013, I saw Moby Dick: The Water Ballet performed at Druid Hill Park pool. It was the scene where the swimmers were all vegetables being cooked into soup that got me. It was threatening to rain and then the sky cracked open as the carrots were getting into the pool. My friends wanted to leave but I pulled them back down onto the soaked bleachers. I could not remember another time I had seen something so bizarrely captivating. I just knew I had to be a part of the performance: I felt drawn to it.

I read somewhere that the way to survive a break-up is to get a hobby. I read somewhere else that the way to meet people in a new city is to take up a new recreation. As a New York transplant fresh from dismantling my college relationship in the fall of 2014, I starting showing up for Fluid Movement’s public synchronized swimming weekly practices at Chick Webb Aquatic Center in Oldtown.

Fluid Movement is a moving target—it’s not just one thing. It’s a 100+ person performance art group. It’s a water ballet in the summer (with practices all year), but also a roller-skating show in the fall, and occasionally a flash mob-like dance performance in the winter. Now in its 20th year, Fluid Movement (or FM as we affectionately abbreviate it) has been around since before “collective” was a buzzword. Members have come and gone, but the mission remains the same: empower people to be themselves, make art, and forge new connections across the city.

Collaborating closely with Baltimore Aquatics and Parks and Recreation (which receives a portion of all ticket sales), we perform in the city’s public pools and parks and as cheaply as possible so as many people who can find the time to join us, can. It’s an opportunity for adults (and a few children) to return to a time when fun was a priority. 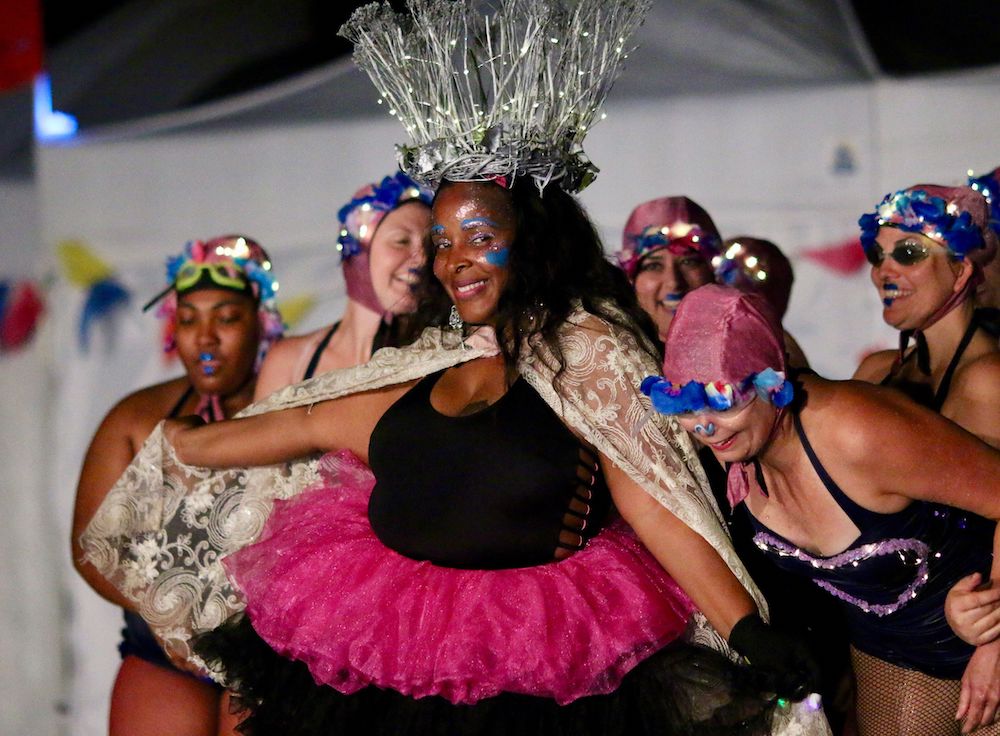 As current president and founding member Valarie Perez-Schere explains, most people join FM after attending a performance because it’s the kind of thing you really have to see to believe. “You don’t get it until you are with 500 fucking people looking at 100 people swimming in a public city pool,” she says. “It’s a visceral experience, looking at the joy, seeing all the body shapes, and having this ephemeral moment and having this one shared day. It’s situationist, this one elevated reality to get… twee.”

I met Perez-Schere on the pool deck at my first practice at Chick Webb. Wearing a one-piece swimsuit worn out at the butt with an assortment of tattoos tracing her arms and legs and a functionless swim cap that left almost all of her auburn hair hanging out of it and standing five-foot nothing to my five-eleven frame, I was immediately intimidated by her. Over the next hour and a half, she and the other members of FM led me through some of the basics of synchronized swimming: egg beatering (treading water but more efficient), sculling (gliding across the water’s surface beautifully), and tubbing (sitting up in the water with your legs on the surface as if you are in a bathtub that is too small for you). I loved it immediately. It was so hard, I didn’t think I was any good at it, but for the last three years I’ve been helping to lead weekly practices, which is a testament that this method of passing on knowledge really works.

On the performances, Perez-Schere explains, “We’re just one little moment in time, we’re one little place in time. And then we’re gone. We roll in, set up, and then shut it down and we’re gone except for the glitter. We’re like the goddamn old-time circus, nobody does that shit anymore in urban space.” Having now participated in four water ballets, this feels accurate. After months of rehearsals, there is a tech week, nine performances, and then the whole absurd thing is over except for the glitter in my car, shower, bed, and house for another year.

On a Wednesday night in April, I interviewed Barbara Wilgus in the locker room of Cherry Hill Aquatic Center while changing into my swimsuit. Long time swimmer, board member, and one of this summer’s water ballet producers, Wilgus also joined FM while recovering from a trauma. In 2009 she had broken her arm and after the cast came off “it was the first time I looked at my own body and felt betrayed and scared because I can break. I swore to myself I was going to do whatever it took to get strong and be comfortable with my body and do things with it.”

Veteran swimmer Eva Farrell believes that FM has found a way to use the body in radically unique way, by making body differences utterly unremarkable. “We use them creatively and inclusively in a way that few other things do,” she says. “As somebody with an alternative body type—as a fat woman—I’ve found this to be an incredibly freeing experience. It has been really important in my life and part of my physiological development, learning to love myself.”

It’s a sentiment Perez-Schere echoes. “FM facilitates community for weirdos and for people who can’t catch a fucking ball, like me,” she says “People who hate competition. Who want something different. Who want an arts experience and this performance adds a whole other level of risk and glory and challenge.” It’s physical and taxing exercise cloaked in outrageous farce. 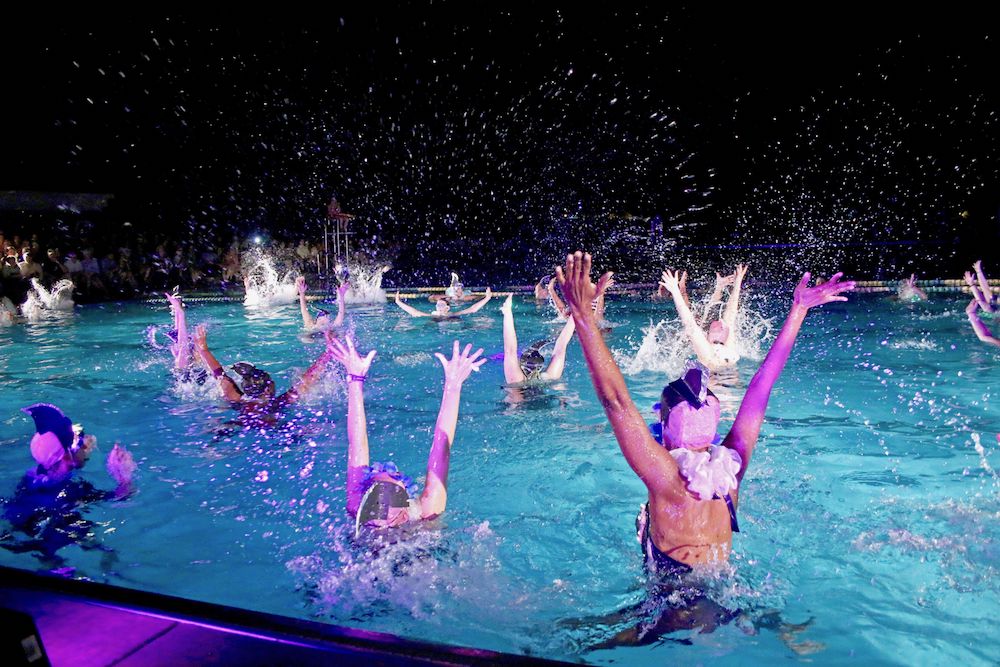 This summer’s show, Fluid Movement: The Water Ballet, is a variety show celebrating 20 years of the nonprofit but also “piecing together the different things that go into making a show,” Wilgus says. “There is the skillful scene, a scene showing the fun, one of the drama and the narrative, and that one scene that makes you scratch your head.” I usually tell people it’s The Muppet Show with fewer puppets, the same amount of cross-dressing and more swimming. In the past four years I’ve been a devil climbing out of a Hellmouth, a piece of garbage in the Inner Harbor, a Shakespearean lover, and Grace Kelly in Rear Window. Other friends have been bugs, potatoes, dinosaurs—the list is endless.

“At the end of this, when you’ve stood there in your goddamn bathing suit with 100 new friends and made a weird ass of yourself and yet looked beautiful and amazing and done something unbelievable and kind of impossible nine times, it’s transgressive and life-changing,” Perez-Schere says. “I am consistently told that, and this is why we’ve stayed for twenty years.”

It’s certainly been life changing for me. FM has introduced me to some of the most important people in my life, including my fiancé, who I met on the deck of Riverside Park pool the first day of summer rehearsals. He proposed to me three years later on the deck of Patterson Park pool after a show in front of our audience of 500 people and our 100 friends. As fleeting as performance is, the lasting impact of collaboration can shape a life. 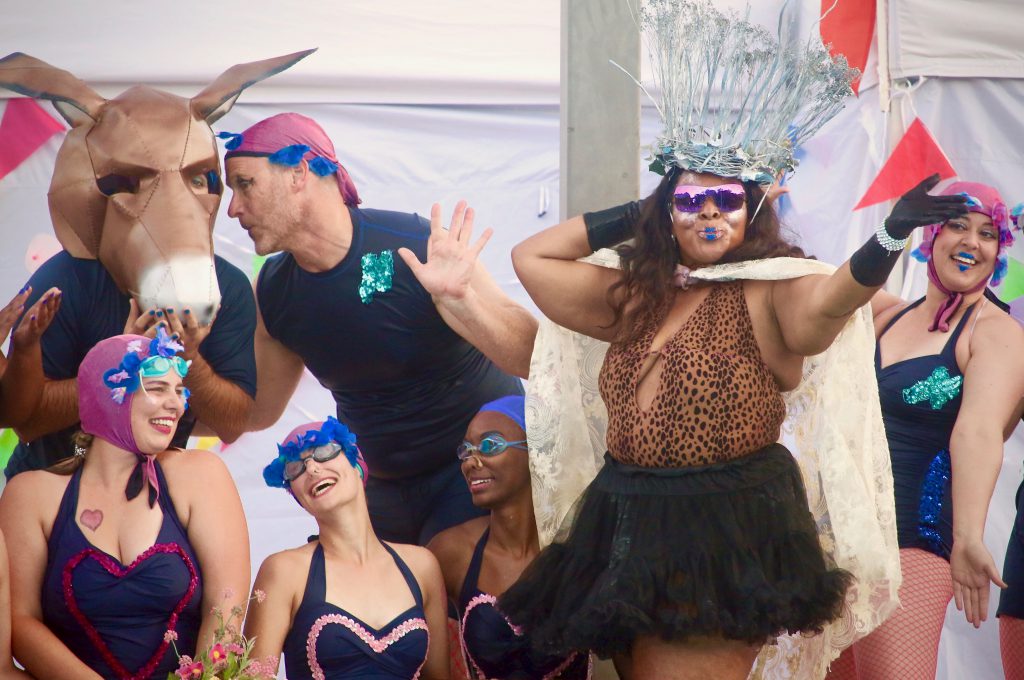 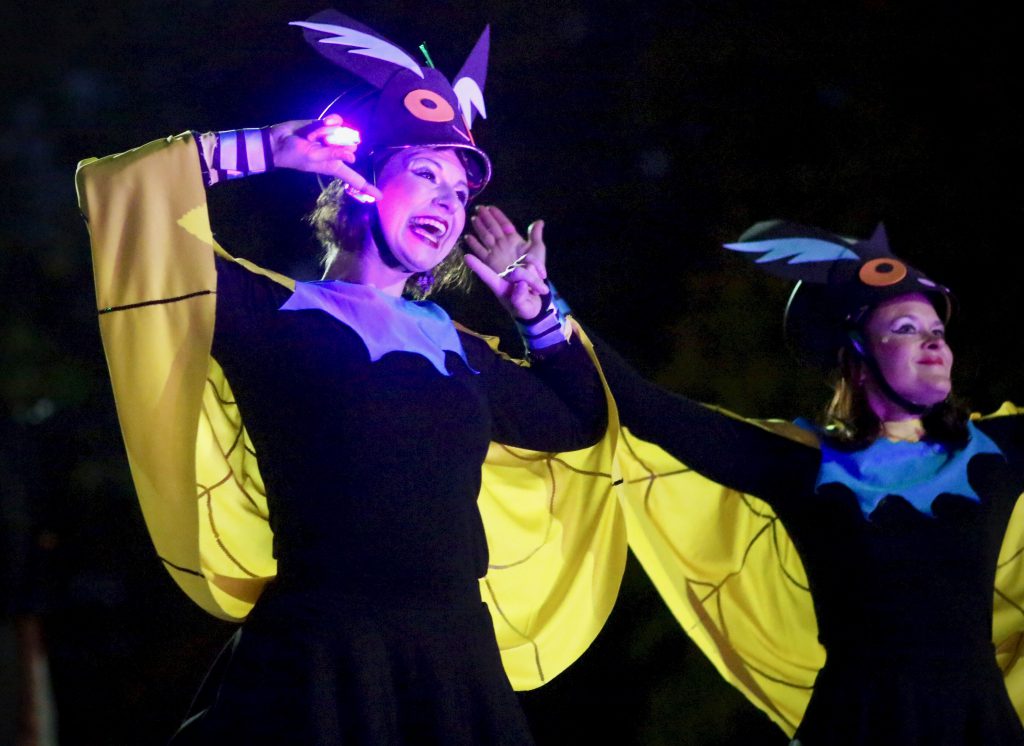 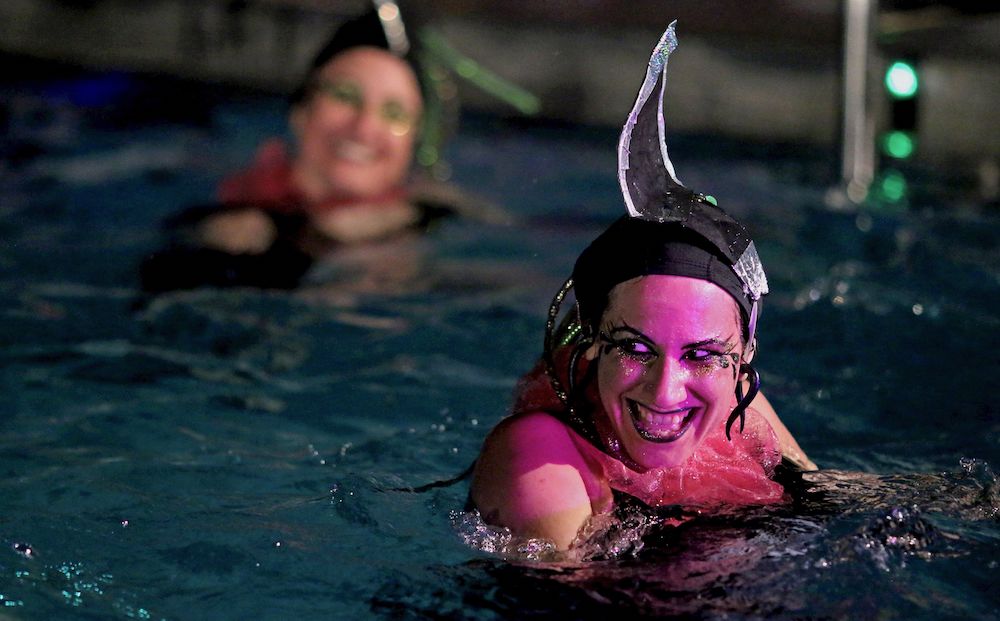 Photos by Vincent Vizachero and courtesy of Fluid Movement.