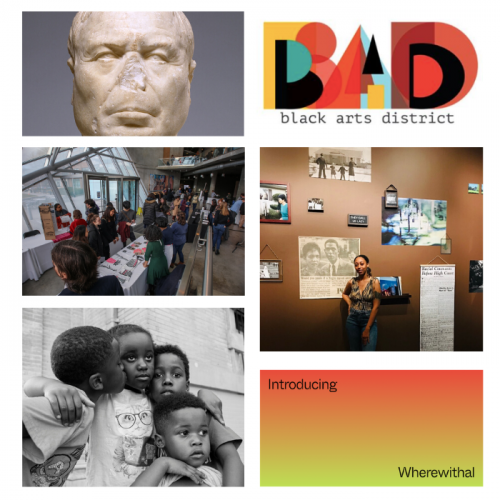 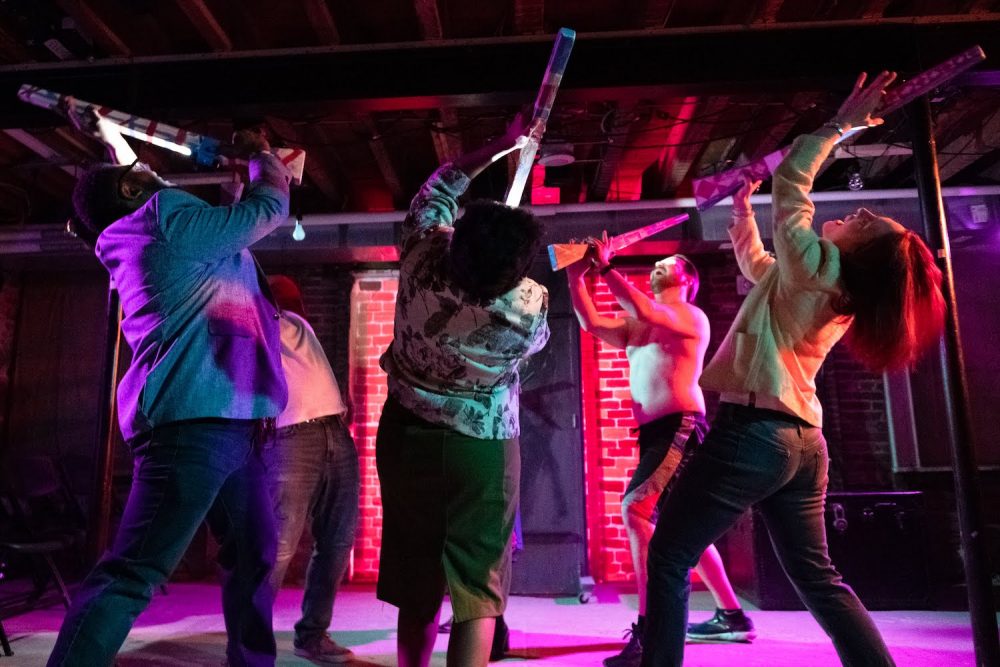 A friend from New York, upon seeing blocks and blocks of boarded-up Baltimore for the first time, once said, “Wow. Your city is kinda like a haunted house… except there are whole haunted neighborhoods! Living here must be really creepy!”

I was thinking about that comment on the eerily empty nighttime walk to Clifton Mansion to see Safe Space, the crushingly dark comedy written by R. Eric Thomas and produced by Single Carrot Theatre, which runs through February 23. At the time, I didn’t even know that I was on my way to see a ghost story precisely about a hyper-local species of haunted house. I was only thinking about how strange, elusive, and relative the concept of a “Safe Space” is in Baltimore. I had just gotten back to town after nearly two months in Scandinavia, and found myself a bit unsettled by the process of easing back into the muscle memory of Baltimore—of glancing over my shoulder, of changing my posture to feel less visible as the sole person on empty blocks, of resigning myself to our reality of cracked sidewalks and out-of-service streetlights that might dead-end in a grass field without warning.

And so, on many levels, Single Carrot Theatre’s production feels a brand of site specificity that hits uncomfortably close to home. It is an absurd ghost story performed in the creepy basement of a weird mansion in a forgotten golf course in a neighborhood with plenty of haunted houses. Audience members wait on the first floor of the dilapidated house before being ushered down. By the stairwell, there’s a Baltimore Sun article from 1995 about how President Clinton’s AmeriCorps youth service program was going to restore the 1802 mansion, which was built as a home for Johns Hopkins (of university fame) and later served as a clubhouse for the golf course. One gets the impression that renovation project never quite finished. All in all, it’s a context that speaks to Ye Olde White Baltimore—Hopkins! Harford Road! Foundations! Golf Clubhouse!—or, more specifically, its spectacular decline. Single Carrot Theatre, now fully itinerant and devoted to site-specific works, probably couldn’t have found a better setting to pair with this particular script within the borders of Baltimore City.

The story opens, conveniently, in a creepy basement, an arrangement requiring very little suspension of disbelief for the audience and very little (I would imagine) intervention in terms of set design on the production end of things. What is surprising is the effectiveness of said suspension of disbelief’s inertia—carrying us through other scenes and settings without changing much of the minimal set. We don’t need to be shown an anonymous office interior to understand that the characters are in an office. But superimposing this reality onto the “horror” of the unfinished basement works brilliantly for the play’s rapid, irreverent tonal shifts. Director Ben Kleymeyer has managed a show that feels familiarly cinematic but that also could only exist this memorably as a live theater experience. I noticed a physical discomfort in my back from rapidly shifting between belly laughs and tensing up at awkward moments.

Spoiler alert: it’s nearly impossible to discuss Safe Space without ruining a bit of the fun of seeing the ghost story for the first time.

In his inaugural play, writer R. Eric Thomas has stuck firmly to the rule of “show, don’t tell” to great effect. Most scenes begin with a surreal, emotionally charged, sometimes screamed soliloquy that establishes an oft-incongruous, tense mood for the witty dialogue that follows rather than any narrative scene-setting.

We as viewers have to connect the dots a bit as the story unfolds—Who are these people? What is their relationship? Why is it so damn awkward? It’s an engaging hook for the audience that fits nicely with the farcical Clue-inspired supernatural whodunnit that follows in the second half of the one-act play.

The cast mainly comprises the staff of People Power, a fictional Baltimore nonprofit that aims to connect disadvantaged city residents with employment opportunities. The financially struggling organization is helmed by Helen, a somewhat awkward Locust Point native played brilliantly by Alix Fenhagen. Helen has just inherited a home in the countryside outside the city—an estate her Black acquaintances refer to as “a plantation” and she exasperatedly refers to as “farmland.” There’s a mysterious locked room in the basement of said house, which again leads to one of many semantic sleights—Helen grows increasingly irritated as other characters continue to call it her “panic room.” Perhaps thanks to this Panic Room reference, I can’t help but think of Fenhagen’s Helen like a Jodie Foster character—she has that signature uncomfortable frigidity masking a complicated vulnerability. The Silence of the Lambs-esque basement does little to dissuade this association.

While Helen serves as the fundraising and political face of People Power, we get the impression that her African American coworker Charlotte, played by the formidable Tina Canady, seems to handle the actual mission of the organization. Charlotte is a shoulder-padded wall of carefully maintained professionalism. With an economy of restrained facial expressions and body language, Canady portrays the kind of businesswoman who’s made a career out of masking her irritation, no matter how justifiable it may be. It’s not hard to imagine that Charlotte long ago made a conscious effort to suppress any suggestion of the “Angry Black Woman” stereotype, and that emotional undertaking is slowly whittling away at her soul.

Nadeen, the office gossip played with impeccable comedic timing by Daniela Hernández-Fujigaki, likes to remind her coworkers that she is a woman of (unspecified) color and escalate conflict—in the name of resolving said conflict, of course. At one point, she gestures a-la-Ruby-Rhod to ward away Charlotte and her allegedly toxic energy, claiming she needs a sage smudge after every interaction.

And then there’s Bill, played mischievously by Aaron Hancock, who is the sole African American man (who also happens to be gay) in the office. He has recently been demoted from a client manager—who “didn’t seem to like the clients”—to office manager, a position that sees him pouring coffee and answering the phone. The optics of this arrangement and whether or not they’re preferable to the alternative of firing Bill altogether are one of many points of contention between the women in the office.

In the words of Nadeen, “Bill has a boyfriend! And his boyfriend is a queer Black locksmith?! Tell me more!” Said boyfriend, Courtney, at first appears to be the closest thing to a likeable character among the dysfunctional bunch. Actor Dominic Gladden plays Courtney as a somewhat hapless but wise-cracking figure who seems to get swept along into others’ schemes. He’s a passive catalyst for much of the story’s drama—his actions set off a series of escalating events, but they’re seldom of his own volition.

Helen has hired Courtney to unlock a mysterious door in the basement of the plantation house. It’s here that we meet Ryan, Helen’s embarrassing brother played by Matthew Shea. He’s an office park security guard who participates in alt-right chatrooms but swears he’s “not a racist” (nor a Nazi). Behind the mysterious door, there’s damning evidence that Ryan and Helen’s uncle was a gun-hoarding right-winger, as well as literal and figurative ghosts of their ancestors’ ownership of slaves.

I’ll try not to give away too much about the second character played by Tina Canady—whose range and ability to execute pinhead turns of tone prove ever more impressive as the play progresses. I will say that in a cast of characters defined by selfish intentions and conflict, she stands out not for any magnanimous virtue, but for a refreshingly self-aware and unapologetic defense of a self-centered worldview.

Perhaps ambiguity and a frustrating lack of resolution is the intent. There is no way to provide closure or actual justice for any of the atrocities in this country’s past. The skeletons in the closet can’t actually speak for themselves, but R. Eric Thomas reminds us that they wouldn’t forgive even if they could.

The recurring mantra “It was so much drama…” seems to be the only thing the characters in Safe Space can agree on. There’s the aforementioned workplace rivalries and family feuds. Then there are gay lovers’ quarrels, supernatural conflicts, and a mental balancing act between all-too-realistic politics and fantastical suspension of disbelief. There’s tension between urban and rural Maryland. There’s tension between the country’s dark past and selfish present and increasingly unlikely optimism for the future. And, of course, there are so many moments of biting racial tension you might strain a muscle.

There’s a scene in which Helen’s cool facade shatters and she exasperatedly delivers a monologue to her castmates about how they perceive and judge her whiteness—about the unfairness of being held responsible for the words and actions of other white people. “I am a person in a house I did not build,” she insists, “I inherited it…”

It’s a feeling I don’t think I’ve ever actually heard anyone express aloud before—she’s talking about her family home, but also about the city and the country in general and the impossibility of washing away the sins of the father (or even someone else’s father). The feeling that no matter how good of a person you think you are trying to be, you will always be viewed as the antagonist in this cursed former colony.

But this line is delivered in the midst of the plot’s hectic dissolution into a surreal slapstick farce with divergent, possibly contradictory climaxes. The scene resets several times, each resulting in the death of a different character and different confessions. In one, it’s maybe implied that Helen’s uncle chose to leave her his home, guns, and gold over her hapless, overtly racist brother because she would use them more effectively. Does this mean that perhaps her foundation (which pairs poor people with jobs in places like Target, selling items made by slaves we choose not to think about) isn’t actually well-intentioned do-gooderism? Is she wittingly advancing white supremacy, as her uncle would’ve wanted? In some iterations of the story, she’s hoarding gold and referencing a coming societal collapse. It’s one of several subplots that never seems to go somewhere.

It all feels a bit out of character, compared to the more consistent motivations of the others. But perhaps ambiguity and a frustrating lack of resolution is the intent. There is no way to provide closure or actual justice for any of the atrocities in this country’s past. The skeletons in the closet can’t actually speak for themselves, but R. Eric Thomas reminds us that they wouldn’t forgive even if they could.

Safe Space might haunt you with what can only be described as an emotional hangover. For all the lines and laughs and empathizing that can feel cathartic, there are slow-burning uncertainties (and quite a few ugly certainties) that stayed with me for days. It’s a bit like waking up the morning after doing drugs with a stranger you met in line for the bathroom at a party and ended up talking to for hours: At the time, it seems like you’re working through some issues, but when all the serotonin is gone you realize you didn’t really accomplish much. There’s just the crushing reality of how fucked everything is.