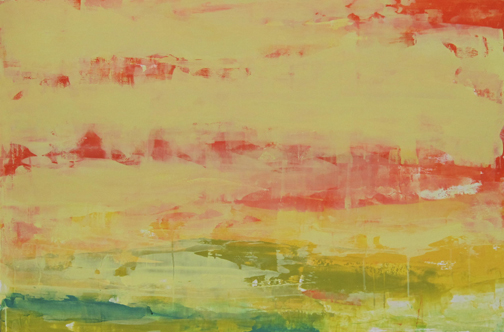 A Studio Visit with Regina Tumasella by Jill Gordon 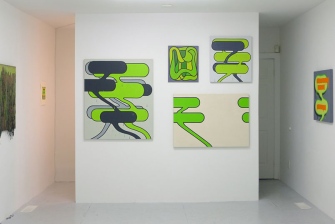 Green may be the color of our era. We talk now about “going green” to mean living in a more environmentally friendly way. And while this metaphorical use of the color has become big business—bringing in the other metaphorical green—the use of color in marketing is nothing new. In 1907, the Paint Manufacturers Association of America sent out a memo claiming that, “If we can guide or educate the taste of the house-mistress in respect to the colors in which her dwelling is to be clad, we control the entire situation.”

More recently, color specialist Leslie Harrington, a member of the Color Marketing Group, has been credited with the recent popularity of “wasabi” and other yellow-green colors.
http://citypaper.com/arts/visualart/meditations-in-green-1.1414826 It hardly matters that Vestibule was only a temporary art display erected during Occupy D.C., which was itself a short-lived protest over, oh, sort of everything involving banks and power. The sentiment lives on in a cursory statement from D.C. artist Joe Orzal that debuted as a piece of text-art at Vestibule that read, “Shit’s Fucked Up.”

Isn’t that just about the perfect Occupy statement? Shit’s fucked up and stuff. And shit is fucked up, so frequently—maybe even 99 percent of the time. Anyway, folks in D.C. appear to endorse Orzal’s sentiment. Kristina Bilonick’s Pleasant Plains Workshop adopted Orzal’s painting and turned it into a print last summer. Now the Pink Line Project is kicking out Shit’s Fucked Up T-shirts through a new Pink Line shop on Etsy. Art Fag City: Art Fairs: The View From The Top by Whitney Kimball and Will Brand

What a turd. Reporting from Art Basel Miami Beach, New York Times writer Patricia Cohen gets the exclusively super-rich take on class war. Unsuprisingly, they don’t get what the big deal is.

Cohen mentions the list of writers who’ve had it, like Sarah Thornton, Felix Salmon, Will Gompertz and Dave Hickey. She leaves the criticism at that; Thornton’s disgusted retirement from art market reporting is summed up with the quote “Money talks loudly and easily drowns out other meanings,” while Simon Doonan’s lengthy, hit-and-miss piece in Slate is boiled down to a quote about how there’re a lot of cheese platters.

Meanwhile, Cohen’s sources are given carte blanche to say whatever they like, without any response or fact-checking. Jason Rubell asks, “What do people want — to go back to the recession?” at a time when unemployment remains higher than it has been since the Great Depression. Nor does Cohen bother to counter Pace heir Marc Glimcher’s conception that “more people than ever before had developed an appreciation for art.” That’s an idea that you can only have at the top: auction prices are up, but museum attendance is down, and government support has been dropping here and abroad for years.
http://www.artfagcity.com/2012/12/10/art-fairs-the-view-from-the-top/ The Corcoran Gallery of Art and Corcoran College of Art + Design will not sell its longtime and historic Beaux-Arts home near the White House, the Washington Post reports. The museum and school, which began mulling a plan to sell its building and move elsewhere in June (as City Paper first reported), is staying put.

But while that question has been put to rest, plenty of others are still afoot—and they need answers. Among them: What “opportunities,” alluded to in the Post story, allowed the Corcoran to stay? Corcoran president Fred Bollerer and Board Chairman Harry F. Hopper III did not tell the Post how or whether the Corcoran has found a path to financial stability. If it hasn’t stumbled upon a surge of new money, what factors convinced them that they could remain in the building? What did the chain of decisions look like after they sought a valuation on the Corc’s historical landmark home—another figure leaders did not reveal?
http://www.washingtoncitypaper.com/blogs/artsdesk/visual-arts/2012/12/10/corcoran-to-stay-put-but-how/ For the past 12 years a sin­gle week in Decem­ber has seen the pop­u­la­tion of Miami swell by over 50,000 peo­ple. Drawn by the glit­ter­ing allure of the self-described “most pres­ti­gious art show in the Amer­i­cas,” atten­dants of Art Basel Miami Beach pack a sur­pris­ingly high pro­por­tion of unprac­ti­cal shoes to tramp around the more than 260 gal­leries which show in Basel proper alone, not includ­ing the dozens of satel­lite fairs and hotel shows.

Basel is one long cat­walk for the fash­ion­able and the hiply unfash­ion­able. (Sun­day morn­ing as the fair wound down, a woman in a head-to-toe felt dinosaur cos­tume was seen roam­ing the streets despite the 80 degree tem­per­a­tures). But, set­ting aside the sto­ries of pool par­ties, fash­ion faux pas, and peo­ple falling down, the expe­ri­ence of Art Basel Miami yielded a breath­tak­ing expo­sure to the pulse of con­tem­po­rary art around the world: the good, the bad, and the ugly. The name­sake fair, the largest and most high-end of the fairs, is held in the Miami Beach Con­ven­tion Cen­ter. It is gar­gan­tuan, and more than one day could eas­ily be spent roam­ing its halls. Top gal­leries from around the world, from Gagosian to Haunch of Veni­son, show here, exhibit­ing name brand artists like John Baldessari and Tracey Emin. http://blogs.citypaper.com/index.php/2012/12/basel-dazzle/ Gran Prix seems to suggest that rather than Baltimore being a place where artists tread water before decamping to the promised land of Bushwick, both Baltimore and Brooklyn are bedroom communities from which culture producers and consumers commute to the internet. Of course the Baltimore artists in this show produce work with similar concerns and aesthetic sensibilities as the New Yorkers. So do artists in Richmond, San Francisco, Chicago, and countless other places. But the paradigm is no longer that we all look to New York, it is that New York, along with the rest of the world, looks at Tumblr.
http://whatweekly.com/2012/12/12/nudashank-new-york-new-work/