The Tedium is the Message 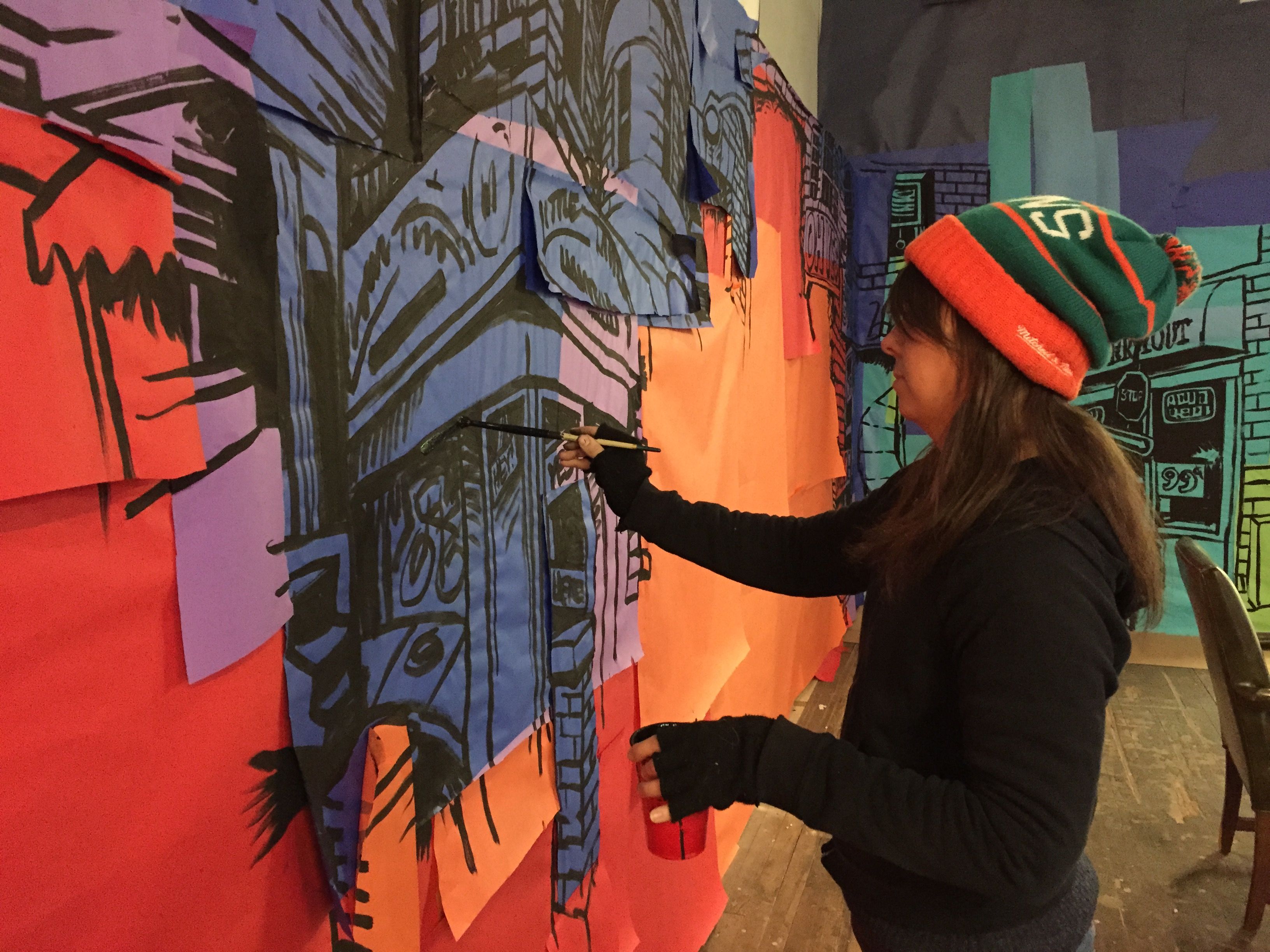 Performance: Music, Theater, & Dance
The Tedium is the Message 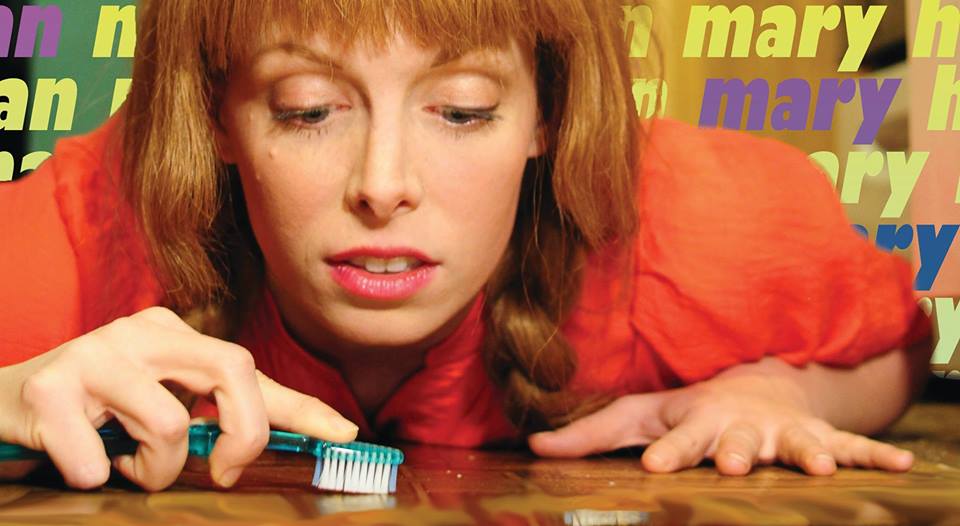 Mary Hartman (Carly Bales) looks a mess. The prim collar of her pert white dress is ruffled and torn. She’s hobbling around on one white high heel. Her speech zig-zags from one topic to another, as if searching for answers to questions she hasn’t been asked. She looks like a woman coming apart at the seams—and for good reason. A mass murder killed an entire family in the small Ohio town where she lives with her husband Tom (Ryan Kidwell) and daughter Heather (Madison Coan). Tom is no longer sexually interested in Mary, perhaps driven by his inability to, well, manifest his desire in the bedroom. Her efforts to talk to him about it—without confronting the issue directly—lead to arguments that are taking their toll on the depressively surly Heather. The police picked up Mary’s Grandpa Larkin (Conner Kizer) for running around flashing his privates in public. Worse, Heather saw the shooter responsible for the killings, and he subsequently takes Mary hostage. And by the end of Annex Theater’s inspired if imperfect adaption of the cult television show Mary Hartman, Mary Hartman, after the titular heroine has suffered through all the above tabloid events, she’s subjected to the worst indignity of all: appearing on a daytime talk show.

EMP Collective member and cofounder Maggie Villegas adapted and directed this production, and if the above plot summary sounds like a great deal to cram into a two and half hour play, understand that Villegas has gamely treated the short-lived 1970s soap-opera parody’s first season like a religious text. I wasn’t old enough to watch the half-hour Mary Hartman in its original late-night run over 1976-’76, but I am old enough to have caught episodes here and there in 1980s syndication before a few giant media conglomerates began selling us hundreds of cable television channels as the illusion of consumer choice. At the time, I didn’t quite grasp how complicated and satirical the show was. It followed a working-class family in a small town. That family’s issues were on the one hand pedestrian (garden-variety dysfunction) and preposterous (the mass killing). I didn’t recognize how the program was poking fun of consumerism, soap-opera plotlines, and 1970s American malaise in general. I merely thought it was odd.

Revisiting it years later on crappy VHS dubs and, eventually, DVD and youtube (binge watching the first 25 episodes is a good way to calibrate the brain for the play, but not necessary), I began to appreciate how genuinely weird and brazen the program is. Critic Claire Barliant’s East of Borneo essay “From a Waxy Yellow Buildup to a Nervous Breakdown: The Fleeting Existence of Mary Hartman, Mary Hartman” isn’t simply an astutely researched and originally argued exploration of the show, it’s a roadmap to understanding Villegas’ take and interest in the program. Barliant sees the show as an “attack on television itself,” an artifact from “an era when people were just becoming aware of the implications of being plugged in 24 hours a day.”

Barliant synthesizes a number of observations made about the program at the time. In addition to numerous periodicals writing about the show (Newsweek, People, Rolling Stone, Time, the Village Voice), a cursory literature search reveals how incisively Mary Hartman struck people, from Stuart Surlin presenting his paper “Mary Hartman, Mary Hartman: A New Genre of Prosocial Programming, or Just Another Soap Opera?” at the Annual Meeting of the Speech Communication Association in 1977 to A.L. Fanta’s “Mary Hartman, Mary Hartman as American Culture: Some Sociological Observations on the Social Construction of Reality” that appeared in the July 1977 issue of the Journal of Thought. This weird little show fascinated both academic and mainstream brains.

The everyday weird is right in the wheelhouse of adapter/director Villegas and her EMP cohorts (including Bales, the lead actress here), who have portrayed ordinary modern life as a slightly off existential nightmare since launching the collective in 2010. Some of these productions have been a bit more lysergically primed that others, but from the We’re All Gonna Die! debut through Condo Condo Condoland and even last fall’s Potatoes of August there’s a common thread: recognizing the horrifyingly ludicrous and ludicrously horrifying in average America, with its heterosexual dyads and nuclear families and television programs and advertising and 24-hour news cycles of outrage-slash-fear-mongering-slash-satiety in the status quo. To such a sensibility, Mary Hartman, which first aired before anybody under 39 was born, is practically a Rosetta stone.

And this adaptation reveres the program, to good and problematic ends. Scenic designer Emona Stoykova ingeniously treats Annex’s Chicken Box HQ as a TV studio, setting the small seating area up as a series of risers opposite a simply dressed stage. The play takes place in this single intimate area, with minimal scene changes—backdrops rising and lowering, tables shuffled and turned—to change from Mary’s home to the police station to a storefront to a bowling alley. It’s one of the play’s deadpan meta-jokes: Mary Hartman infamously aired without a laugh track, and the audience cracking up at any of the script’s many guffaws gives the play the beats of a conventional television sitcom.

That ’70s glow permeates the production. Costume designer Samantha Bloom outfits the cast in a selection of bright and, pure guess here, permanent-press blends. The few props—a small TV with rotary channel dial atop a metal stand; a simple kitchen table—are intentionally functional but static. Annex’s Mary Hartman is a colorfully drab realm, a place where ripe fruits wither on the vine.

The production less successfully aims for that delicate vibrant-decay balance in terms of pacing and performance as well. Alexis Tantau has a blast with the plum role of Loretta, Mary’s aspiring country-and-western-singer friend who is both madly in love with her husband, Charlie (Antonio R. Collins II), and in some ways the play’s comedic straight man. Mary’s sister Cathy (Sarah Jacklin), a casually liberated single woman on the show, becomes a more droll, contained presence here. As Mary’s husband it’s refreshing to see Kidwell be a source of inward insecurity; his Tom comes across like a guy who fears that admitting what he’s thinking and feeling might only make things worse. Kizer is the scene-stealer. He plays Grandpa Larkin with the kind of cantankerous overdrive that Burgess Meredith gave Mickey in Rocky. Why read lines when you can scream them?

Bales, like Louise Lasser in the original show, isn’t simply tasked with being the main character here but the subject/thematic nexus and unstable particle. Mary Hartman is one version of an average post-1960s American woman, and she’s a physically ignored, product- and TV-obsessed, and anxiously upbeat housewife. The unraveling of her mind and self is the result of her ordinary, working-class life of TV-watching and being a mother and housewife in small-town Ohio. Bales nails the role, effortlessly moving from jittery good cheer to faux product placement asides, from strained intimacy with Tom to chatty denials about Grandpa Larkin with the police.

The slight problems come in efforts to maintain some of the mannerisms that defined the television program. The sheepish, furtive eye motion that Lasser made two of Mary Hartman’s signature move works well in a close-up shots on a TV screen; in the intimate confines of the Annex’s theater, the same behavior makes Bales’ Mary Hartman look like she’s searching for something on the ground. More vexing, the play feels to adhere to the show’s offbeat flow: a great deal of plot happens, but it unfolds in the chopped-up mise-en-scene of a laugh-track-free televisual vocabulary. Onstage those breaks start off as effective awkward pauses but never build into anything more, which doesn’t drive the play to its chaotic, ambiguously melancholic end with any insistence.

That’s frustrating, because how Villegas distilled the TV show for the stage is quite sly: she treats Mary Hartman’s journey as a disaster epic. In this case it’s not an airplane or skyscraper or luxury ocean liner that’s plunging people into danger; it’s Mary Hartman falling into the chasm between how she imagines her life could or should be and how it actually is. And like the TV show, the play recognizes that part of how Mary believes her life could or should be is shaped by the media she consumes—specifically, television. What Villegas and this production add to that equation is performance—particularly, cultural reproduction.

When you first enter this play, the TV set prop plays a loop of television commercials from the 1970s, with spots for Tab, Schlitz beer, Wheaties, TidyBowl, Crisco, Folger’s coffee. Interspersed among these artifacts are six commercials made by the production. Only a few cast members appear in both live play and recorded spots, one of whom is Bales.

It’s a relatively minor appearance and easy to miss if you’re not paying close attention, but it’s a clever choice. Bales/Mary Hartman is her own feedback loop: If the TV program offered one version of a 1970s American woman, this play’s version of today’s American woman is an actress who both plays a woman shaped by television ads and who appears in television ads. To get pretentious about it: if history repeats itself first as tragedy, then as farce, what about the third time? Or the twelfth? The one hundredth? As Barliant notes in her East of Borneo essay:

“The illusion of controlling media means that it’s easier for media to control us, turning us into human conduits that disperse information. In other words, we no longer watch commercials, we are commercials. So maybe MH2 is relevant today not necessarily out of nostalgia or curiosity about the seventies, but rather an interest (or nostalgia) for an Audience that was merely in on the joke, rather than actively circulating it. ”

Annex and Villegas’ Mary Hartman has the potential to tear into the hostile desperation of that self-reflexive circulation, but it never quite works up the momentum to bare its teeth. Even more than its source material, the play recognizes soap opera‘s history as an American genre born out of the marriage of serial narrative and consumer products. Only today’s products aren’t just household cleaners and diet sodas and breakfast cereals; they’re entertainments and stories and the people who make them. Life isn’t experienced; it’s curated, watched, edited, and saved for rewatching under the illusion of mercenary individuality, akin to the notion that with a consumerist act you can buy your redemption from being only a comsumerist.

That this production doesn’t quite reach that intensity of critique feels less like a minor flaw than missed opportunity. It successfully jostles you between giggles and despair as it follows Mary Hartman’s descent into ordinary anxiety, all the while spicing that journey with savvy observations that don’t consistently reinforce the play’s manic drive. As a heady slab of DIY theater Mary Hartman ambitiously reimagines a cult TV show for the stage, but in noticing all the little details that the cast and crew included in the service of that adaptation, it could be so much more. For more information and tickets to this production click here.