Give a Gift to Baltimore 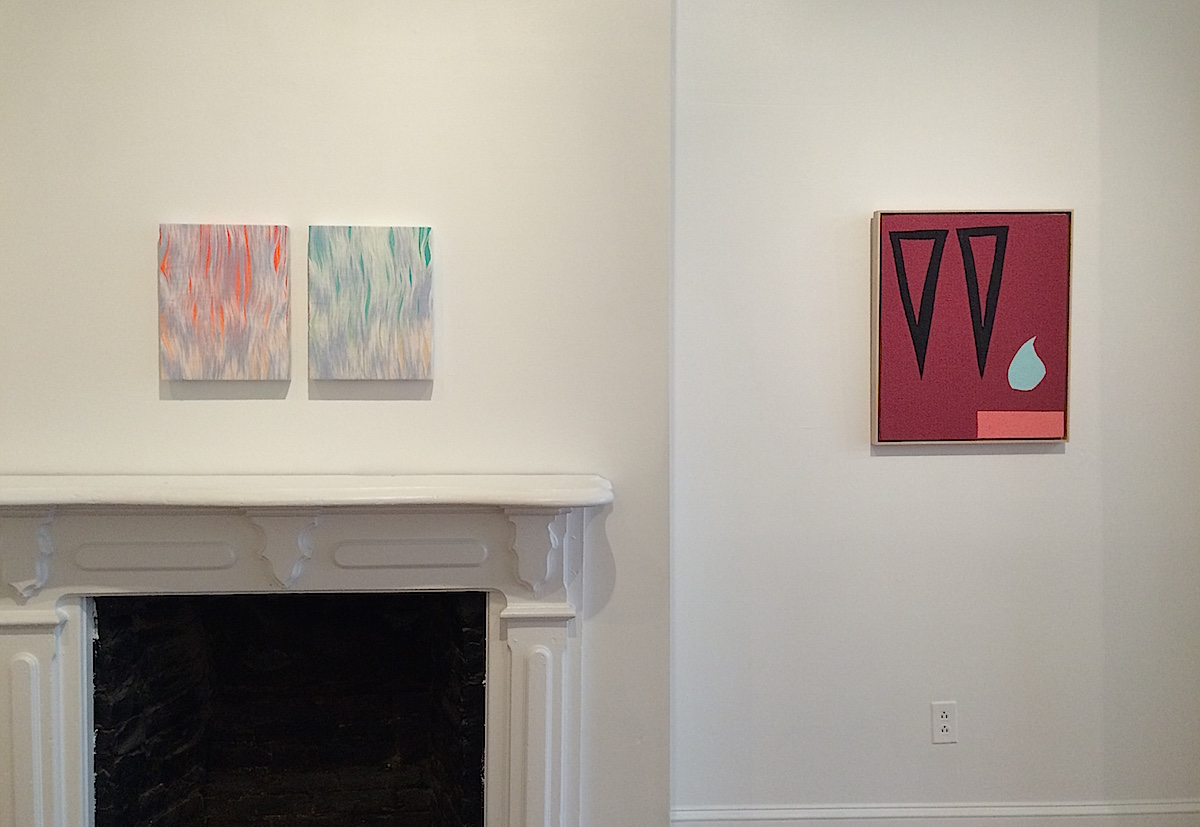 Performance artist Alexander D’Agostino has built a reputation for provocative, fun, and visceral work. His newest project, The Swan: A Serial Killer Ballet was performed on Dec 12th and 13th at the E.M.P. Collective. Not only is the piece dark and magical, it challenges viewers to reconsider gendered assumptions about the history of ballet, and explores queer expression, creative failure, and even the powerful pain behind the film Black Swan. Rowan Fulton discussed this performance with D’Agostino while it was still fresh in his mind.

Can you talk about the performative events you have staged in the past, and (if at all) how they influenced your work on The Swan?

In the past I’ve asked people to shove nails and goat heads for a cleansing ritual, or had a dinner argument with a pig head, and made fake tits out a sheep hearts. Making work that uses gore and gesture to illicit feelings of fear, arousal, and in a strange way, compassion, is a something I’ve been digging at in a lot of my work.

I want people to have empathy for the struggles and situations the characters and personas I investigate. But I also want people to feel that unsettling sensation. Being uncomfortable brings stuff to the surface. You can grab what bubbles up with humor and the otherworldly illusions of light, dance, and installation and transform people, or at least get people thinking and feeling.

Your new performance seems to serve as a contemporary retelling of Swan Lake. Do you feel that there are direct parallels between this ballet and queer culture/activism?

I’m not so much retelling Swan Lake as I am dissecting the original choreography for The Dying Swan. The movement is very simple, and lends itself to a lot of improvisation as far as how and when you move through crucial gestures and steps. The dance creates an illusion of a floating dying swan. It’s incredibly simple, but also very physically demanding. Something about this balance between the etherial and physically exhausting has always captivated me. Swan Lake took the simplicity of the original dance and expanded it into a very patriarchal structure of love, power, and lust.

I took The Dying Swan and filtered it through my own subversions and metaphors. The killer has an idea to bring justice to a swan from their home town that was decapitated for a twisted joke. White swans mate for life, and spiral into depressions and suicidal tendencies when their mates expire. A group of kids really did that at a duck pond in my hometown. Personal narratives allow the authentic and relevant to show up. The killer thinks that recreating the decollation of St. Jean the Baptiste as Salome when seducing, will bring him to a transcendent space where they can access the swan, a bloody transformations of sorts. I do think of this all as offering and ritual. Ballet is ritual. Creating work that allows people to experience a situation of dance and performance art becomes a ceremony. Its dark and morbid, but is tempered with humor and camp.

The character of the Swan in your performance “becomes obsessed with seducing and destroying the… Prince Charmings” that inhabit Grinder, Tinder, and Scruff. Is this negativity in contemporary dating apps what prompted your creation of this character?

The gender binary is imbedded into almost everything, and there seems to be a queer art of noticing and subverting it. In my case, the story fleshed out the somewhat noble art of failure… That’s pretty dramatic, but something about that feels like a metaphor for queer struggle. Specifically the ways in which gay men assimilate to cultural standards of misogyny and white supremacy in order to find acceptance and grace within the world.

On Grindr you see a lot of white supremacy and misogyny. You find a lot of bro-dudes into “white only”, “no femmes”, “masculine acting” blah blah blah. It seems logical that the frustration one feels encountering this sort of homonormativity could be remedied and made visible through a production like the swan. The blood, ballet, and gay sex make sense to me. Metaphor… its a queer thing.

Is this the Swan meant to be a hero or a villain?

Both. He has an antihero fairytale villain vibe. Villains become crucial to the structure in classical ballets. They challenge the systems of power with the threat of (fabulous) doom and destruction. The swan is incapable of escaping a logic that allows them to justify their actions.  He is stuck on picking out some an aspect of patriarchy present in each victim and allowing that to justify his actions. The swan is incredibly flawed, self-absorbed, and disconnected from reality. You get some insight as to what may have triggered his blood-lust, but nothing too assuring. I think its up for the audience/participants to decide.

What prompted your decision to blend gore with Swan Lake? Were you looking to any particular sources of inspiration?

It’s about offering and ritual, creating work that allows people to experience a situation of dance and performance art becomes a ceremony. The notion of sacrifice being a ritual to make something sacred seemed to blend with the intense offering of pain and blood that goes into ballet. It might be more an homage the The Black Swan than Swan Lake.

I wanted to create something that allowed the influence of other ballet horrors and thrillers (the film Livide, or The Red Shoes, or Dario Argento’s Suspira) to emerge. Classical ballets are always about the prince, the princess, and the villain. The audience is generally rooting for the princess to win her love so the kingdom can be a happily-ever-after situation. Those aristocratic narratives exclude most people, so it seemed like blending gore in ballet was like thinking about the history of the guillotine regarding wealth, class, and what we do with those in power who enjoy the fancy life while people are suffering and in poverty.

Does your background in painting influence your performative work in any way?

Of course. The Baroque image, the idea of light and texture, history and composition [influence my aesthetic]. The body, space and experience become a layer beyond paint, but there is still a sense of bringing an idea to the surface that I first discovered in painting. I think it made sense to grow beyond painting into performance even when I was a painting major at MICA. I was really into the scatological physicality of paint. The blood dripping everywhere, covering the bodies could also be linked to Viennese actionists and Abstract Expressionism if you want to go down that road.

What do you see as the distinction between ballet and performance? Does your work lean more towards one or the other, or somewhere in the middle?

I am a performance artist and use mostly dance and movement research to structure my ideas and content. Ballet is a very specific language of dance that I use and subvert. My work takes a lot of the structure and basic notions of ballet and meshes them with the movement research I spend most of my own studio time doing. Ballet’s history is super important to my work. The whole of idea of dancing with the legs turned out to show an offering and openness to the court seems, the impact that can have on the body long term, and how that idea of subservience to the kingdom can be embodied into a dance is fascinating.

The etherial female, the swan or fairy dancing en pointe is seen as graceful and effortless. A lot of broken bloody toes and physical strength goes into pointe work that is in direct contrast to the dainty flower movements that end up being the dances we see.

There is a quiet pain and violence in ballet. You go to class and everyone looks worried about not getting the steps. It seems socially acceptable to celebrate flaws and imperfections in a ballet class. I like that. The balance of shame and discipline is ridiculous and fun.

In no way am I creating classical ballet. I am taking what I find relevant to the ideas I’m pulling together to create the performances and dances like The Swan.

How would you describe your practice as a whole? Do your various focuses (teaching, curation, dance, etc.) intersect in your practice?

I think a lot about the idea of shapeshifting. We move from one form to the other, but are ultimately the same at the core. That’s my practice in a way. I have to teach movement. The Asanas of Yoga and movement research help me understand the human body in practicum. Teaching allows me to get out of my head, which is super necessary at times. I can develop ideas in my head more rapidly when I’m working with bodies, as well as my own.

The same goes for putting together other artists’ work and in collaboration. I’ve co-curated Queer Pulse for the past few years with EMP director Carly Bales. Getting to make space for work addressing the many issues, concerns, and realities of the LGBTQ community is an important aspect of my own practice. Art is a dialogue, and curating and collaboration have helped it all feel more like a conversation. I feel that the multitude of experiences I have as human helps me to create more layered and engaging productions. I have a lot to pull from as far as influence/inspiration. 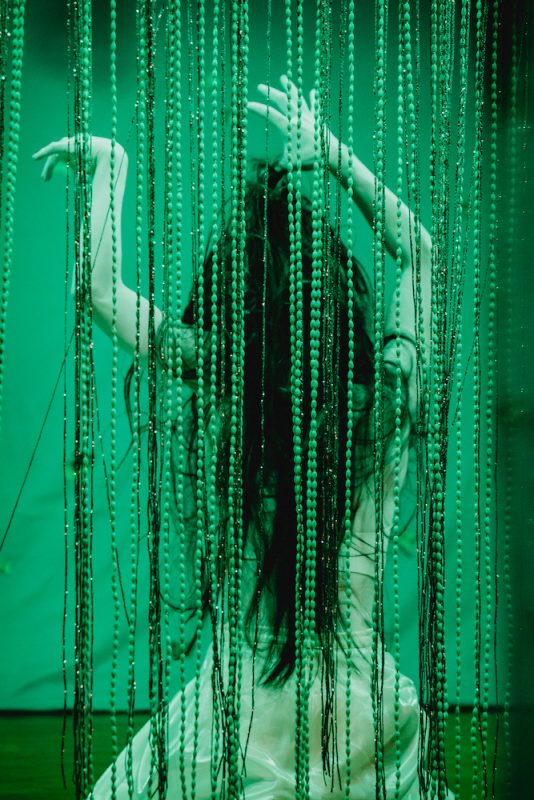