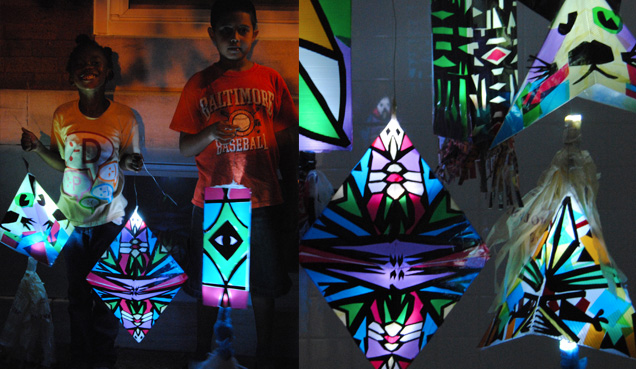 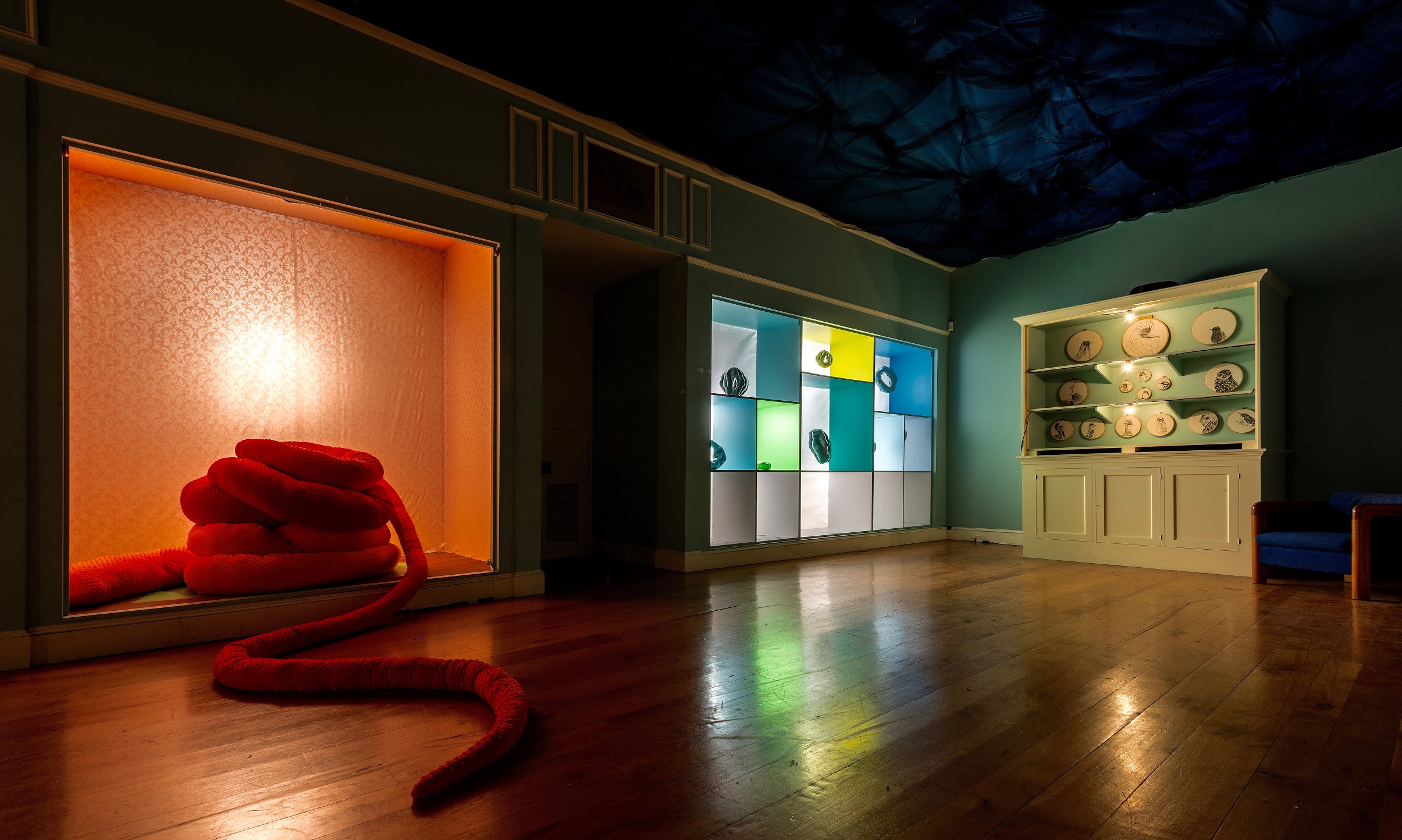 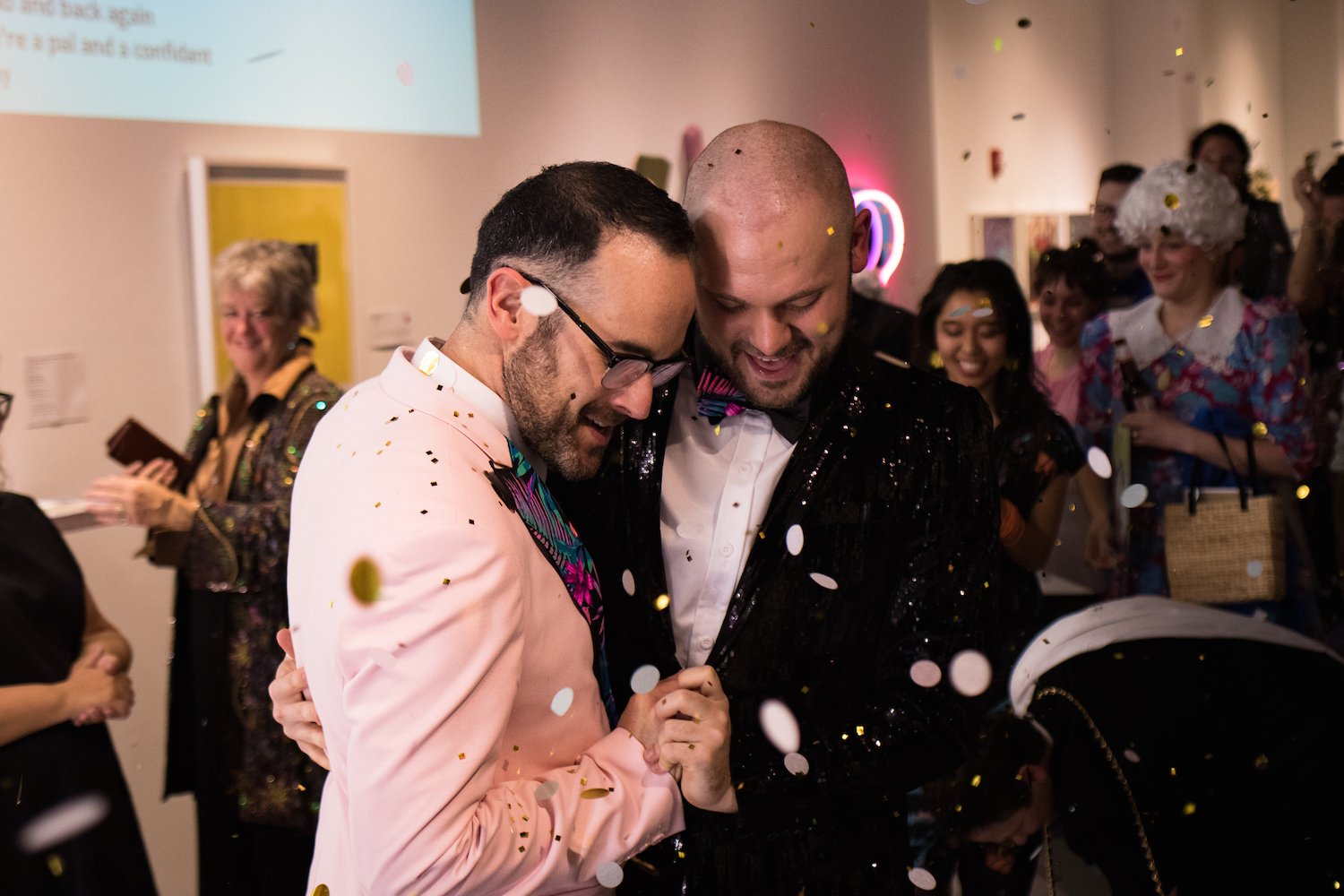 Miami is Nice is a Golden Girls-Themed Exhibition, Lecture Series, and Wedding that Challenges Traditions by Cara Ober

The global wedding market  is a $300 billion industry where romance has been manipulated to such a high degree that getting married is often the most expensive endeavor of one’s life, aside from buying a home. Although wedding traditions appear to be governed by an iron (or platinum) fist, it’s shocking to realize that major retailers invented most of our customs — including the white dress, diamond ring, and gift registry — in the past 80 years. What is most alarming is how little Americans deviate from capitalist hetero-normative wedding practices, despite the legalization of same-sex marriage in 2015, and how divisive weddings remain — for couples, extended families, and all who believe that love, not your gender or race, determines the right to marry.

Who better than artists to challenge and reclaim this oppressive system as a unique declaration of love? In Baltimore, two artists have upended the traditional wedding, realizing it as a month-long gallery exhibition and queer performance series. Miami is Nice, hosted at SpaceCamp, a cavernous artist-run gallery, features work by 45 artists from across the country and looks nothing like a traditional wedding, except for the cheesecake station, but manages to celebrate the aesthetics and values of grooms Zachary Z. Handler and Nick Horan in a variety of unique ways. 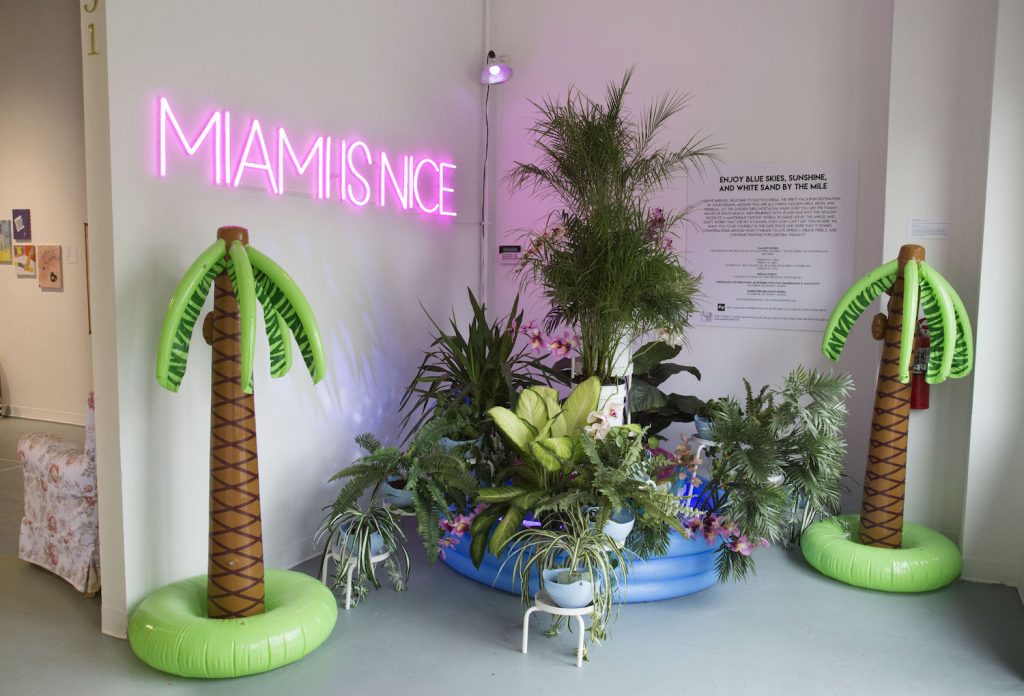 After Handler, a photographer, and Horan, a dancer, got engaged, they made a decision to plan their wedding around The Golden Girls, an 80s sitcom featuring four feisty older women living together in Miami, who became queer icons for addressing serious political and social issues including the AIDS crisis, gay rights, female sexuality, and interracial marriage. In the end, Handler and Horan decided to curate a thematic exhibition as the setting for their union.

“I love you so much, let’s make art together for the rest of our lives,” Handler remembers saying when he proposed to Horan during a live dance performance at Artscape. “I had to rip the pantyhose off of his face and he said yes. And then we immediately began planning. We wanted to host our wedding in an art gallery – but what if we don’t like the art? What if we curated our own show?”

“We wanted to create something that felt authentically like us, but that doesn’t back away from our politics,” agreed Horan, speaking in the gallery a week before the public opening reception. “It was a fun realization, the wedding traditions that could be subverted and destroyed, and then put back together by two gay men, especially in the age of Trump.” 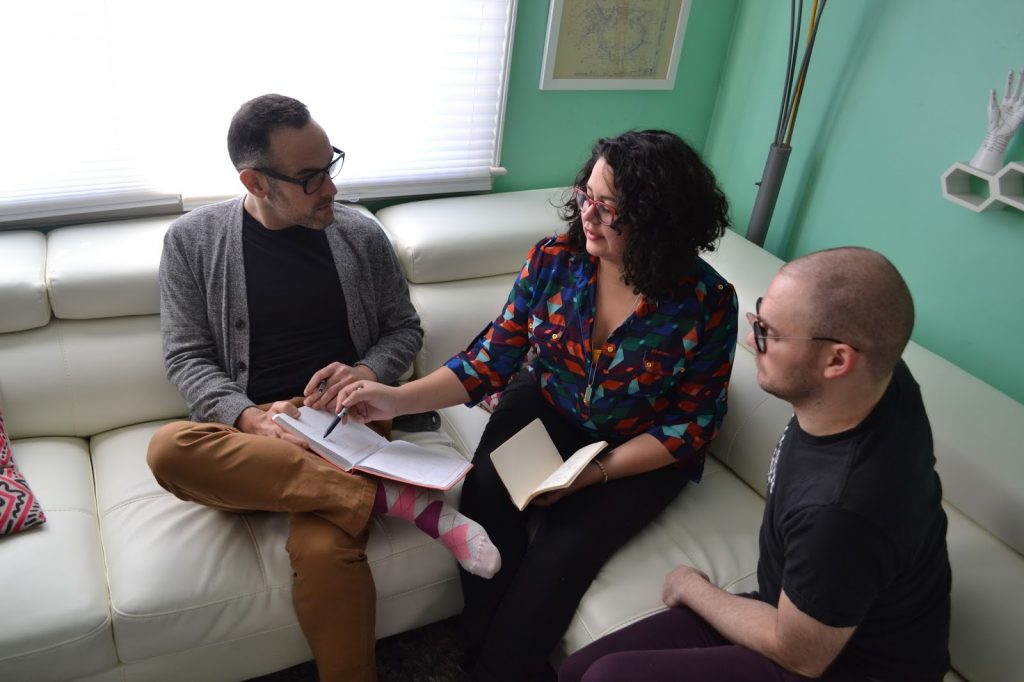 Since Handler and Horan had little experience curating an exhibition or planning a series of public events, they partnered with Michelle Gomez, a contemporary curator who runs Creative Unions, an event planning company designed to integrate contemporary art into celebrations, and Carlyn Thomas, curator at Terrault Contemporary in Baltimore to plan all the details, including a national call for entry asking for gay-, Miami-, wedding-, and Golden Girls-inspired artwork.

The objects in Miami is Nice run the gamut from something you’d find in a traditional art gallery to home decor. Pink neon and gold glitter proliferates, with a glittery toilet seat designed by Diza Hope that makes even a trip to the loo a special event. A site-specific installation by Gary Godbey, Horan, and Handler features 400 copper Jell-O molds proliferating up a gallery wall and around a corner like a metallic tornado — an over-the-top declaration of domestic ‘80s bliss. 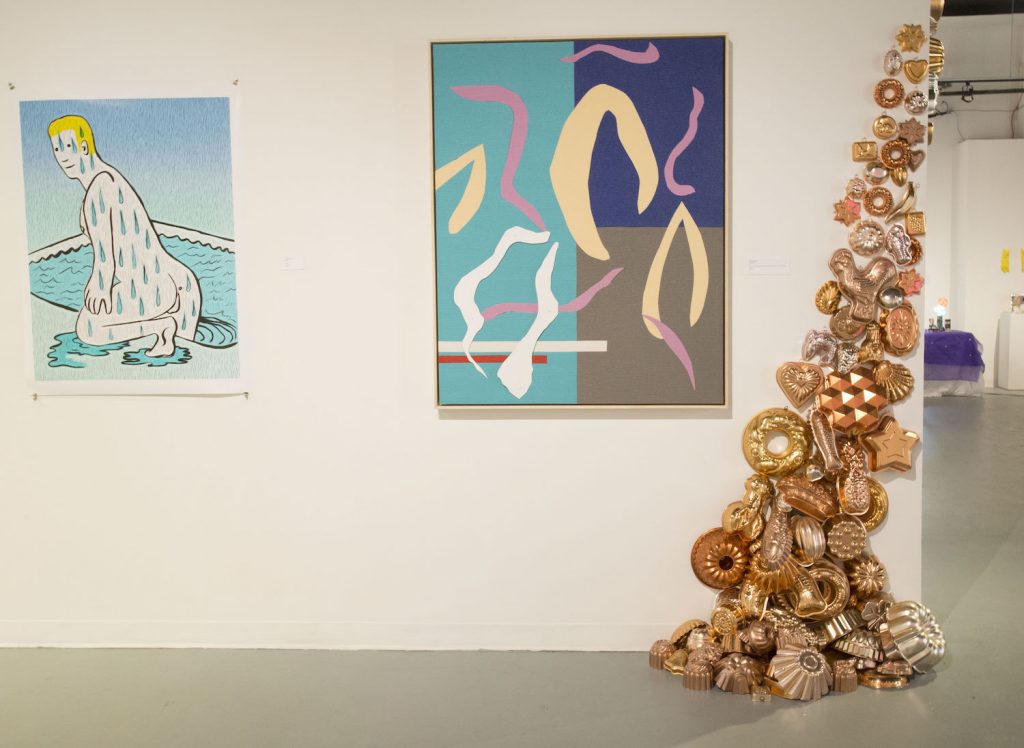 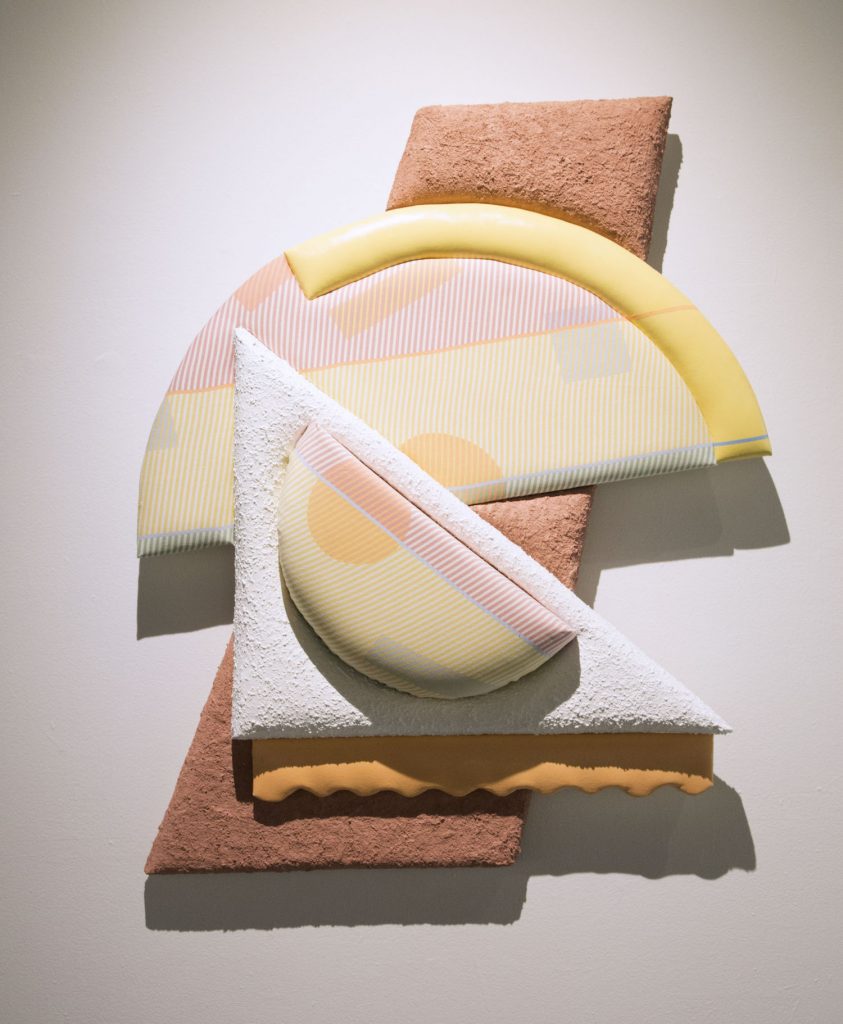 A number of the works deal with gayness in the 80s and the difficult process of coming out, where living in the closet was required. Richard Manaba’s digitally manipulated nude portraits in fleshy pink, suspended from the ceiling with silver chains, communicate the hidden-in-plain-sight sexuality of gay men at this time.

In one of the most compelling works, Handler and Horan recreated the boudoir of Golden Girl Blanche Devareaux as a photobooth station, featuring the original wallpaper and bedspread. Next to the bed, jewelry by Anne Stringer is available to try on and wear in your photo. Adding to the retro feel of the bedroom, several brightly colored wall-mounted telephones with curly matching wires are available for a listen. The piece, titled “Proposal” by Tiffany Threadgould and Kat Tingum, features audio documentaries of Southern LGBTQI seniors sharing their coming out stories. 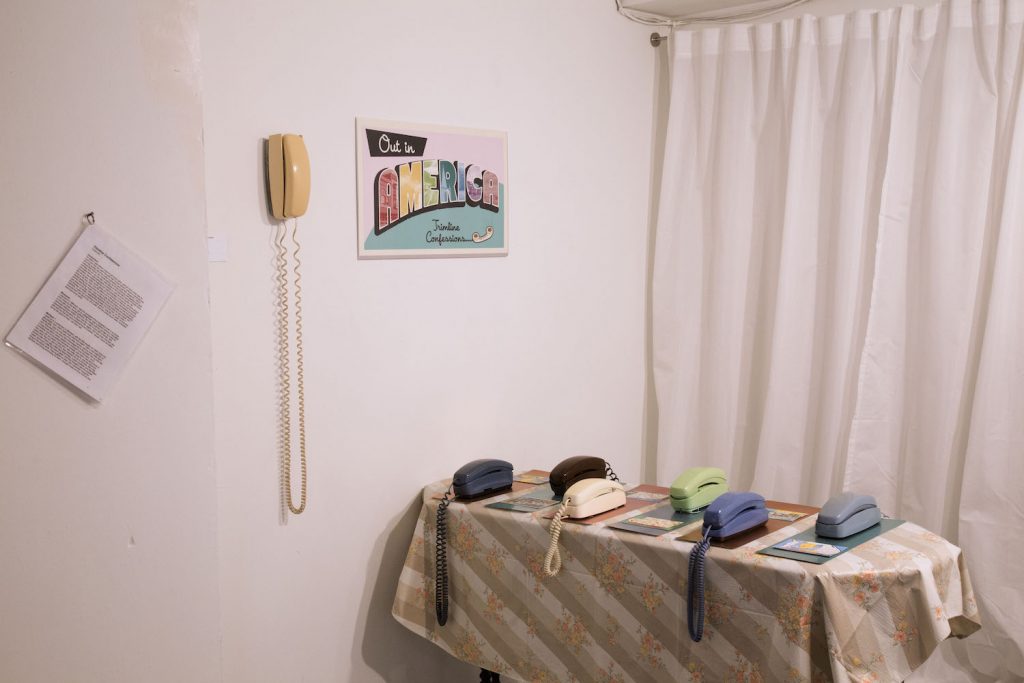 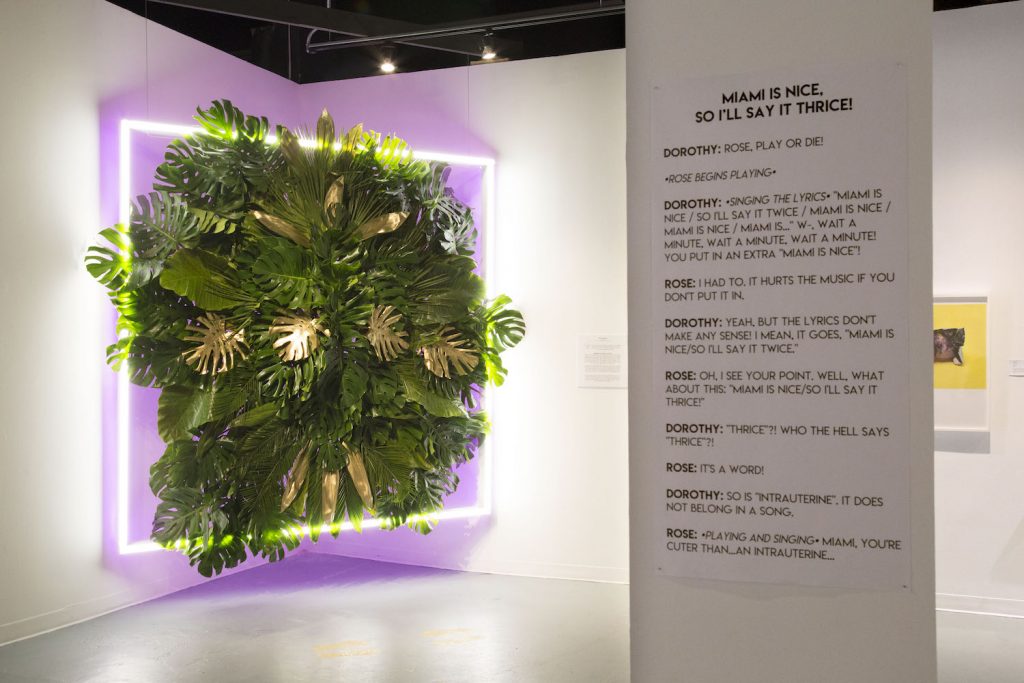 The wedding altar was designed specifically for the grooms by Anya Mizani and is one of the most dramatic pieces in the show. Comprised of a human-sized pink neon rectangle, it’s filled with large, faux tropical leaves in green and shiny gold. Not just an altar for the ceremony, this piece reinforces the dramatic spectacle of the wedding as a performance.

During the wedding ceremony, Kate Folson and Sarah Beth Oppenheim performed original choreography where two separate entities merge into one, borrowing moves from classical and non-traditional dance, with additional performances throughout the evening. Even the wedding vows were punctuated with interactive artwork. Each guest was given a print by Jimmy Malone to hold up, presenting a purple sea of the four Golden Girls’ faces, a symbolic gesture of friends and family. 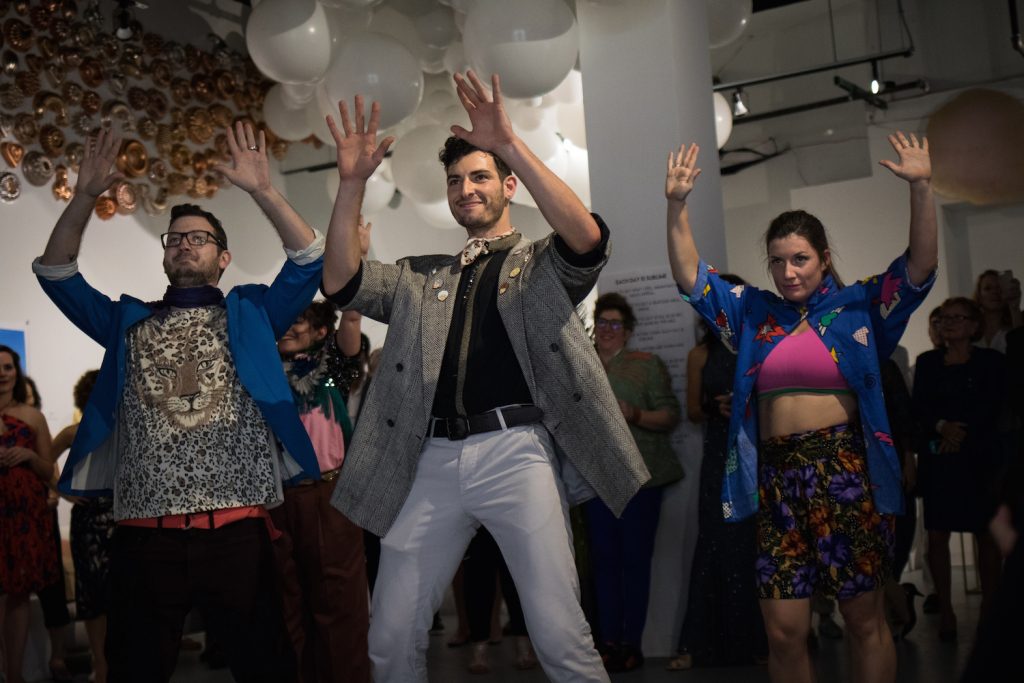 Here, the art takes on an active role, used for various utilitarian purposes: touched, held, waved, worn, and, in the case of Blanche’s bed, slept in by the grooms over the course of the month. While it’s not unusual for contemporary artwork to be interactive, this exhibit challenges the boundaries of art for art’s sake, transforming works of art into objects to be used for a functional purpose, building a connection between object and audience and breaking down boundaries between a curator’s authority and a viewer’s natural inclination to interact, transforming the art gallery into a nostalgic playground and LGBTQI safe space.

The ceremony, which was invite-only, was held a week after the exhibit’s public opening reception, which garnered several hundred attendees. Days after the wedding, the couple also hosted a public “Cheesecake Conversation” with Golden Girls writer Stan Zimmerman and “Out on The Lanai: A Golden Girls Podcast” host H. Alan Scott. Finally, the closing reception, on October 28, will host an evening of “drag, poetry, music, dance, and community” with artists from Baltimore, Philadelphia, and Washington DC. 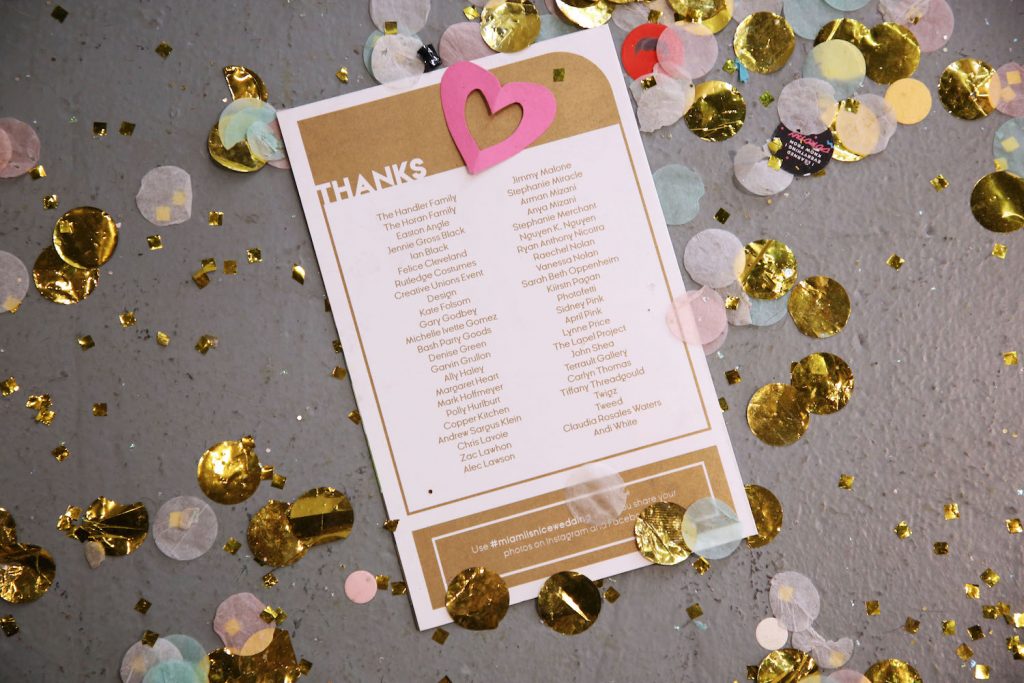 What’s interesting about all of the different events embedded in Miami is Nice, including the opening, wedding, and additional programming, is their cohesion and diversity. This project makes you aware of just how much space exists within the contemporary wedding tradition to subvert, destroy, and rebuild what, for many humans, is the most sacred event of their lives.

Regardless of whether married folks realize it, all weddings are a performance where rehearsal, props, makeup, and setting come together to communicate the values that will govern the rest of their lives. Placing contemporary visual art into the center of your wedding is not a universal solution to the problem of lame, overpriced hetero-normative weddings, but it cracks open a window that has been purposefully jammed shut, drawing an invigorating breath of fresh air into a stale institution in need of revival. Handler and Horan have, with the help of art, built a vision of a life worth living, and celebrated like it’s 1989.

Catch the closing reception this Saturday, October 28 with a night of poetry, drag, and performance in the gallery!

Photos courtesy of Miami is Nice, with installation photos by Akea Brown and wedding photos by Kiirstn Pagan, and boudoir shots by Pixilated Photo Booth.

* *Many many thank you’s to Hyperallergic editor Elisa Wouk Almino for her patience and hard work editing this!